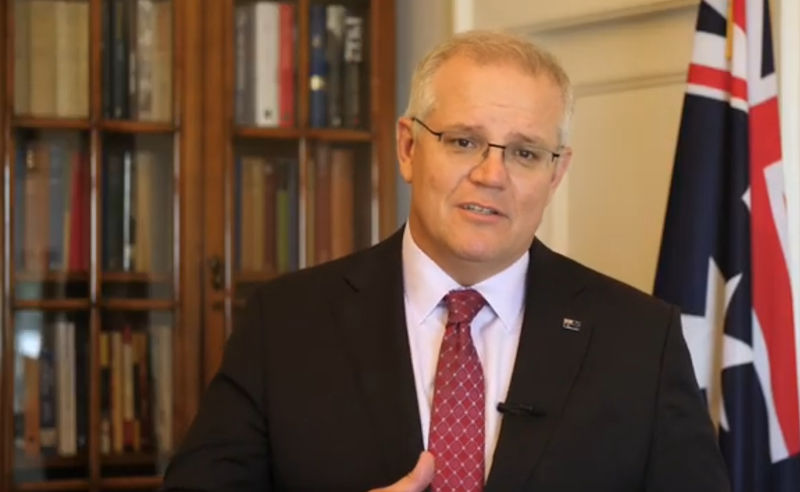 The faith that has sustained the morale of Scott Morrison through many a dark period of his life is in for some further testing over the few months that will bring an end to this term of government.

Last time about, three years ago during an election campaign few thought he could win Morrison saw an encouraging sign from above in the image of an eagle on a wall.

He read the message as a divine command to persevere against the odds and the doomsayer. He came to see in his “miracle” victory an indication of God’s personal blessing on his policies and a cheerio on his campaign methods, perhaps including the diversion of money to Liberal marginal seats. With such support, who needs to take the advice, the feelings, or the wisdom, of others into account? Or to take the slightest notice of those who questioned his honesty, his integrity or his obedience to the law and conventions of government?

This time about, the entrails and the haruspices look even more grim. Nothing has seemed to go right for months. The only net positive for Morrison since Guy Fawkes Day has been appearing on 60 minutes, to be outrated by Vera. Worse, disastrous occasions are repeating themselves, not least in the form of a trial occasioned by natural disaster – this time floods – which demonstrated that he has learnt nothing, even on the empathy front, since the bushfires of 2019-20. They have also reinforced one of the prime opposition lines against him: that Morrison is very slow to appreciate that he is a problem, that he dithers about, usually blaming others, for too long while the problem festers and becomes a crisis for the government.

He then makes decisions that are too little and too late, the worse for containing some defiant insistence that he was right on the issue all along. For those he ought to be listening to, including his ministers and a panicking backbench, it leaves an increasingly bitter taste, if only because they lack his faith that staying the course on its present bearing will avoid the landslide that the polls, and most people’s gut instincts are suggesting. Even loyalists doubt his ear for public opinion, his nose for a problem, his feel for workable and popular solutions, and his vision for the sort of Australia the nation might expect if Morrison is re-elected. It is simply too late to change the helmsman, but it is not too late to seize some control of an election campaign that seems headed for a cliff.

Morrison and his more senior colleagues have spent months trying out lines and slogans that might hurt Anthony Albanese and the opposition generally. A few have been disastrous – including the try-ons about getting government out of our lives, and about the virtues of can-do capitalism. These are not for proclamation to Australian families flooded out of their houses, left for a week to their own resources and community volunteers, before an agonisingly slow, and initially very inadequate arrival of the ADF. The ADF itself is not to be blamed – except for their habit of making public relations and marketing the top priority of any mission. They are getting the bad press because government was too slow, and initially, too unwilling to order them in.

We got a hint why only a few days after the crisis had reached its peak. Morrison announced plans to increase the size of our armed forces by about 25 per cent over the next 20 years. He’s trying to make us anxious about war with announcements about Ukraine and submarines. He should be criticised not only for announcements with no action, but for trying to create a divisive electoral issue out of not much separating the parties.

In most cases, what is being announced are projects and promises which, even assuming they are implemented, will not make much difference to the Budget bottom line in the next term of government. It is PR pie-in-the-sky, neither binding on future governments nor the present one.

An incoming government could have a review of defence decisions brought forward for crude election purposes and would have no problem in getting official advice about examples. It could well drop half of them (in crude dollar value terms) without having any serious impact on our defence posture, policies or capabilities. Even the decision to purchase nuclear submarines, probably for delivery sometime after 2040, does not require a host of immediate follow-up decisions. That’s assuming we want the boats to have modern 2040 software and hardware, not those of the present generations of British and American nuclear boats already up to 40 years old.

If tanks can make it into the order books, we have already reached peak defence dollar – buying more than we can need or use. Or we are buying the wrong stuff?

Still less should the government be announcing decisions – not properly subjected to scrutiny – about buying at an expense of tens of billions, conventional battlefield equipment, such as tanks and armoured vehicles, that will never be used within 10,000 km of Australia, and certainly not in China, the “enemy” we are currently thinking about.

The poverty of the Army agenda, reinforced by its complete lack of strategic or political success in any hostile engagement since the 1950 war in Korea, invites questions about whether any of the imagined extra defence regulars in the 2040 ADF should be special forces, cavalry or rifle-soldiers – in an Army command, as opposed to in Navy, the air force or any other body, such as space command. Perhaps they might be designated as marines and be the nation’s first port of call for a supplementary emergency service for floods, fires and earthquakes.

There may be good reason for recruiting more military personnel – although the cost of recruiting and paying them is only a fraction of the cost of training them, retaining them, and looking after them effectively until death, especially after separation. We have an increasingly sophisticated and educated workforce, less used to operating in authoritarian environments, and rightly sceptical  about the calibre of military management and leadership as well as uncomfortably aware of how politicians have been politicising the use put to defence, without sufficient resistance from military leadership. That’s something compounded, of course, by evidence of the capture, by particular interest groups and ideological sects, of some intelligence, security, counterterrorism and police functions. Service to the nation, like public service, is supposed to be something altogether different from being a praetorian guard to and striking force for the political interests of the government of the day.

It was embarrassing to be watching the government dithering about over ADF assistance for a week after the floods were at their peak. It seemed there might have been some secondary agenda, with Shane Stone, a Liberal Party president and head of an emergency fund, as to whether the wretched inhabitants should be allowed to rebuild in such a dangerous place. It made me think of Darwin, the money sink over which Stone once presided, at least thrice levelled by the elements and always revived at public expense.

Even less convincing was the argument that defence services cannot be called upon at the drop of a hat, let alone when it is wet, or movement is difficult. Full deployment does take time, but the services are more than capable of putting boots on the ground – if they are asked to do so. Nor, for once, were they being embarrassed by over-extension abroad, although Covid duties were preoccupying a tiny proportion of the grossly over-staffed senior officer corps.