Morrison’s day of reckoning may bring down his temples 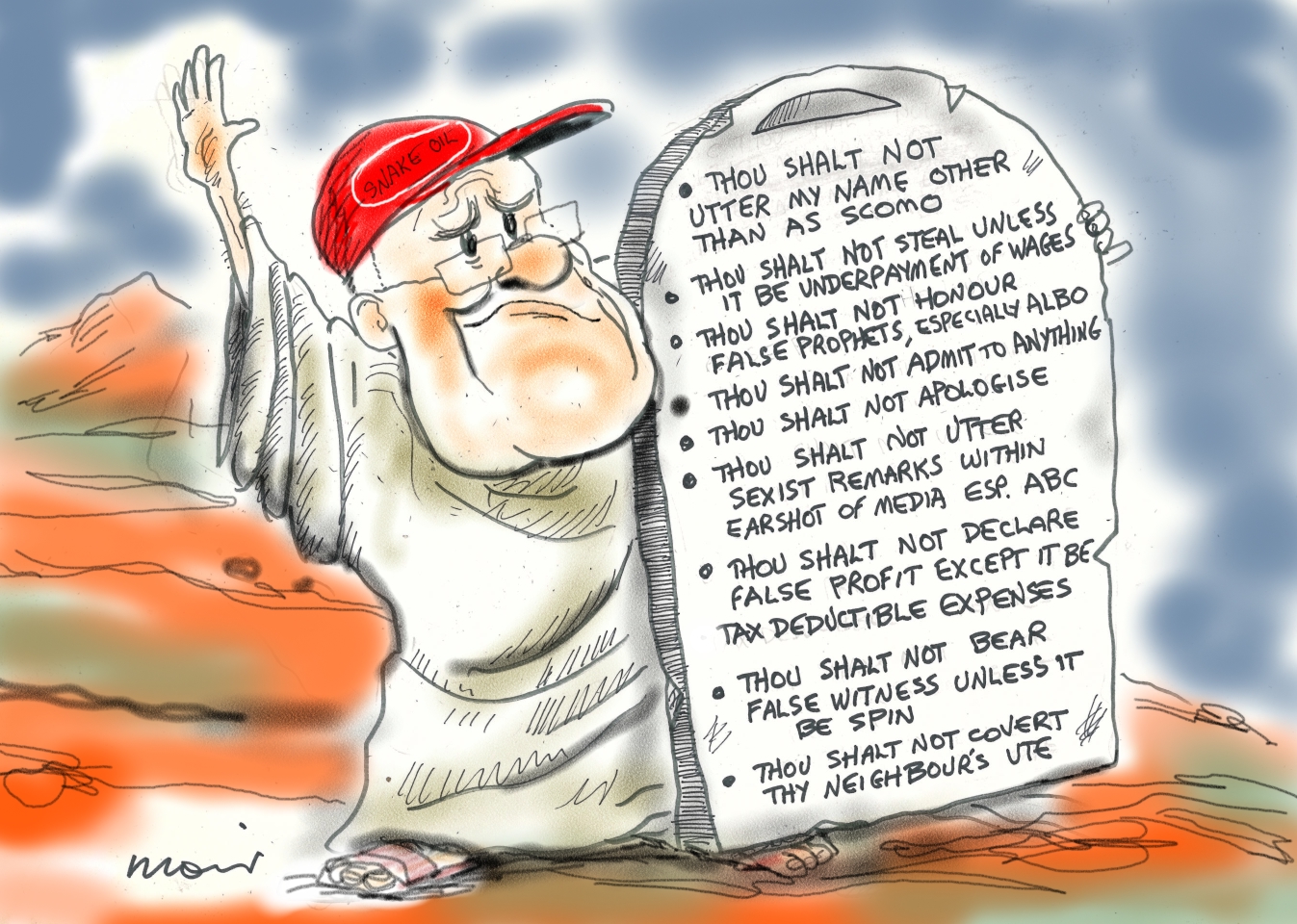 It’s all very well to have a prime minister who believes that he has been anointed by God for his task, and is thus above some of the checks and balances imposed by law and by custom on the mere mortals who have preceded him. Experience and the career so far of Donald Trump suggest, however, that a day of reckoning will come when either human chicanery or an act of omission by God deprives him of his mandate. Even assuming he goes with good grace, it is doubtful that the structures and styles he developed in government can or should endure.

A reversion to constitutional government involves the end of government by decree – the spending of money by ministerial whim, authorised not by appropriation and the processes laid down by law, but by ministerial discretions inserted into legislation. The deviation from proper practise was greatly potentiated by pandemic economics, and the determination of government that money put into the economy would go through the private sector – generally through mates and cronies of government – rather than through the public administration and the processes it has developed to ensure wise stewardship of public funds.

It involves a reversion to accountable government, subject to administrative law and freedom of information legislation. And it involves proactive measures to ensure the probity of government action, whether by ministers, by public servants or public officials – sometimes even by people and structures, such as the political parties, given access to public funds, resources and rights.

One of the problems for a reckoning could well end up being relations between government and church organisations – not least some of those, such as Morrison’s Pentecostal movement, which have secured tens of millions from discretionary grants by government. The artificial labels put on some of these subventions might be argued to prove that these were not direct subventions to religion. But a critical constitutional court might well find that in practice they breach fundamental principles of the separation of church and state. If that happens, the consequence of a brief period of Morrison rule may well end up being the compromise of some of the temples he has helped establish.

The Australian constitution protects freedom of religion – including freedom of being of no religion if one wishes. The Commonwealth – and I think the states, though this is not entirely certain – are not allowed to establish any particular religion as the official religion of the country – perhaps, as in Britain and many places in Europe with a paid clergy.

Government cannot ban any religion – for example, Islam, or any particular religious cult or sect – for example the Jehovah’s Witnesses. Nor can it set any sort of religious test as a qualification for government office.

The United States has a similar section in its constitution, and the interpretation there is slightly different from ours. There are some folk who think that the freedom of religion provisions originally meant that one could not discriminate against different protestant sects, but that one could discriminate against Catholics or Jews, Muslims, Hindus or Buddhists. As in Australia, the US has readily approved measures which benefit all religions – without favouring any in particular. The obvious example involves very big tax breaks for religious organisations, including offshoots involved in education, health care or foreign aid.

But the American courts are far warier about schemes that produce excessive “entanglement” between Church organisations and the state. If, for example, governments give subsidies to both government and religious schools to advance some proper purpose – such as literacy – a system of requiring all schools to acquit their grants, show how they have spent it, and what results they have achieved, might be regarded as producing excessive entanglement.

The Australian Catholic church considered as a single unit spends more money from government than the state of Western Australia.

Various religions in Australia receive enormous support from the state, if never directly so as to advance a particular religious agenda, ideology or system of belief. Major religions, such as the Catholic church, receive government subsidies in maintaining schools and school systems, in providing hospitals and health care, in providing aged care and care for children in institutions and the community, and in providing welfare services for people in need. The Catholic church considered as a single unit spends more money from government than the state of West Australia. That’s on top of exemption from rates, goods and services taxes, income from investments and taxes on surpluses – never, of course, called profits in non-government institutions. Its agencies get their money because they are providing services – generally although not always without discrimination – that otherwise governments state and federal might have to provide.

Some churches have also been adept in obtaining government grants – including through increasingly discretionary funds administered directly by politicians such as operated with Sports rorts – for projects such as sporting facilities, building and grounds security, or for providing, under government contracting out, services administering unemployment, disability and welfare services. Often the terms of such sub-contracts involve clear arrangements that would be in difficulty under the American entanglement doctrine, as where, for example, taking the money involves a duty not to criticise the government.

Long before sects of American origin, such as the Pentecostals, arrived on the Australian scene, there was vigorous debate about the role of religion in the public square. It was, for the first 60 years of federation complicated by intense sectarianism, particularly against Irish-Catholics. Many believed that “state-aid” for schools was constitutionally forbidden, even under schemes where aid went equally to all groups.

There is lasting bitterness about the pattern of distribution of government money, particularly to non-government schools, many of which are obviously far better off than even the best state schools, yet still receiving enormous subsidies. But there may be a special type of anger going for secretive payments to groups such as the Pentecostals.

First, although they have become incredibly influential within the Morrison government, the total number of Australian adherents is very low – less than 0.2 per cent of the Australian population. There will be an inevitable tendency to think that the generosity has been more a matter of inside connections than any intrinsic merit. Other, bigger, and more mainstream faiths may have little to complain of, in terms of the money they have been receiving, but they have not received funds through the same pipelines. And the worldliness and opulent lifestyles of some of the leadership – as well as scandals affecting leaders of some congregations – reinforces a sense that need was not the primary consideration.

Some have suggested that any sort of Labor attack on such relationships will backfire. It would be used to argue that Labor does not respect the morally conservative views or the beliefs of ordinary decent “quiet Australians” who attend church and are worried about the long-term impact of “permissive” laws, such as on same-sex marriage. But neither the beliefs nor the lifestyles of such people are under attack. The revenue and the power are as ever going to the top. The hands Scott Morrison is laying on others have been in the taxpayers’ pockets.