MUNGO MACCALLUM. The patience of our first nation, while remarkable, is not inexhaustible.

Whether we like it or not, it doesn’t take much for racism to come out of the underbelly of this country. We only have to think back to Cronulla in 2005. And of course the Adam Goodes story just last year. 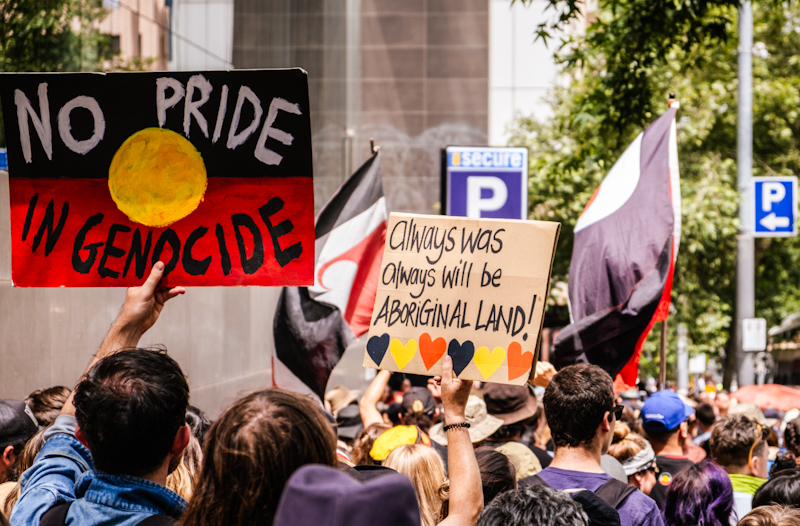 So Reconciliation Week has come and gone – and also gone is 46,000 years worth of priceless history pulverised by Rio Tinto in the Juukan Gorge.

An unfortunate error, apparently – the merciless miner didn’t really know what it was doing, and although some of the indigenous locals asked it to desist, it had already laid the explosives and apparently could not remove them.

And to be fair, Rio Tinto normally has reasonable relations with those whose neighbourhoods are to be detonated and bulldozed. It is not malice aforethought, just a bit of negligence. An oversight, and of course it won’t happen again.

But it will, because Rio Tinto, like so much of the Australian ethos, is not greatly exercised by the concerns of our first nations people. Or, as the old political truism contends, there are no votes in Aboriginals.

Which is the deeper and more depressing reality of Reconciliation Week. At a time when Australia is debating a reset of the nation in the aftermath of the COVID 19 disaster, once again the chance to involve indigenous Australians as serious participants is to be sidelined and ignored.

Typical is the government’s latest bandaid: an Office of Indigenous Policy Evaluation, a wizard wheeze from the economy-obsessed warriors of the Productivity Commission. The bean counters reckon that the problem is that there is just not enough evidence about what works and what doesn’t within the hundreds of policies and programs administering Indigenous Australians, and that yet another well paid team of bureaucrats will fix it.

To which some of the more restrained Indigenous leaders reply, politely, as always: bullshit. As they have repeatedly pointed out, the biggest issue is that setting top down arrangements from the government rather that empowering the people involved and letting them make their own decisions has failed. It has turned citizens into clients, even to victims. It is not only counterproductive – it is seriously demoralising. Whatever the answer is, we can be sure it is not the installation of a new bunch of shiny bums from Canberra.

So once again we are confronted with the spectacle of police violence, a teenager being battered to the ground for being rude to a cop. And once again, the justification is that the policeman was provoked – the obvious retort that the teenager had also been provoked was considered irrelevant.

And as America tears itself apart in racial warfare, we congratulate ourselves that we don’t do it like that – it is all peace and harmony in our successful multiracial society. That is, if you ignore that terrible statistics of the unclosable gaps, and the fact that 432 of our indigenous citizens have died in police custody since the Royal Commission of the issue had been published and largely ignored nearly 30 years ago.

It’s also best if you forget all the other injustices, miseries and atrocities inflicted on those who until recently had been incapable of getting their voices heard in the cacophony of triumphalism over mainstream obsessions about such vital matters as rising house prices and franking credits.

But somehow we don’t, or at least quite a few of us don’t. Reconciliation Week also presented a revival of the push for recognition – real recognition, not the ersatz version espoused by Scott Morrison and his sadly pliant minister Ken Wyatt. The great call of the Uluru Statement from the Heart is still resonating, with more influential backers coming on board. And the overall polling remains favourable – support for the Uluru statement is not universal, but there is a clear majority.

A referendum in this term of office would obviously be difficult: the bigots, racists and professional demagogues would fiercely oppose as divisive – their chutzpah remains unbounded. But if the main stream, a bipartisan commitment from parliament, plus a voluble section of the most influential sections of Australia, can be brought on board, it would probably succeed.

And the terrible example of America should make us consider the alternatives: reconciliation or anarchic violence? The appalling television showing the killing of George Floyd has triggered protests around the world, and the demonstrations in Australia have developed quickly to include local grievances.

The rallying cries of “black lives matter” and “I can’t breathe” are just as urgent in Australia as they are in the United States – possibly more so, as the inequalities are less well publicized. At least the American television networks have ensured that people, even the most reluctant legislators, cannot avoid paying attention.

Here there is a tendency to sideline abuses or brush them aside – for instance, the risible excuse from NSW Police Association secretary Pat Gooley that the cop who flattened a teenager and broke his teeth on the road may have been having a bad day. Well, he may have, but not nearly as bad as his helpless victim. And, we can suspect, not nearly as regularly. The systemic imbalance of the system has made it all too obvious that all too often black lives do not matter – or at least not as much as police solidarity

But in the context of the American experience, trivialising this long-standing conflict is not only inappropriate, it could be downright dangerous. As Labor’s shadow minister for Indigenous Australians puts it, “whether we like it or not, it doesn’t take much for racism to come out of the underbelly of this country. We only have to think back to Cronulla in 2005. And of course the Adam Goodes story just last year.”

We like to be a bit smug about ourselves, rejoicing that in this instance at least, we are not like America. And we’re not – not yet. But there are ominous signs: as we saw in Minnesota, it only takes one extra atrocity for society to explode. And the patience of our first nation, while remarkable, is not inexhaustible.

Should it run out, the demonstrations may turn into riots, and the riots develop into the kind of burning and pillage we have watched, appalled, on the American TV networks. And if that does happen, reconciliation will not be a matter of justice, fairness and decency. Even for those most opposed to the cause, it will become a question of self-interest, and at worst, survival.

Mungo MacCallum is a veteran political journalist and commentator. His books include Run Johnny Run, Poll Dancing, and Punch and Judy.
mungomccallum@staging-johnmenadue.kinsta.cloud