The Australian Bureau of Agricultural and Resource Economics and Sciences farmpredict model finds that changes in climate conditions since 2000 have cut farm profits by 22% overall, and by 35% for cropping farms.

The current drought across much of eastern Australia has demonstrated the dramatic effects climate variability can have on farm businesses and households.

The drought has also renewed longstanding discussions around the emerging effects of climate change on agriculture, and how governments can best help farmers to manage drought risk.

A new study released this morning by the Australian Bureau of Agricultural and Resource Economics and Sciences offers fresh insight on these issues by quantifying the impacts of recent climate variability on the profits of Australian broadacre farms.

The results show that changes in temperature and rainfall over the past 20 years have had a negative effect on average farm profits while also increasing risk.

The findings demonstrate the importance of adaptation, innovation and adjustment to the agriculture sector, and the need for policy responses which promote – and don’t unnecessarily inhibit – such progress.

Measuring the effects of climate on farms

Measuring the effects of climate on farms is difficult given the many other factors that also influence farm performance, including commodity prices.

Further, the effects of rainfall and temperature on farm production and profit can be complex and highly location and farm specific.

To address this complexity, ABARES has developed a model based on more than 30 years of historical farm and climate data—farmpredict — which can identify effects of climate variability, input and output prices, and other factors on different types of farms.

Cropping farm revenue and profits are lower in dry years, with large reductions in crop yields and only small savings in input costs.

Effect of climate variability on rate of return 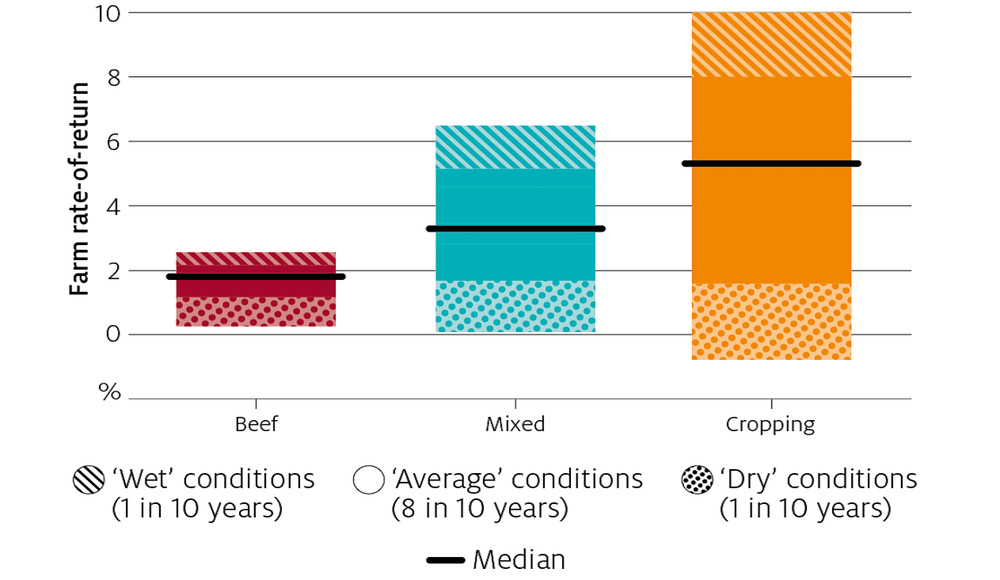 In contrast, drought has a smaller immediate effect on beef farm revenue, because in dry years farmers can increase the quantity of livestock sold.

However, drought also lowers herd numbers, which lowers farm profit when herd value is accounted for.

Australian average temperatures have increased by about 1°C since 1950.

Recent decades have also seen a trend towards lower average winter rainfall in the southwest and southeast.

This drying trend has been linked to atmospheric changes associated with global warming.

However, while global climate models generally predict a decline in winter season rainfall across southern Australia and more time spent in drought, there is still much uncertainty about what will happen in the long term, particularly to rainfall.

ABARES has assessed the effect of climate variability on farm profits over the period 1950 to 2019, holding all other factors constant including commodity prices and farm management practices.

We estimate that the shift in climate has cut average annual broadacre farm profits by around 22%, which is an average of $18,600 per farm per year, controlling for all other factors.

The effects have been most pronounced in the cropping sector, reducing average profits by 35%, or $70,900 a year for a typical cropping farm.

At a national level this amounts to an average loss in production of broadacre crops of around $1.1 billion a year.

Although beef farms have been less affected than cropping farms overall, some beef farming regions have been affected more than others, especially south-western Queensland.

Like previous ABARES research this study finds evidence of adaptation, with farmers reducing their sensitivity to dry conditions over time.

Our results suggest that without this adaptation the effects of the post-2000 climate shift would have been considerably larger, particularly for cropping farms. 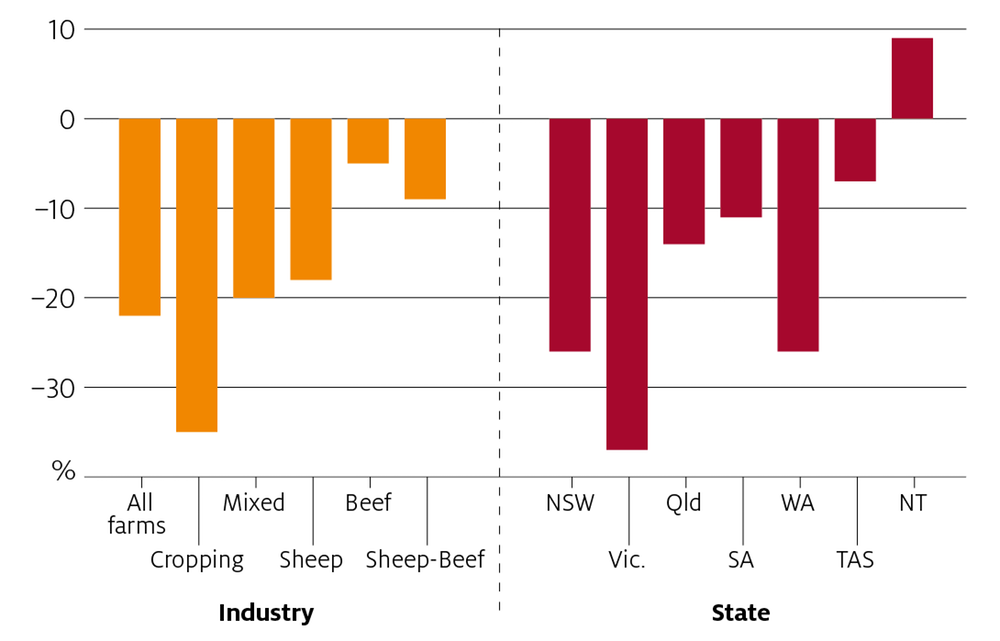 The changed climate conditions since 2000 have also increased risk and income volatility.

This is particularly so for cropping farms, where we find the chance of low-profit years has more than doubled as a result of the change in climate conditions. 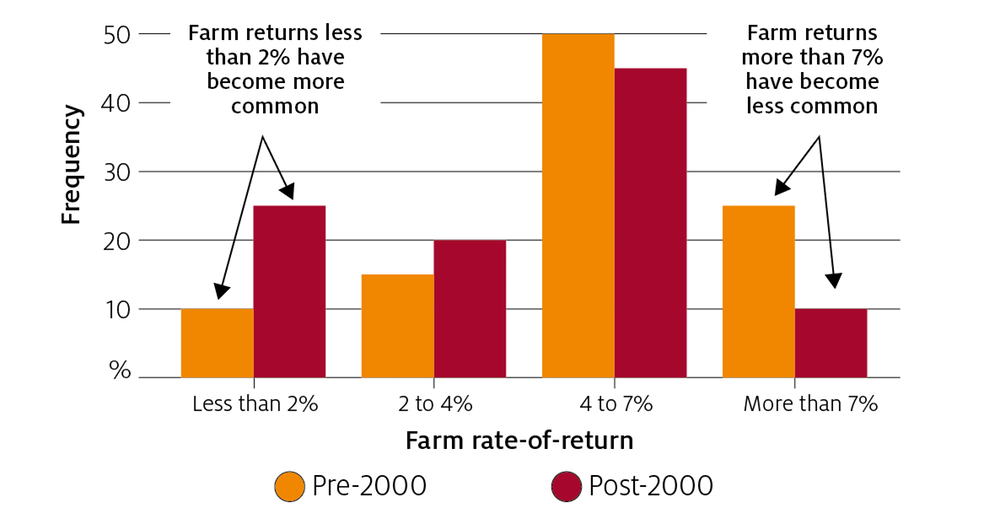 Read more: Helping farmers in distress doesn’t help them be the best: the drought relief dilemma

For these reasons, the strategic intent of drought policy has shifted away from seeking to protect and insulate farmers towards the promotion of drought preparedness and self‑reliance.

The best options for reconciling the drought policy dilemma focus on boosting the resilience of farm businesses and households to future droughts and climate variability, including through action and investment when farmers are not in drought.

The government’s Future Drought Fund, which will support research and innovation, is a good example of this approach.

Developing new insurance options is one worthwhile avenue of research which could provide farmers a way to self-manage risk. It would require investments in data and knowledge to support viable weather insurance markets: where farmers pay premiums sufficient to cover costs over time.

Supporting farm households experiencing hardship is legitimate and important, but for the long term health of the farm sector this needs to be done in ways that promote resilience and improved productivity and allow for long term adjustment to change.

(Despite the growing national and international crisis of global warming and the cost to Australia farmers,the National Party continues to be led by climate sceptics.Its leader Michael McCormack told us that climate change ‘does not mean we all need to listen to a government grant seeing academic sprouting doom and gloom about climate change’.How much longer must our rural sector endure pain before the National Party decides to respond on climate change and stop selling its soul to the mining sector.

On the same day that Hughes and Hatfield-Dodds released their report we learned that the the wine harvest in the Hunter and Barossa was at risk with heat and smoke. Will the National Party ever learn! John Menadue)