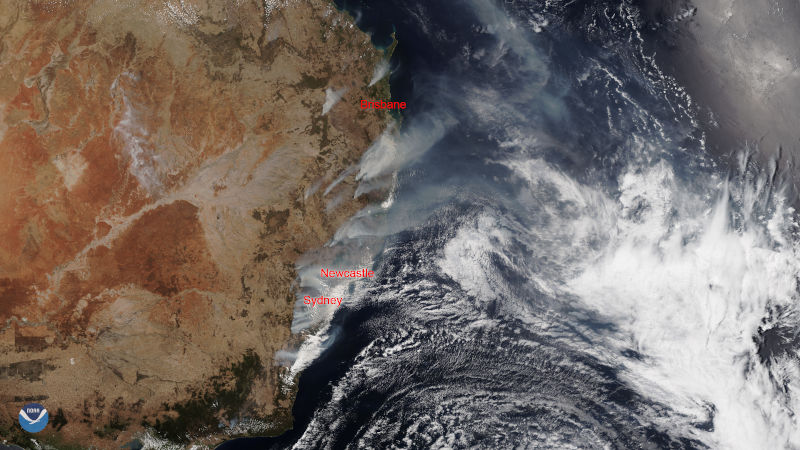 As climate change intensifies, so do cascading and compounding impacts and risks. Image: Commons Wikipedia

As climate change intensifies, we are now seeing cascading and compounding impacts and risks, including where extreme events coincide. These are placing even greater pressure on our ability to respond. While the work of adaptation has begun, we have found the progress is uneven and insufficient, given the risks we face.

These findings are from our work as co-authors of the new Australia and New Zealand chapter in the Intergovernmental Panel on Climate Change 6th Assessment Report on Impacts, Vulnerability and Adaptation, released today.

What does the report mean for Australia?

This new report represents the efforts of over 270 climate change experts to review and synthesise the latest information. These authors collectively examined over 34,000 peer reviewed publications about how climate change is affecting ecosystems and societies, future risks, adaptation enablers and limits, and links to climate resilient development.

Climate change is bringing hotter temperatures, more dangerous fire weather, more droughts and floods, higher sea levels, and drier winter and spring months to southern and eastern Australia, amongst other changes. These changes are increasing the pressure on our natural environment, settlements, infrastructure and economic sectors including agriculture, finance and tourism.

In low-lying areas along our coasts, where so many Australians live, homes, infrastructure and ecosystems will be lost to the rising sea if mitigation and adaptation are inadequate.

For our farmers and the agrifood sector, climate change brings unwelcome stresses and disruptions, making it more challenging to produce food profitably and sustainably. Intensified heat and drought will place yet more stress on our rural communities, particularly in Australia’s south-west, south and east.

Australians will experience more deaths and ill health from heatwaves, as will our wildlife.

The threat of cascading impacts

Unfortunately, that’s not all we have to contend with. We have identified two new types of climate-related risk.

The first are the cascading, compounding and aggregate impacts on our cities and towns, roads, supply-chains and services, emerging from the interaction of disasters like wildfires, floods, droughts, heatwaves, storms and sea-level rise. Think of the rolling impacts from the Black Summer bushfires, which killed people and wildlife, destroyed homes and resulted in major economic losses for tourism, farming and forestry. Or think of the ongoing floods in New South Wales and Queensland.

The second is the slow speed at which governments and institutions are moving to deal with these changing risks, undermining the system-wide adaptation needed. What does this mean in practice? That the scale and scope of what we can expect to see happen may overwhelm our capacity to respond to these impacts – unless we address these risks quickly and strategically.

Climate impacts are powerfully and unevenly amplified by existing stresses affecting our environment and people. For instance, Australia’s coral reefs already face threats from pollution and invasive species. Climate change acts as a threat multiplier. Climate change will pose more of a threat to vulnerable Australians, such as those with inadequate health care, poor quality housing and unstable employment.

We examined how much the projected damage could be reduced through better adaptation such as changes in policy, more effective planning and technical solutions. Our ecosystems most at risk are our world-famous coral reefs and the huge biodiversity and ecosystem services they provide. Steadily warming oceans and sudden marine heatwaves have already pushed many areas to the edge.

The Great Barrier Reef is already at a very high risk of crossing a critical threshold where further warming may cause irreversible damage. Between 2016 and 2020, three marine heatwaves struck the Great Barrier Reef, causing major coral bleaching and death. Once the coral is gone, many of the fish and invertebrates do not survive.

In typical conditions, it takes a minimum of a decade for the fastest growing corals to recover from a single bleaching event. We are no longer in typical conditions. Warming beyond 1.5℃ would see marine heatwaves strike more often. Bleaching will go well beyond the reef’s natural ability to regenerate.

If we fail to address underlying vulnerabilities in our society and fail to reduce climate-related risks, we will make climate change impacts even worse and undermine our capacity to adapt, well into the future.

But if we step up adaptation now, we will see benefits both in the near- and long-term. This includes practicalities like making sure all strategic planning, land use planning and infrastructure developments take complex climate change risks into account – in a systematic, rather than siloed, narrowly focused, way.

On the positive side, Australia’s adaptation efforts have increased in ambition, scope and implementation across governments, non-government organisations, businesses and communities since the last IPCC assessment in 2014.

In recent years, Australia has created a government agency for recovery and resilience, a disaster risk reduction framework, and national adaptation guidance.

States and territories have introduced climate adaptation strategies, with some evidence of implementation. Local governments, regions, communities and associated alliances are becoming more active in adaptation. In the private sector, there is some rapid work underway to address climate risk and disclosure.

Laudable though this progress is, we found that progress on adaptation is distinctly uneven. That’s due to implementation barriers as well as limits to adaptive capacity. Barriers we found include competing objectives, divergent risk perceptions and values, knowledge constraints, inconsistent information, fear of litigation, up-front costs, and lack of engagement, trust and resources.

If we are to get better at adaptation, we have to shift from reactive to anticipatory planning, to better plan for and reduce climate-related risks. Systemic risks demand systemic adaptation.

We found there was a great deal to be gained from better integration and coordination between levels of government and sectors through more effective policy alignment and more inclusive and collaborative institutional arrangements.

Australia would benefit from a national risk assessment and a national climate adaptation implementation plan. Other ways to enable more effective adaptation include serious and stable funding and finance mechanisms, and nationally consistent and accessible information and decision-support tools.

The way we go about adaptation is also important. Climate planning that promotes inclusive governance, collective action and mutual support can make the process of change easier, fairer and more effective.

The best time to act is now

If we delay introducing effective adaptation methods and significant global emission reduction, the damage caused will be more expensive and require far greater change. We need robust, timely adaptation, and deep cuts to emissions. That’s to have our best chance of keeping global warming to 1.5-2℃ and reduce the challenges of adaptation.

Although the climate impacts and risks we face are increasingly severe, it is by no means too late to avert the worst outcomes.It is still possible to move to a pathway of “climate resilient development” in which we work together to rapidly contain global warming, adapt effectively and help secure a better future for all.

This article was first published in The Conversation on 28 February 2022 under a Creative Commons.