This is part of a new series looking at the national security challenges facing Australia, how our leaders are responding to them through legislation and how this is impacting society. Read other stories in the series here.

In late September, Home Affairs Minister Peter Dutton introduced a new bill that would give him stronger powers to strip the Australian citizenship of dual nationals convicted of terror-related offences or who in engage in related activities.

In response to the prospect of foreign fighters returning from conflicts overseas, the bill proposes extending the current citizenship revocation law to any dual national who is convicted of a terrorism offence carrying at least three years imprisonment (compared to the current six).

It would also be back-dated to account for any terrorism convictions or conduct from May 2003 onwards (compared to the current cut-off date of December 2015).

To protect the rights of dual nationals, the bill proposes changing the process for revoking citizenship. Instead of it automatically ceasing when people engage in terror-related conduct, the minister would have the sole power to decide if they should be stripped of their citizenship.

This procedural change is unusual because moves to repeal or wind back anti-terrorism laws have been few and far between.

Unfortunately, however, in all other respects, the new citizenship bill fits squarely within the pattern of overzealous Australian anti-terror law-making over the past 18 years.

Since the September 11, 2001, terrorist attacks in the United States, the Australian parliament has responded to the threat of terrorism here and overseas by enacting dozens of new laws or amending existing laws. 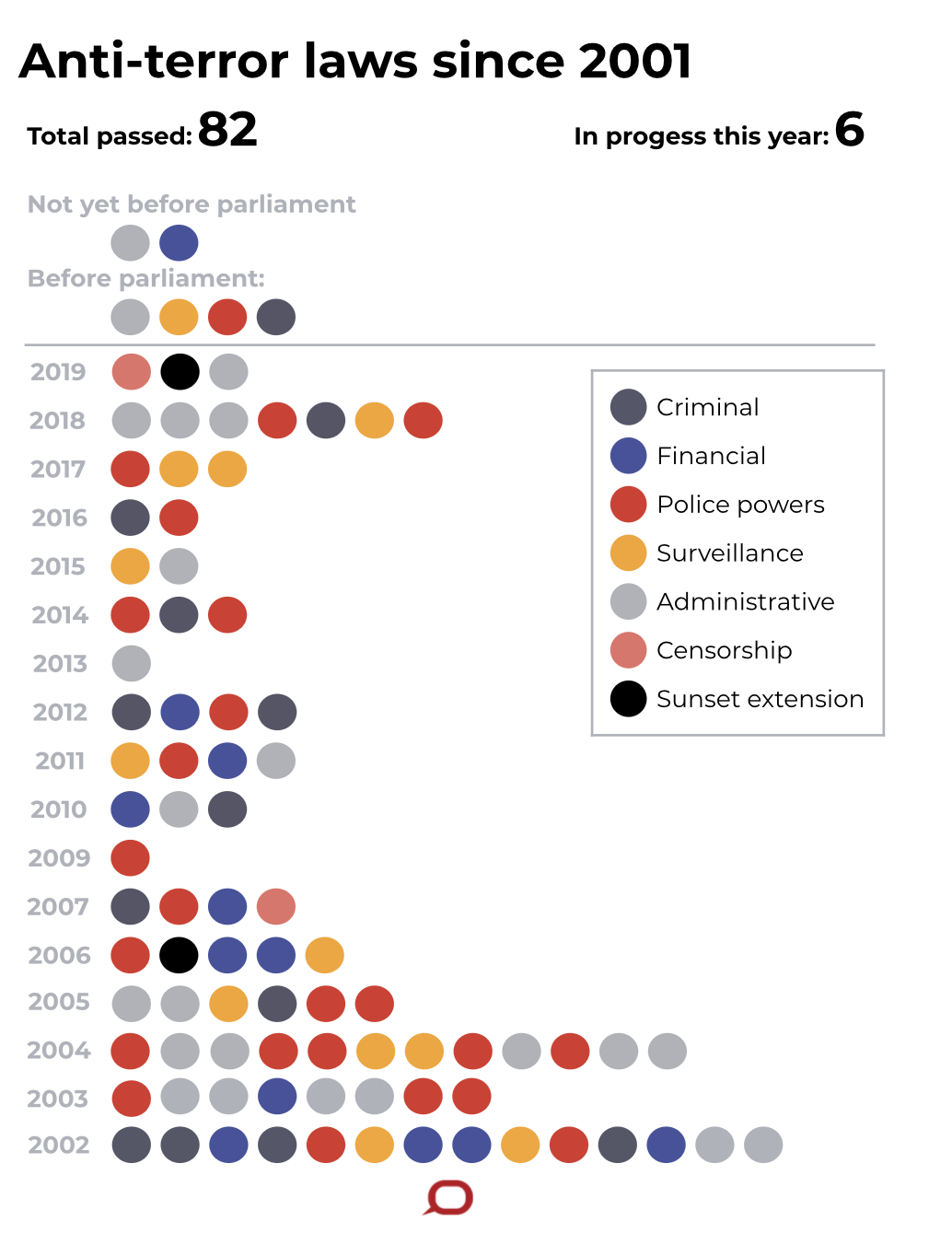 In 2011, University of Toronto Professor Kent Roach famously described this response in Australia as one of “hyper-legislation”.

Another expert, UNSW Professor George Williams calculated that between the September 11 terrorist attacks and the defeat of the Howard government in November 2007, a new anti-terror law was enacted on average every 6.7 weeks.

The declaration of a caliphate by the Islamic State in mid-2014 led to another flurry of legislative activity in parliament.

This started with the National Security Legislation Amendment Act (No 1) 2014 (Cth), which controversially exempted undercover ASIO officers from criminal prosecution, expanded that organisation’s access to computer networks, and restricted the leaking of sensitive information.

This is a staggering number of laws, and far exceeds the volume in the United Kingdom, Canada and even the United States in response to Sept 11.

It is not only the sheer number of laws, but also their scope, which makes Australia stand out among Western democracies.

At the core of Australia’s anti-terrorism regime is a carefully considered and, in the eyes of most commentators, balanced definition of terrorism.

However, as the years have gone by, increasingly draconian, and often unworkable, legislation has spiralled out beyond this definition. For instance, the mere act of travel to certain areas, such as Mosul in Iraq, has been criminalised, as well as advocating terrorism.

Instead of working with companies like Facebook and Twitter in the aftermath of the Christchurch terrorist attacks, the government imposed impractical obligations on them to scrutinise the online activities of their customers (with further laws threatened in the event of non-compliance).

In addition to the stripping of the citizenship of dual nationals, another bill would prevent anyone from returning home from overseas conflicts for a considerable period of time under a Temporary Exclusion Order, even Australians who don’t hold another passport.

Another bill before parliament would require people who have previously been charged with a terrorism offence (regardless of whether they were ultimately acquitted) to prove extraordinary circumstances before being granted bail for a subsequent offence.

This demonstrates just how far lawmakers have strayed from the fundamental human rights and principles of criminal justice.

What anti-terror laws are intended to do

In the immediate aftermath of the September 11 attacks, Australian lawmakers might have been excused any overreaction on the grounds the country didn’t have much historical experience with terrorism or in legislating in response to this threat.

At the time, there were no specific anti-terrorism laws at the federal level in Australia. This was undoubtedly a significant oversight which needed to be remedied.

Even today, more than 18 years on and with over 80 laws in place, it’s somewhat understandable lawmakers react to terrorist attacks by seeking to take swift action.

One of the (few) downsides of a democratic political system is that parliamentarians are hit with the full force of public hysteria about actual and perceived terrorist threats. The most obvious way for the parliament to address these fears is through the enactment of laws.

As Roger Wilkins, a former secretary of the Attorney-General’s department, said in support of proposals to strengthen the control orders laws in the aftermath of the November 2015 Paris terrorist attacks:

In a modern, liberal democracy, that’s about the only thing you can do.

Despite frequent claims to the contrary, this is not just a case of political opportunism on the part of the governing party. The steps taken by lawmakers are crucial in re-establishing the community’s sense of security.

We need to acknowledge, above all, that the buck stops with our elected representatives to protect the lives of the Australian people. They bear both the personal and professional responsibility if a terrorist act occurs which could have been prevented.

It is this, as much as anything else, that explains the rapid and bipartisan passage of so many laws through the parliament.

Having said all this, it’s unfortunate successive Australian governments on both sides seem to have learned little over the course of the last 18 years.

Statements made in the aftermath of every terrorist attack, and, most recently in responding to concerns about foreign terrorist fighters, have identified the ultimate goal as being to “defy” and “defeat” terrorism.

While statements such as this are clearly rhetorical, what underpins them is a failure to recognise the permanence of terrorism.

Terrorism in one form or another has always existed, and will always continue to exist. Neither legislation nor anything else will be able to eliminate this threat.

The idea of managing the threat of terrorism, in the sense that some degree of terrorism is acceptable or at least to be expected, might seem politically unpalatable. However, open acceptance of the permanence of terrorism means lawmakers will no longer be chasing – and the public no longer demanding – the achievement of an impossible goal.

It will also, in turn, facilitate a more proportionate response to the challenges posed by the foreign fighters phenomenon and the threat of terrorism more generally.

In a quest to eliminate terrorism, laws have been enacted that make ever-increasing intrusions into people’s lives and curtail human rights for diminishing returns in terms of security.

Some have even suggested these laws make us less safe. In its submissionto the Parliamentary Joint Committee on Intelligence and Security’s inquiry into the citizenship stripping laws, ASIO said these measures could:

have unintended or unforeseen adverse security outcomes – potentially including reducing one manifestation of the terrorist threat while exacerbating another.

It will never be appropriate or desirable for governments to sit back and take no action in response to the threat of terrorism. But what we need is a sharp change in approach.

Countering violent extremism programs have been used in Australia and other countries as another tool for responding to terrorism threats. Instead of treating such programs as a “backup” option, as they currently are in Australia, these should be brought to the fore.

The critical lesson of the past 18 years is that we must think creatively about how to combat the threat of terrorism, rather than continually reworking existing – and often demonstrably unsuccessful – strategies.

This article was published by The Conversation on the 30th of September 2019.