NICOLAS SENÈZE. Rediscovering the role of Mary Magdalene as ‘apostle of the apostles’.

Turning Mary Magdalene into a sinner obstructed women’s place in the church. 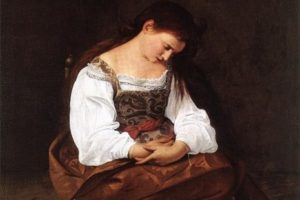 A feminist historian as well as coordinator to L’Osservatore Romano women’s supplement, Lucetta Scaraffia specializes in the relationship of women and the church. In this interview with Nicolas Senèze for La Croix, she explains how the church progressively erased the role of the apostle Mary Magdalene, transforming her into a repentant sinner.

La Croix: In your view as someone who has closely studied the relationship between women and the Church, is Mary Magdalene more a sinner or an apostle?

Lucetta Scaraffia: I would like to begin by recalling a personal experience. When I was a young woman in Milan following the events of May 1968, many women in Italian feminist circles began to name their daughters Magdalene.

This was meant to be in contrast to the name Mary. The idea was to contrast the figure of an obedient woman with that of a free, yet sinful woman.

That was when I also began to take an interest in Mary Magdalene, who I think has been one of the most manipulated persons in history — both by the church and by feminists.

Why, in your view, is there this double view of Mary Magdalene?

Mary Magdalene is a powerful figure from the beginning of Christianity. However, in a patriarchal society the fact that the risen Jesus appeared first of all to a woman, giving her the mission of announcing the Resurrection to the Apostles – the highest mission possible! – was a problem for the men of that time.

This is illustrated in a variety of ways. Gnosticism, the first Christian heresy, for example, took a great interest in Mary Magdalene.

The Gnostics believed that Christ had transmitted a secret teaching to her, which was recorded in the Pistis Sophia.

Magdalene even became an apostle in her own right who went as far as opposing Peter to the extent of defeating him after becoming a man or rather a kind of androgynous being.

How did the image of Mary Magdalene as a sinner emerge?

People began to assimilate the person of Mary Magdalene with two other Marys in the Gospel, namely the sister of Martha (Lk 10:38-41) and the prostitute who washed Jesus’ feet with her tears (Lk 7:36-50).

She was thus almost a family figure, which makes her closeness to Jesus less dangerous and less troubling.

As for Mary, the prostitute, it was easy to throw a veil of suspicion over her and thus make Mary Magdalene seem a lesser person in comparison.

Moreover, it should be noted that the traditions of the East and West are different here. The Christian East celebrates the feasts of Mary of Bethany and Mary of Magdala separately whereas from the fourth century the West began to conflate them with the prostitute.

This transformed Mary Magdalene into a woman who had repented and wept over her sins. Hence, she was no longer the missionary whose task was to announce the news of the Resurrection.

Why did this occur?

Highlighting the image of the repentant sinner allowed people to conceal Jesus’ attachment to the women he deeply loved.

Even with an “irregular” life, they are very significant figures throughout the Gospels.

Jesus observes that women love more than men, that they understand love better than men.

Thus, it was to the Samaritan woman that he first announced that he was the Messiah (Jn 4:26).

Even if she had had a disordered life – the Gospel says that she had had five husbands “and the one you have now is not your husband,” Jesus told her – she was a woman who was looking for love and for Jesus that was what was most important.

To say that Mary Magdalene was a prostitute was therefore a way of putting her down.

However, Jesus’ was clearly close to these women seeking love, whom he deeply loved. The role Jesus gave them is often effaced in the Gospel since it was not understood at the time.

Moreover, it cannot be excluded that Jesus had relationships with other women which are not detailed in the Gospels. However, it is truly impossible to hide Mary Magdalene since she was so central to Jesus’ life.

Hence, turning her into a sinner allowed her role as an apostle to be effaced for 2,000 years and thus obstructed recognition of women’s place in the church.

How has the person of Mary Magdalene as an apostle returned to the forefront?

In recent years, many women exegetes have reread the Gospels and started to protest. Their work has allowed us to better understand Jesus’ relations with women, to understand the various aspects of the personality of Mary Magdalene and to rediscover her role as an apostle.

In other words, to re-establish the truth.

However, this is also true of (Jesus’ mother) Mary. We have turned her into an example of obedience and humility that every woman needs to follow. However, she is primarily an example of courage!

She accepted to become pregnant even before she was married despite understanding the danger that she could have been stoned. That took incredible courage.

However, for centuries, no one noticed this.

On June 16, 2017, the Vatican raised the liturgical memorial of St. Mary Magdalene to the rank of liturgical feast and published a new preface for her, characterizing her as “the apostle of the apostles.” What is the significance of this decision?

This is a genuine decision by Pope Francis. The fact that he has given Mary Magdalene the title of “apostle of the apostles” is absolutely fundamental!

In my opinion, placing Mary Magdalene on the same rank as the apostles is even more important than ordaining women priests because it gives women an equality that is even more profound in the field of evangelization.

I think that it is a liturgical and theological decision that is irreversible and provides a basis for achieving every kind of equality.

This article was first published on La Croix International. on March 29 2018