No need for buyer’s remorse: realism key to Australia’s engagement with China

Australia, unlike the US, never expected China to become like us. That’s why the relationship continues to be an outstanding investment in our prosperity and security.
Among the many things China is accused of today is that it did not live up to its side of an implicit bargain with the West to become a liberal democracy and a fully paid up member of the US-led international order in return for the West’s welcoming China into the international system after decades of isolation, obscurity and stagnation.

This is the prevailing view in Washington these days on both sides of the aisle, among Republicans and Democrats alike. Perhaps more disingenuously and opportunistically, this view holds sway these days in Canberra as well. 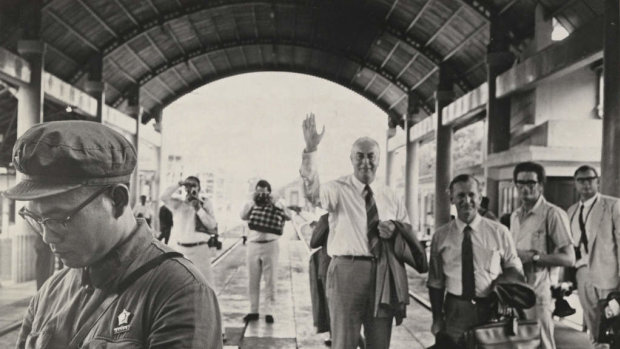 Gough Whitlam visited China in 1971. Australian politicians and diplomats did not carry ideological baggage into the relationship like their US counterparts.

US politicians unreservedly embrace the notion of US exceptionalism and accordingly a belief that the US has a moral duty to make and remake the world in its own image. No doubt, confidence in that has been shaken in some quarters as the US increasingly adopts many of the advanced characteristics of a failed state.

A revisionist history now argues that the past 40 years of engagement with China was a failure. China has developed economically beyond anyone’s expectations when Deng Xiaoping’s reforms began in 1979, although in per capita terms it is still a relatively poor country. Rather than converging towards the norms of political and social organisation prevalent in the West, China has remained an authoritarian state that stands far apart from Western norms. Moreover, its growing wealth, military and technological might have made it a threat to the international order.

Beyond having the second-largest economy in the world today in nominal dollar terms and the largest in purchasing power parity terms, China has become the dominant power in east Asia, something Canberra has trouble recognising. It has expanded and modernised its military as its economy has grown, to a point where it can defend its coastal waters, including Taiwan, from US incursion. It has established effective control over several reefs and islets in the South China Sea, albeit of doubtful legality, and is a serial abuser of human rights, particularly in its border areas of Xinjiang and Tibet.

All of these behaviours reinforce the view that it was a profound historical error to have engaged rather than to have contained China. US Secretary of State Mike Pompeo has articulated a doctrine of not just containing China but of diminishing its present standing.

Australia was among the first in the OECD to recognise the profound potential of China’s early reforms to transform the country economically, creating enormous opportunity for Australia as a result. Australian politicians and diplomats did not carry ideological baggage into the relationship like their US counterparts. The Australians had a pragmatic and realist set of objectives for engaging China.

First was to encourage China to open its markets to foreign trade and investment, which would create economic opportunities for Australia. (At the time this was happening in the 1980s, no one had any sense of the scale this would eventually take and the huge contribution China would make to raising Australian living standards.)

Each of the objectives of Australian policymakers … have been achieved and well beyond what might reasonably have been expected in the 1980s.

As part of this, China was to be encouraged and assisted in moving from centrally planned allocation of resources to more market allocation so as to increase efficiency and hence economic growth. The faster China could grow, the greater the potential economic benefit for Australia would be, provided Australia itself would undertake the necessary reforms needed to make itself an efficient and hence competitive supplier to the Chinese market. In this way, Australia’s engagement with China also helped to push necessary policy reforms in Australia, again to the benefit of Australia’s living standards. Note the prevalence of self-interest over ideology.

Second, it was understood that a more prosperous China would become a more stable and settled China politically. When the West’s engagement with China began in the 1980s, China had endured more than a century of turbulence and instability during the fading Qing Empire, nationalist government, Japanese occupation and communist chaos lasting until 1976. Much of this was within living memory of people within and outside China.

A more prosperous and settled China would also be less of a threat to stability along the 22,000 kilometres of land borders it shares with 14 other countries. Apart from three highly contained clashes with India since the Sino-Indian border war of 1962, the last military conflict occurred in 1979 when China invaded Vietnam, only to retreat after a few months. By and large, China’s borders have been peaceful for more than 40 years.

Third, an unstable, crisis-ridden China would have seen a huge outflow of refugees into the region. By the 1980s, large refugee movements in the region were still of major policy concern. Across the region, countries hosted camps of refugees from the Indo-China conflicts. Australia had been a major and generous destination. Mass refugee outflows from China could have destabilised the region and harmed security for many countries. Fortunately, this never happened but remains an ever-present risk were China to experience economic, political and social collapse.

Viewed from today, each of the objectives of Australian policymakers – free of ideological blinkers – when they decided to engage China, have been achieved and well beyond what might reasonably have been expected in the 1980s.

Far from buyer’s remorse, it has proved to be an outstandingly successful investment for Australia. China’s becoming like us was never part of the bargain. That China would contribute substantially to Australia’s prosperity and security was, and that is still the case today.

First published in the AFR.