Not a voice but a shout Many have argued that our civilisation may collapse before the end of this century. In contrast Aboriginal people have survived in this country for at least 50,000 years.

In the latter half of 2023, Australians will be required to vote on ‘an indigenous voice to parliament’. It’s intended this will provide indigenous Australians a direct input to the parliament on issues that parliament believes particularly concern them, a significant step forward which should be supported. Such issues will be referred by the parliament or government to a body of aboriginal representatives selected by aboriginal people themselves from across Australia. On the surface this would seem eminently reasonable and within the prevailing bounds of existing democratic practice but as this paper argues the prevailing economic and political paradigm has no future.

The present proposal does not go far enough:

Non-indigenous Australian life and pursuit is built around ‘the economy’ and that economy is based on the pursuit of growth. GDP growth of 1% is alright, 3% has every economist, politician, economic commentator and journalist shouting that Australia is doing very well and is ‘out-performing’ most other countries. If GDP falls by 1 or 2% the same spokespeople will wring their hands and provide advice on correcting this disastrous situation to return Australia to growth. Every aspect of Australia’s management mut be directed toward more growth.

But there are other voices in Australia and around the world: scientists and a few heterodox economists who warn that the growth path is unsustainable and headed for collapse. They remain unacknowledged by Australian politicians and most mainstream Australian journalists.

And here is the link with ‘the voice’ or ‘the shout’.

There is abundant evidence that the ‘growth forever’ belief system permeating every aspect of the mainstream view of the future is unsustainable and cannot but unravel in coming decades. Climate change gets a lot of attention but is only one of many inextricably intertwined indicators of our unsustainable trajectory. Equally important is galloping loss of biodiversity, declining fresh water supplies, declining fish stocks and the running down of mineral resources accompanied by rising energy costs as we chase ever lower grade ores. All these matters require simultaneous action guided by a different world view.

Very many have argued that for these reasons our civilisation may collapse well before the end of this century. In contrast Aboriginal people have survived in this country for at least 50,000 years. If Australia had avoided colonisation it’s more than likely Aboriginal people would still be here 50,000 years from now. What is it in that culture that ensures its survival? What may we learn from our indigenous cousins?

Rather than continue the destruction of Aboriginal culture should we not consciously and deliberately recognise the superior value of the attitude within this culture toward Nature and a sustainable future and so build a new culture which embraces both?

I am not espousing a view based on ‘the noble savage’. I am not suggesting that we live in caves. There is much good that science and ‘the enlightenment’ have added to quality of life. But growth economics and its equation between quality of life and ever-increasing consumption of Nature is not a plus. It is a minus that destroys as it grows.

Australians have already exceeded Nature’s ability to sustainably provide for our manufactured wants. The ‘environmental footprint’ of the average Australian is so large that if the whole world were to consume Nature as we do, humanity would need four Earths to sustainably fulfil those wants. As the mainstream economic paradigm seeks even more growth it is clearly announcing to the majority of the world’s poor that we believe it is our right to take an unsustainable and unfair share of Earth’s dwindling resources.

If we really do care about both the existing poor and our soon-to-be poor descendants, then we must reduce our material demands to about a quarter of our present per capita consumption. Much has been written by many authors about what are essential needs and what are non-essential and largely artificially created wants. I don’t intend to recount their work here. It is worth noting however that approximately half the world’s population lives on less than this amount.

The socioeconomic, growth-oriented zeitgeist which permeates every aspect of mainstream Australian culture has brought us to a point at which approximately half Earth’s mammals have become extinct in the last 50 years and the rate of extinction is increasing. Of all mammals on Earth 96% are humans and our supporting livestock; only 4% are wild animals.

Emissions of climate changing gases continue to climb causing Professor James Hansen, one of the initiators of global knowledge of climate change in 1988, to remark, ‘all we’ve done is agree there is a problem’. On its present trajectory it’s thought that global temperatures could be 3 – 4⁰C higher by century’s end, threatening all life on Earth including our own.

In contrast is a view that we humans are a part of all life; Nature and other life forms have an innate right to exist and flourish quite separate from us. We are part of the land, and the land is part of us (land is Nature). It is not something to be owned like a commercial good, to be traded for a ‘higher value’, dollars.

Rejecting the growth paradigm, building a new culture which integrates both the understanding of Nature which comes through science and the deep conviction that Nature and non-human life have their own abiding rights and values incorporates the elements vital for a viable, sustainable future for all Australians. Acknowledging that an essential contribution to this new culture comes through our indigenous brothers and sisters who have lived it for 50,000 + years is far more essential than simply allowing consultation within a soon-to-be collapsing society built on unsustainable growth. 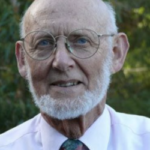 Dr John Coulter, Leader of Australian Democrats 1991-93, has spent his life between science, environment and politics. As an Australian Democrat Senator he held the portfolio of Aboriginal Affairs through which he strongly supported the legislation which
established ATSIC in 1989.