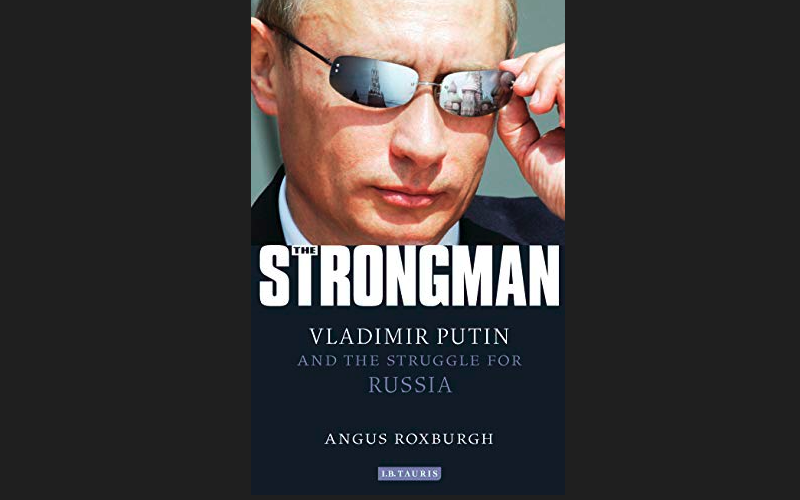 A book about Putin, “The Strongman”, written by British Russian expert and journalist Angus Roxburgh in 2012, is striking to read today, because it feels as if it were written today. (Image: Bloomsbury).

In massing large numbers of troops near the Ukraine Putin may have been aiming to show NATO and the West how Russia—and Putin himself in particular—has felt over the years as the Western alliance and NATO crept ever closer to Russia’s borders.

Despite ever more ominous warnings, especially by the US, there are some signs that Russia will not invade, but in such a tense situation, so full of military equipment and preparations, a conclusion to the crisis without resort to armed force will be a surprising—and very welcome—outcome.

A book about Putin, “The Strongman”, written by British Russian expert and journalist Angus Roxburgh in 2012, is striking to read today, because it feels as if it were written today.  It deals with Putin’s thinking and preoccupations from the time he became President.  The Ukraine, and NATO’s eastward expansion, our current pressing concerns, have been major themes for him from the start, together with the over-riding question of the nature of Russia’s relations with the United States.  There were various stages in each of these issues—-Obama and Hillary Clinton’s attempted “re-set” with Russia, for example—but none of them was settled satisfactorily for Putin.  A particular issue with the US, for example, was arms control and the stationing of American radars and missiles in Eastern Europe allegedly to protect against a missile attack on the US from Iran.  The Russians saw this as a threat to themselves, but despite some at times promising progress no mutually satisfactory solution was reached.

Roxburgh essentially saw the US and Russia talking past each other.  The US did not accept that Russia’s security concerns were real, and that it was as entitled as any other country to want security for its borders.  On the other hand Putin did not understand that what happened in Russia, and how he ran it, affected how other countries saw it and were prepared to deal with it.  If Eastern European countries saw Russia as a repressive and kleptocratic state, as well as their former oppressor, they naturally wanted protection from it, not with it.  That impression still holds today, including for the majority of Ukrainians, and is of course being reinforced by Russia’s current threatening stance.

But returning to Putin’s concerns, if they go back such a long way: why act on them now?  We of course don’t know what has been in his mind.  It certainly seems that he is the key and perhaps the sole decision-maker, although some of his close advisers, like Foreign Minister Lavrov, have been with him for a long time.  Perhaps he simply saw the United States in a divided and unimpressive state, and thought “why not?  Let them see what it feels like to have possibly unfriendly forces on their borders, and have to decide what to do”.

One factor that could have played a part in his thinking was the speed with which American foreign policy and strategic experts rationalised their defeat in Afghanistan by saying that bad as that was it freed the US up to concentrate on the real issue for the future—China.  “Don’t forget our issues”, Putin might have thought.  And if what he wanted was to get the West’s and the US’s attention he certainly succeeded, by the stationing of such a powerful force so adjacent to the Ukraine.  But what will he in the end do with that force?

Obviously there’s the threat of military action of some kind against the Ukraine.  But the reaction of NATO and the West generally, and the US in particular, has been very strong in terms of non-military consequences which Russia would face.  In fact a short time ago Putin seemed to be preparing his public for not using force, reportedly saying in a speech that the West was trying to lure Russia into a war in order subsequently to strangle it with crippling economic sanctions.  But according to press reports subsequent talks with various European interlocutors have not yielded particularly positive or concrete results, and reports from American sources in particular, including Secretary Blinken himself, talk repeatedly of an imminent invasion.  (In contrast to that, the British Defence Minister, visiting Moscow, was reportedly assured by his Russian opposite number a day or two ago that Russia had no intention of attacking.)

Putin may decide that he’s succeeded in one objective, getting the world’s attention, and has made his points that Russia’s concerns are not to be taken lightly, and that security for its borders is one of those concerns.  The US has apparently put forward some propositions designed to address those issues, in terms of arms control and mutual restraint in Europe.  The Russian response to them has reportedly been lukewarm so far, and indeed having assembled such a formidable force Putin must be tempted to use it.  We can only hope that he doesn’t.