Nuclear disarmament is not going to happen: the case for signing the Nuclear Weapons Prohibition Treaty

The 2017 Treaty on the Prohibition of Nuclear Weapons enters into force today. Australia’s failure to sign the treaty is at odds not only with its international humanitarian obligations but also with its most basic strategic interests.

The Coalition government believes the treaty to be impractical in the absence of nuclear weapon state support and possibly prejudicial to the integrity of the existing nuclear non-proliferation and disarmament framework. It also thinks it incompatible with Australia’s military alliance with the United States.

That the use of these weapons would constitute a gross violation of the rules of war carries little weight with those who argue that “the national interest” carries all before it. But where does Australia’s national interest really lie in relation to nuclear weapons — with the states that possess such weapons or with the abolitionists?

The NPT, driven by the five recognised nuclear weapon states — Britain, China, France, Russia and the US, has consistently devoted more time and effort to the cause of nuclear non-proliferation than it has to disarmament.

The treaty, though, requires nuclear weapons states “to pursue negotiations in good faith on effective measures relating to . . . nuclear disarmament”. They have not done this. As a disarmament treaty, the NPT has been an abject failure — not least because the United Nations’ only dedicated multilateral disarmament forum, the Conference on Disarmament, which did not produce the TPNW, has been essentially moribund since the adoption of the Comprehensive Nuclear-Test-Ban Treaty (CTBT) in 1996.

As such, any threat to the existing nuclear non-proliferation and disarmament framework comes from the failure of the now 50-year-old NPT to drive nuclear disarmament under Article VI.

The nuclear weapons states assure us that multilateral nuclear disarmament will happen when the international security environment permits, but — reflecting as it must the mindset that led to the acquisition of these weapons — the chances of this ever being a simultaneously shared perception are non-existent.

A report published in 2015 by the Centre for Nuclear Non-Proliferation and Disarmament at the Australian National University describes the current situation quite nicely:

While nuclear disarmament continues to be very strongly supported by the overwhelming majority of non-nuclear-armed states, it remains for every nuclear-armed state at best an open-ended, incremental process, with broad and indeterminate links to global and regional stability.

There is no appetite for a multilateral nuclear disarmament process and no disposition on the part of the NWS (nuclear weapons states) to discuss nuclear disarmament timelines. All nine nuclear-armed states have long-term nuclear-weapons system modernisation programs under development and in progress. Based on current arsenals, deployments and force postures, and on planned expansions, upgrades and modernisation, every nuclear-armed state is committed to the indefinite retention of significant nuclear-weapon capability.

Is this situation really in Australia’s national interest? Does nuclear deterrence work and are we any safer under a US nuclear umbrella?

Deterrence, if it is to have any credibility, must be joined to a viable multi-lateral nuclear disarmament strategy. Without this, deterrence is bound to fail. The idea that we should have indefinitely at our disposal weapons whose only utility lies in never having to use them stretches human credulity to the breaking point.

Nor can we expect the US to risk nuclear retaliation by threatening to use nuclear weapons on Australia’s behalf against conventional forces, including those of a nuclear-armed state. It is likewise virtually impossible to envisage a situation in which Australia would be subjected to a nuclear strike independently of its alliance relationship. Any such attack must almost inevitably be part of a wider war that already involved the US, when it would  obvious that deterrence had failed and that our association with it had brought us to ruin. The US is extremely vulnerable to nuclear attack and has no capacity to protect Australia from one.

Australia’s national interest lies in the universal abolition of these weapons. The TPNW is a significant step in this direction. Nuclear disarmament depends finally on the good will, however reluctantly conceded, of the nuclear-armed states themselves. In the meantime, non-nuclear weapon states, including Australia, can at least be clear that the failure particularly of the recognised nuclear weapons states to take seriously their disarmament responsibilities is increasingly causing concern in the rest of the world. Their collective rejection of the TPNW will not stop the treaty gathering normative force and shows how reluctant they are to allow the nuclear disarmament debate to morph into less ambiguous forms over which they have far less control.

Other US allies, including New Zealand and Thailand, have joined the treaty, and Australia is already a party to disarmament treaties that the US has declined to join — the 1997 landmines and 2008 cluster munitions conventions are examples. Acceding to the TPNW may present challenges to Australia’s military relationship with the US, particularly with respect to Pine Gap, but if America were unwilling to work with us on revised arrangements consistent with Australia’s TPNW treaty obligations, it would be a poor return indeed on Australia’s enormous investment in this relationship over the past 70 years. 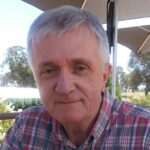 Dr Peter Hooton is a former DFAT Assistant Secretary for Arms Control and Counter-Proliferation and contributor to the first edition of Nuclear Weapons: The State of Play (Canberra: ANU 2013). He now works at the Australian Centre for Christianity and Culture on Charles Sturt University’s Canberra campus.