Oligarchy versus Democracy: choices of power for leaders

North Korea’s Kim Jong-un rules from within an inherited oligarchy; in 2018, the National People’s Congress in China gave Xi Jinping ‘Presidency for life’; the Burmese Generals in Myanmar are brutally clinging to authoritarian rule once again, having supplanted the elected Parliamentary Republic under Aung San Suu Kyi.

And now, Russia’s President Vladimir Putin has just signed a law allowing himself to remain in power till 2036, at least for another two terms. CBS News reported that Putin apparently stated, “we must work, and not look for successors”.

Does anyone in the Kremlin, apart from the opposition leader Alexi Novalny – now on a hunger strike – recognise the tragic irony in this development? Putin permits no dissent and has manipulated his followers to bestow effective permanency upon himself.

When I did my masters’ degree on power and influence in 1988, the social science at the time (French and Raven 1959) highlighted five bases or sources of power:

Information power was added later by scholars, in that significant information could still be given by someone who was not necessarily a formal expert or who held legitimate authority. Connection power was also added, based upon the perception that a person who has important liaisons or connections can influence others who seek to gain favour with such networks.

Power is the capacity and the potential to exert influence; influence itself is the process of changing another’s behaviour. Power is about mastery, not necessarily about dominance or control.

Power is indeed complex: it is not a possession but an aspect of a relationship, it is not static but an interactive process, and it has two faces, one positive (mastery), one negative (dominance). It could well be about keeping control in positions of authority, which is what oligarchs value most of all.

Another Western political leader comes to mind who displays serious oligarchic tendencies – the 45th President of the USA. What was and still is particularly galling and worrying about Donald Trump and his coterie is the same conviction as among the oligarchs: the expressed desire and actions which foster permanence in their role.

One legal case in Texas in January 2021 shows a lawsuit that presented baseless allegations of election fraud by bizarre references to ‘Gondor has no King’, inferring that legitimately-elected, President Biden was merely a steward and that Trump was the rightful heir to the ‘throne’ of the US Presidency. While the suit explained the reference in a convenient footnote to Tolkein’s book, and to Jackson’s movie trilogy, Lord of the Rings, the judge (rightly) pointed out at the time that the reference was from a work of fiction and fantasy. The suit explained how Gondor’s throne was empty and its rightful king (Aragorn) was in exile, presumably positing the idea that Trump was the true King of America – a land happily monarch-free since 1776.

The judge chastised the legal team for wasting the time of the court, and apparently stated that lawyers who brought such claims, could be disciplined. The main lawyer, Paul Davis, himself a proud Trump supporter, was later fired from his job after recording himself storming the Capitol building earlier that month. So much for supporting an oligarch in a Western democracy.

It seemed to have eluded these legal claimants that the USA is a democracy wherein the people elect their leaders, their leaders are not born to it, nor can they be allowed to readily usurp it under the guise of rightful ascendency.

Trump and such radical-right Republicans seem to believe that they are born to rule – democracy is merely their platform, and their plaything. Thanks to Trump, the world has been well re-educated about the peculiarities and the dark side of US democracy and its voting system. Voter suppression has been highlighted during the Trump Presidency as a vehicle to preserve power, but it has also been shown how Republicans have employed voter suppression in the ‘blue states’ for decades as a vehicle to hold onto power at all costs. Oligarchs don’t like dissent or diversity.

Andrea Brushner’s recent book American Oligarchs: The Kushners, the Trumps, and the Marriage of Money and Power (2020, W.W. Norton) is insightful and sobering. She concludes that these families are oligarchs, wealthy business people with political influence who ignore and disrespect representative Government and its institutions. We all witnessed how Trump strutted the world stage as a quasi-Emperor and appointed his (unelected) daughter, Ivanka, to attend various G8 meetings as his ‘Princess’.

While the US Senate didn’t have the will to vote against Trump for inciting rebellion against the transfer of power at the Capitol building in January 2021, world democratic opinion expressed otherwise. Even the Republican Senator Mitch McConnell excoriated Trump for “a disgraceful dereliction of duty” and that “President Trump is still liable for everything he did while he was in office as an ordinary citizen. [He] didn’t get away with anything, yet”. Trump behaved as an oligarch – desperate to hold onto the US Presidency.

Were the Kennedy and Bush families also oligarchs? History has testified to their enduring influence within American politics, but such influence seems driven more by an inherited sense of public service more than an inherited thirst for enduring power. At least these families recognised that they were answerable to the US constitution, to the law, and to the voting public, not just to their loyal party ‘fans’. One wonders about the dynasties of the Packer’s and the Murdoch’s in Australia …

What Vladimir Putin, Kim Jung-un, Xi Jingpin, the Myanmar Generals, and Donald Trump treasure is their grasp on leadership as a right, or as a personal possession. Rather, the best leaders serve others and the common good, not their own political ambitions, or their own longevity as leaders. Instead, the scholarship on leadership bears rich testimony to the benefits of being there ‘for others’ not ‘for myself’.

Robert Greenleaf in Servant Leadership: A Journey into the Nature of Legitimate Power and Greatness (2002, Paulist Press) highlights four principles of servant leadership:

These principles do not seem to be evident in the minds or the behaviour of political oligarchs. In oligarchic regimes, diversity is actively discouraged; there is mistrust in institutions and leadership itself; self-interest is the prime goal; leadership is a personal possession and not to be distributed or shared.

What is instructive is the diminishing authority of democracies around the world, and that younger people seem increasingly indifferent to preserving it. They may have ignored or forgotten the lessons from their grandparents about how precious and fragile democratic freedom really is.

Indifference is the seedbed for oligarchy to germinate. Aristotle reminded us that nature might abhor a vacuum, and so do oligarchs. 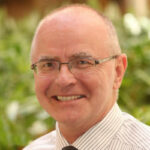 Greg Latemore was ordained as a Catholic priest in 1975 for the Archdiocese of Brisbane and left active ministry in 1980. He was laicised in 1990. He is now married, lectures part-time at Australian Universities, and was awarded a PhD in human resource management in 2020. He has contributed previous articles on leadership during Pearls and Irritations.