Look over there, mate. Should we really ignore a rape allegation against the first law officer of the nation because Labor also has skeletons in its closet?

There was some truly Orwellian media manipulation this week.

Nine’s Chris Uhlmann appeared to be in cahoots with the Prime Minister, as sleuthed by Twitter-commentator RonniSalt and reported by Paul Karp from The Guardian.

In an article published at 9:19am on Wednesday morning, Rachael Dexter reported an answer to a question that was asked of Prime Minister Scott Morrison in his press conference. The twist? The question wasn’t asked, and the answer not given, until just before 10am. 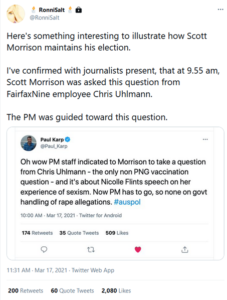 As the government’s IR bill headed to a vote in the Senate on Thursday, the fear was palpable that it would not pass.

While previously the media had focused on defending the IR changes as modest, The Australian Financial Review and The Australian dialled up the rhetoric to 11 through the week, instilling concerns of “major job losses” and perpetrating the myth that casuals who receive entitlements would be double-dipping given their “25% loading” – a loading that has been extensively shown to be a fantasy.

Oh, and they kept flogging the dead horse that the changes were “mild” or “modest”. 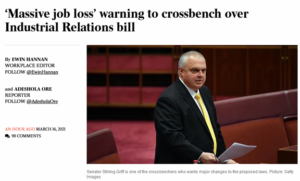 Who would have thought engaging high-powered lawyers and planning and implementing a case of defamation could be such a healing experience.

As has also been noted, the defamation action may ease pressure on Scott Morrison to hold an independent inquiry to determine whether Porter is a fit and proper person for his position. In other word, no inquiries until the action has been heard.

The media also come out all-guns blazing as the trial-by-media of the alleged victim entered its third week, even as Peter van Onselen at The Australian bemoaned the lack of justice and the horrors of trial by media.

Despite being old, old friends with Porter – a friendship he did not disclose –  van Onselen continued defending the Attorney-General, and saw fit to publish the words of the alleged victim, even though he didn’t “want to add to their (the family’s) grief”.

And he was only too happy to join reporter Sharri Markson in trying to cast doubt on the nature of the relationship between the alleged victim and her friends who have been supporting her.

And again, of course, it was Porter who was the victim.

Sharri Markson in The Australian

Elsewhere, Andrew Bolt at The Herald Sun did what Andrew Bolt does, and put to the side all notions of balance in the pursuit of outrage and clicks, blaring that the alleged victim should not be believed. 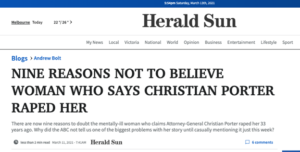 And he joined Dennis Shanahan at The Australian in blatant what-about-ism.

Should we really ignore a rape allegation against our first law officer because there are also reports of sexual harassment in the Labor caucus?