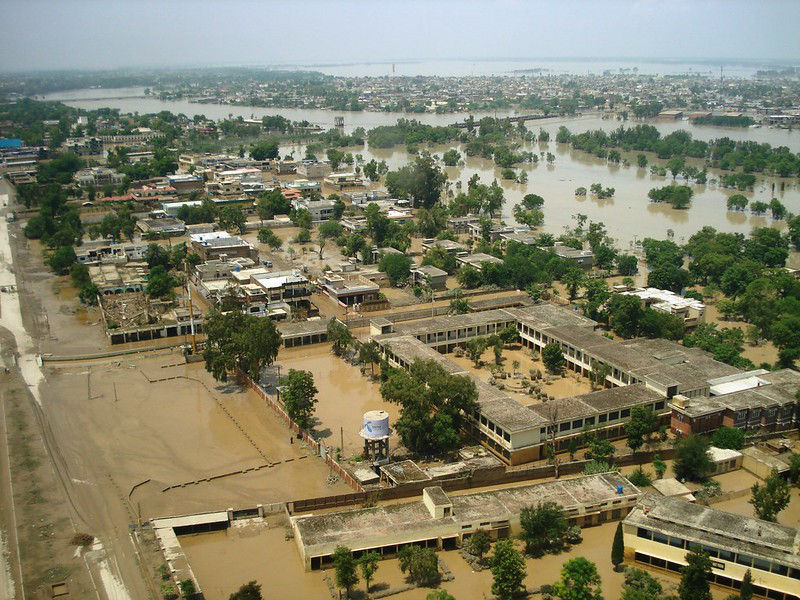 Too often, rich countries deny their historical responsibilities, whether it be for colonialism, slavery, or today’s mounting climate damage. But the developing world will not forget the leading role that industrialised economies have played in permanently altering the climate and making catastrophic events more likely.

Around the world, 2022 has been a year of climate catastrophes, including droughts, floods, mega-fires, typhoons, and more. Among the hardest-hit countries is Pakistan. With torrential monsoon rainfall almost 190% above its 30-year average, extraordinary flooding has submerged one-third of the country and killed 1,400 people so far. But make no mistake: this is not only a “natural disaster”; rather, it is also the result of malfeasance for which high-income countries must bear major financial responsibility.

Pakistan’s floods can be clearly linked to human-induced climate change. Because warmer air holds more moisture, higher temperatures generally mean heavier monsoons. While monsoons have a natural year-to-year variation (being strong in some years and weak in others), the probability distribution is shifting toward heavier rainfall. The melting of Himalayan glaciers due to rising temperatures may also be contributing to increased flooding, and the same is likely true of land-use changes, including deforestation and poorly designed infrastructure.

The costs of the Pakistan floods will be enormous. Early estimates put the damage at more than $30 billion, and the coming months will bring increased hunger, disease, poverty, and massive rebuilding costs, now that more than one million homes have been damaged or destroyed.

Scientists will likely come up with careful estimates of attribution for Pakistan’s floods in the months ahead (examples of previous attribution studies can be found at worldweatherattribution.org). Suppose, hypothetically, that half of Pakistan’s losses are ultimately attributed to long-term climate change, and the other half to random year-to-year variation and local land-use practices. That would mean that around $15 billion of the estimated losses resulted from climate change.

The question then would turn to allocating responsibility for these climate-attributable costs. Under current global arrangements, the financial responsibility falls almost totally on Pakistan. To be sure, the United States has pledged around $50 million in relief, Canada has committed $5 million, and other countries are likely to join in. But even if total relief to Pakistan reached $150 million, that would cover 1% of the attributable losses in this scenario.

Now, consider an alternative way of assigning responsibility, based on countries’ respective contributions to climate change. This is how liability in the US and other countries generally works. If your neighbour damages your property through reckless behaviour, you can sue for damages (compensation); and if a nearby factory pollutes an entire community, that community can sue as a group (through a class-action lawsuit, in the case of the US).

The world’s rich countries are like that polluting factory. They have deprived Pakistan of the long-term climatic conditions on which it has built its economy, homes, farms, and infrastructure. If there was a global climate court, Pakistan’s government would have a strong case against the US and other high-income countries for failing to limit climate-changing greenhouse-gas emissions (GHGs). But since there is no global climate court (yet), governments should act like one and allocate the attributable climate losses and damages to those countries that are historically responsible for them. Pakistan (and its neighbours in the Himalayas) would of course have the core responsibility for sustainable management of the land, including reforestation and climate-safe infrastructure.

The biggest single source of human-induced climate change is the atmospheric concentration of carbon dioxide emissions resulting from the combustion of fossil fuels (coal, oil, and natural gas). Because some CO2 molecules emitted into the atmosphere remain there for centuries, focusing on cumulative emissions over long periods of time is crucial.

Between 1850 and 2020, the burning of fossil fuels resulted in cumulative emissions of 1.69 trillion tons of CO2. Of that total, the US accounts for roughly 24.6% – 417 billion tons – which is much greater than its share of the 2021 world population: roughly 4.2%. Similarly, high-income countries combined (including the US, Europe, Japan, and a few others) account for around 58.7% of cumulative CO2 emissions, but only 15% of today’s world population.

By contrast, Pakistan contributed roughly 5.2 billion tons of CO2 between 1850 and 2020 – roughly what the US emits each year. Its share of historical responsibility is therefore around 0.3% – far below its share of the global population (2.9%) and its burden of climate-related damage. While the US and other high-income countries are “net exporters of climate damages,” Pakistan and most other low-income and lower-middle-income countries are unwilling net importers.

True, there is some debate over what dates to use when assessing historical responsibilities. According to one view, cumulative emissions should be counted from around 1850, because that is when worldwide fossil-fuel use surged with early US and European industrialisation. But another camp would start the clock much later, such as in 1992, when the world’s governments adopted the United Nations Framework Convention on Climate Change and committed to stabilising atmospheric GHG concentrations “at a level that would prevent dangerous anthropogenic (human induced) interference with the climate system.”

But this debate hardly affects the apportionment of responsibility. Even if we measure cumulative emissions just from the 1992-2020 period, the US share is 19.6%, the high-income group’s share is 46.9%, and Pakistan’s share is 0.4%.

Either way, rich countries should bear their fair share of the attributable costs of climate adaptation, emergency response, and recovery in countries that played little to no role in causing today’s calamities. As climate damages increase, so, too, does the need for large-scale, costly investments (including massive reforestation, flood control infrastructure, freshwater storage, and others) to protect societies against floods, droughts, wildfires, high-intensity typhoons, and other climate-related disasters. Climate-related tragedies such as Pakistan’s flooding are occurring with increasing frequency and intensity worldwide, in rich and poor countries alike. The current disasters are just a preview of what awaits us in the coming years and decades.

Too often, rich and powerful countries deny their historical responsibilities – whether for colonialism, slavery, or climate damage. All countries are responsible for decarbonising their energy systems and managing their land and ecosystems responsibly and sustainably. Yet the developing world will not forget the leading role that rich countries have played in creating today’s worldwide climate disasters. As climate-related losses rapidly mount, global demands for climate justice will only grow.