Pakistan floods -The wealthy pollute the world and the poor suffer 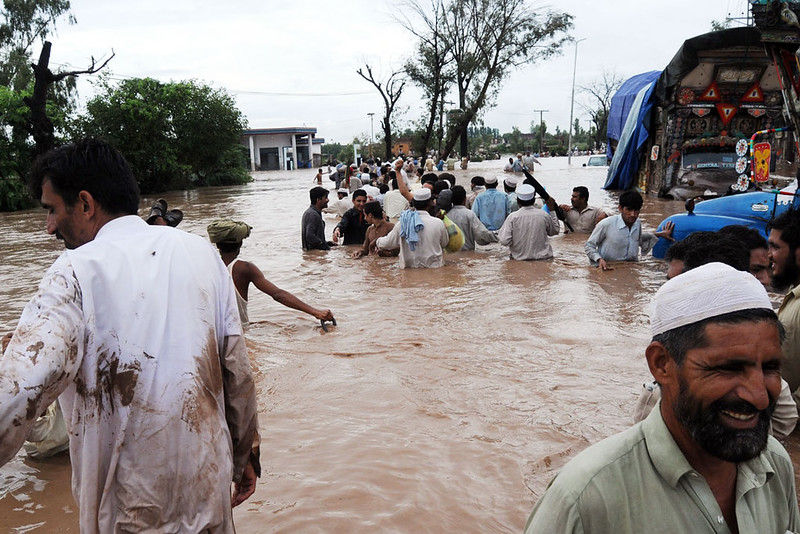 Global capitalism is ‘a giant poverty producing machine, masterful in its methods of pitting the poor against the very poor or flinging crumbs to the wretched so that they dissipate their energy fighting one another.’

The flood catastrophe submerging one third of Pakistan and killing 1100 people, presents a massive challenge to rescue agencies. That’s the immediate goal. Longer term, the conditions faced by Pakistani citizens reveal no guarantee of basic necessities, no freedom to develop viable futures, in effect a persistent human rights crisis.

If the current disaster is seen in those terms, there’s a chance of limiting vulnerability to the next flood, fire or earth quake.

Marshalling resources for people to survive is the priority. The International Rescue Committee (IRC) records that in Pakistan, 3000 kilometres of roads have been destroyed, so too 130 bridges, 495,000 homes, four million acres of crops and 800,000 livestock.

Powerless survivors face wretched conditions. Eighty-seven per cent of women and girls do not have safe latrine facilities, 84% don’t have access to necessary hygiene supplies, and 71% of citizens report that their communities do not have sufficient, clean drinking water.

Relief and rescue agencies will be responding to immediate needs for food, shelter, health care and income, but once the rescue experts have departed, the chronic human rights issue remains: deep-seated poverty and inequality. In which case, a persistent human rights perspective teaches the need to confront pre-existing inequalities in education, gender, health care, disability, social status and power.

Eradicating poverty means reducing global inequalities, each goal running parallel with plans to prepare for and limit the effects of climate induced disasters. Planning for an equitable world should contribute to equitable societies.

Over thirty million citizens of Pakistan have lost almost everything, but even before the scorching heat and floods, it looks as though they had little or no power to influence the quality of their lives. Without the access to resources that comes from wealth, from education and information, resilience to disaster is limited or non-existent.

The question, how to respond to poverty and powerlessness is the global conundrum for anyone wanting to help the people of Pakistan.

An ideology nurtured by capitalist economics and the Protestant ethic has taught that well-being depends on people working hard, saving and thereby enjoying deserved freedoms. The other side of that argument predicts the inevitability of poverty experienced by those who supposedly do not work hard, but if you’ve ever been to poor countries such as Pakistan and India, the industry of people who possess little but their labor, especially women, is mind boggling, unforgettable.

In debates about a fairer distribution of the world’s resources, not just in times of disasters, that dominant capitalist perspective says that to strive for equality would limit individual freedoms. That assumption carries a prescription to continue inequalities and injustice.

The recently identified global apartheid in access to vaccines to protect against the Covid pandemic illustrates another inequality: the vulnerability of the world’s poor to the consequences of climate change, and their being least equipped to protect themselves, a familiar story of haves and have nots.

Arundhati Roy expresses that point more dramatically. Global capitalism, she says, is ‘a giant poverty producing machine, masterful in its methods of pitting the poor against the very poor or flinging crumbs to the wretched so that they dissipate their energy fighting one another.’ Helicopters dropping food parcels over flooded Pakistan confirm the Arundhati thesis: people are struggling to obtain small bounties from the sky.

In response to human rights related questions about accountability for the Pakistan floods, that country’s representatives have no doubt. Whereas Pakistan is responsible for miniscule greenhouse gas emissions, they are punished for the greed and pollution practiced elsewhere. The Guardian UK reports that Pakistan has more glaciers, 7,532 than anywhere on earth outside the polar regions, and is therefore one of the countries must endangered by fossil fuel use, by consequent temperature rise and other extreme weather.

Promoting and supporting human rights to better prepare Pakistani citizens for the next planetary disaster is the humanitarian strategy to convert short term recovery to long term security. That goal requires a global pact to build partnerships, share resources and radically reduce inequality.

That goal will require wealthy, polluting countries to build everyone’s resources and resourcefulness. A pragmatic, even selfish feature of a human rights perspective says we should all act because Pakistan is no island, their floods today will be our disaster tomorrow.