Palestine with Freedom and Equality

I read with interest the letter from Amin Abbas because of the small behind-the-scenes part I have played in what led to this story. I have met Mr Amin and his fellow Olive Kids Director Nasser Mashni along with Ron Finkel, the Founding Director of Project Rozana, the Melbourne-originated and now internationally established Not-For-Profit with similar people-to-people ideals as Olive Kids. It’s all about the kids.  Or so I thought.

Earlier on this year Ron Finkel reached out to Olive Kids and suggested a meeting between the two organisations would be worthwhile. Both were established in Melbourne and both doing great work in Israel and The Palestinian Territories. Again, I mention the kids.

I joined the July meeting, as a Director of Project Rozana for the past 5 years. I had attended the launch of Project Rozana in May 2013 and have been part of the journey ever since. I loved its sense of humanity, which was a path I have always travelled and, beyond Rozana, am still travelling.

I established a Registered NFP, Life Again, in 2013 with the clear goals of helping men through mid-life.

Life Again has reached out over these formative years to men all over Australia through Events, Writing, Speaking and Travel. We work with Individuals and through Companies and Community Organisations. Travel has always been a means of men getting away from urban life and slowing down. Many of our trips over 6 years have been taking men, young and old, to Outback Australia.

This is not a pitch for Life Again. It’s background. The connection between Indigenous and non-Indigenous Australians is a complex conundrum and has years to be resolved.  My Aboriginal friends On Country outside Alice Springs clearly told me that we would never resolve the “Indigenous Problem” in Australia unless “white Australians got to know Black Australians” better. Their words. Life Again registered the words “No Change Without Understanding.” This is the background context to the Amin Abbas letter.

Upon meeting Amin and Nasser (as we were introduced) I immediately felt they were fellow journeymen. Good blokes in my language. They broached the subject of Footy which seemingly starts any Victorian meeting and then we moved on to the subject at hand.

I was comfortable and then noticed the mood changing. Respectfully but obviously; Amin and Nasser generously listened to Ron’s Project Rozana story and then jumped on the front foot. I heard the old language of the Palestinian-Israeli conflagration without any language of resolution. It was hard-arsed. I’ve seen correspondence since our meeting which was almost preparation for Amin’s article. Just gearing up.

I’m no dummy. I’ve been to Israel and The West Bank on a Political Tour 10 years ago and made a further two missions with Rozana in more recent years. I’ve been to the Gaza border crossing and dug deep into the mysteries and miseries of the West Bank. I’ve seen the queues. It’s a small scratching of the surface I know but together with my broad reading I understand the issues. If, of course, they can be understood by watchers on – especially watchers in far off Australia.

The first half of Amin’s article was the telling of horrific and unconscionable treatment of Palestinian kids by Israeli soldiers since 2005. Sadly, we have heard so many of those stories from the region over the years that they shamefully can lose their effect.

In my work with Indigenous peoples one can get swamped with the litany of two centuries of dreadful Whiteman injustices towards our First Peoples. I travelled around a quasi-peaceful Syria in 2009 and then watched from afar as it exploded. saw man’s Inhumanity to man explode.

Amin’s article introduces Project Rozana and asks whether “an international charity can choose to ignore the oppressive occupation under which these (Palestinian) parents and their children live.” Of course, they can’t and don’t. I personally would rather seek man’s Humanity to man. Despite what Amin writes, the work that Project Rozana does IS beyond politics. That’s why I’m involved. That’s why the Jewish Israeli drivers are involved driving the kids and their parents or guardians to hospitals in Israel.

At the Gaza gate I have watched the children meet their drivers early in the morning. Many have done the trip regularly and smile and hug their Jewish friends. I have watched the Palestinian mothers in the waiting rooms of hospitals, including Hadassah in Jerusalem, breaking bread with Israeli mothers and communicating without a common language. They are told by the politicians they are enemy: doesn’t look like it to me. I see health workers at all levels dissociate themselves from the conflict and get on with their jobs.

Amin, and before I finish, you asked whether Rozana could “choose to ignore exploiting Palestinians, when Israeli hospitals charge only Palestinians exuberant costs but not Israelis.” That is totally wrong and must be corrected. Palestinian patients with referrals from the PA for treatment in hospitals in Israel, pay exactly the same for the same treatment.

I have watched as Israelis and Palestinians alike have supported Project Rozana from all parts of the world — financially and emotionally. I have been a Director alongside members including Dr Hass Dellal and Dr Jamal Rifi.

This is a conflict zone of major consequence. Ron Finkel and I put out our hands to Amin Abbas and Nasser Mashni. This is exactly like the work I am doing in Australia to support our First Peoples. I absolutely respect the work that Amin and Nasser are doing in Olive Kids. To think that we are suburbs away in Melbourne and the other side of the world and STILL CAN’T HELP EACH OTHER. Call me naive. But I live in hope and the memories of so many kids who have a chance and perhaps a chance to make a difference.

I’m looking forward to my next meeting with Amin and Nasser. Talking WITH each other, not just about footy, but what we can do together to build bridges to better understanding between Israelis and Palestinians. In Rozana’s case – through health. 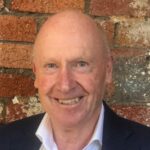