A new environment requires us to produce new names so that we can identify its elements and come to terms with it.  Every settler in a strange terrain goes through the process of naming plants, animals and geographical features.  The social landscape altered by a pandemic required some linguistic landmarks.

To begin with we needed a name for the disease.  Coronavirus, though popular, was not sufficiently specific.  There is an international committee dealing with the taxonomy of viruses but they came to the task slowly. Previous epidemics such as those caused by Ebola and SARS and MERS had resulted in unfortunate stigmatisation of locations associated with the disease. In the end the committee settled on COVID-19 for the disease and severe acute respiratory syndrome coronavirus 2 (SARS-CoV-2) for the virus. In the meantime, in the absence of any official name, people had come up with terms like Chinese disease (Trump’s preferred term), Wuhan flu or Wu Flu.

We learnt to self-isolate and practise social distancing.  The game then was to find ways of connecting with others while maintaining our distance. Some people took to having dinner in the driveway.  Australia introduced the bin outing to the world. For this iso-occasion you dressed up in costume in order to take the garbage bins out, taking photos of the event and posting them online.

In the early days at least we worried about super spreaders, and then super spreader events, such as football matches, that were particularly successful in spreading the virus. We were amazed by the panic buying of toilet rolls and played briefly with the term hamsterkauf, the German word for panic buying.  It breaks down into hamster meaning ‘hoarding’ (from the practice of the hamster animal of stuffing surplus food into pouches in its cheeks), and kauf  to buy.

There was strong support for the word Covidiot which the Urban Dictionary put up on its database with the meanings (a)  Someone who ignores the warnings regarding public health or safety.  (b) A person who hoards goods, denying them from their neighbours.

Many of us were tempted to apply the word to the Minister for Government Services who claimed that hackers had arranged for many people to swamp the Centrelink database. The next day he agreed that in fact the database crash was caused by the lack of preparedness of MyGov for the predictable surge in applications. ‘My bad’ said the minister. ‘Covidiot’ said everyone else.

We longed to flatten the curve. This related to the graph of the spread of the disease, a bell curve rising steeply to a peak if left to its own devices. We wanted to slow the rate of infection and bring that peak down so that it represented patients in numbers that would not overwhelm the health system. There was a touch of black humour in the secondary meaning ‘to stay at home and do nothing’.

We had corona truthers who told us that there was no pandemic, just a plot by the government to take away all our civil liberties.   Conspiracy theorists suggested that (a) the virus had been developed by the Chinese in labs in Wuhan either as a weapon against their own people or the people of Hong Kong or the US  (b) the virus had been developed to wipe out the Democrats  (c) the virus had been developed to bring down Donald Trump.  There were also many suggested cures and preventive measures, but the best was offered by the leader of Belarus who said that the citizens should drink vodka, have saunas, and work hard. There was so much of this fake news and fake analysis that the WHO warned that the infodemic might be as bad as the pandemic.  Infobesity was also on the rise, that is, the obsessive and excessive consumption of news relating to the pandemic.

We entered the world of the travel bubble, a protected area with a low rate of coronavirus infection within which people could travel around freely. The bubble suggested for us was Australia and New Zealand, but then various Pacific countries wanted to bubble in as well.

We were told that the way forward was through economic hibernation.  We put the economy to sleep in a way in which economic relationships, as between employer and employee, were not broken but frozen. The deep sleep was supported by government subsidy. This was done in the hope that when the economy emerged, growling and hungry, from this imposed dormancy, it would instantly reassert itself, as powerful as ever.  The government has since changed its imagery, adopting the notion of the ICU patient who needs to leave the hospital and get off all medication in order to regain health.

Through all this iso-explosion of vocabulary we have had a running commentary from Trump, in particular his attempts to make China the scapegoat for America’s ills. The Chinese response has been unusually terse causing some commentators to note a change in style which they have dubbed Wolf Warrior diplomacy. Wolf Warrior was a successful Chinese action movie released in 2015, which featured heroes from the Chinese special operations forces. It was followed in 2017 by an even bigger success, Wolf Warrior II. To outsiders the films and the response to them seem overly nationalistic. Of course there have been an endless stream of such movies in America, but that is all okay.

I’m not sure that having the words to describe our new situation has made anything any better.  But, as everyone agreed, clear communications were very necessary and finding the right word did perhaps give some sense of control. Certainly some black humour, as illustrated by boomer remover, may have helped us to cope. 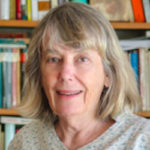 Susan Butler AO was The Editor of the Macquarie Dictionary, Australia’s national dictionary, and, as Editor, was largely responsible for the selection and writing of new words. Susan retired as Editor at the end of 2017.
She has written the Dinkum Dictionary, published in its third edition in 2009. In 2014 she wrote The Aitch Factor, a commentary on usage matters in Australian English. She published an e-book called New Words Changes in Australian English in early 2020 and has another book on language matters coming out in October 2020.