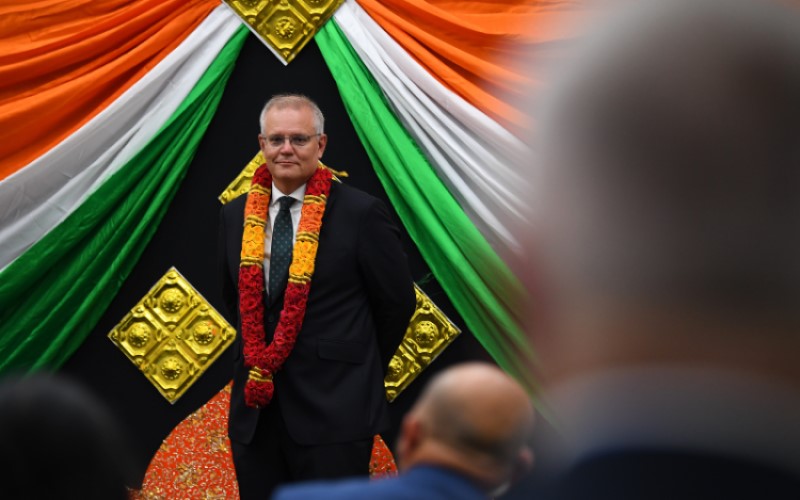 The prime minister’s recent comments to an Australian-Indian audience displayed either an ignorance of history or a willingness to brush over inconvenient truths.

Prime Minister Scott Morrison ventured forth recently in search of the political sacrament of electoral unction — the occasion being his unveiling of a statue of Mahatma Gandhi at the Australian Indian Community Centre in Rowville, Victoria, on November 12.

It was not wondrous to behold. A close examination of his remarks reveals much that was patronising, obsequious, paternalistic, shallow, insensitive and condescending. In the space of three pages of remarks, which probably took 15 minutes to deliver, he managed to, inter alia:

Morrison’s remarks in their entirety have all the hallmarks of being cobbled together by someone who is appallingly ignorant of the history of Indian history in general, and Australia-India relations in particular, or who is knowledgeable of both but hoped that his audience was unaware of the travesties excluded.

Assuming that the Australian-Indian community is given to neither amnesia nor intellectual indolence, what should they, and the wider community, infer from Morrison’s performance? (They already know that the welcome accorded to Indian students derives from the fact that they are a revenue stream for an under-funded education system.)

This is an important question because it goes to the heart of understanding the prime minister himself. The immediate reaction, perhaps, is that this was an exercise in schmoozing an audience for political support at the next election. If it was, then it was based on the assumption that his audience is gullible, and thus it was a performance demeaning to his office and the targeted community.

Even leaving to one side the invocation of his wife’s alleged prowess in a form of Indian popular culture and any excuse he might proffer on the basis of needing to attend to bushfires, the remainder of his remarks do not stand even a cursory interrogation.

The “natural” Australia-India connection Morrison alludes to obscures the fact that Australia’s regard for India prior to its independence was, almost without exception, based on the British empire’s dependence on India as a basic component of imperial power, and that Australia’s defence, by way of corollary, was bolstered by India’s position as an outpost on the empire, enhancing British sea power. India’s contributions in this context were extraordinary; so, too were the betrayals.

In World War I, 1.3 million Indian solders, none of them conscripts, served the empire, and more than 74,000 were killed. In World War II, India provided more than 2.5 million soldiers for the war against the Axis powers, and India was a base for US operations in support of China against Japan. The death toll of this conflict must rightfully include the catastrophe of the war-related Bengal famine which recent scholarship now estimates to have exceeded the previous consensus of 3 million and is more accurately over 5 million.

Thus, while there is no doubt that Australian and Indian forces served on the same side — in the two world wars for example — the conditions and circumstances of this service for India cannot be ignored without giving insult. On both occasions, India was promised by a perfidious Britain that it would be receive at least the dominion status accorded the “white” Commonwealth. It didn’t. Indeed, it took Britain’s enfeeblement after 1945 to ensure independence, and that was only after Britain’s bad faith was irrelevant, the Raj was no longer tenable and India’s trajectory was inevitable.

The relevant history is noxious and Australia never found the wit, courage or imagination to express its opposition to it. Morrison’s appointment of Abbott as his special envoy to Modi was an inexcusable continuation of this disposition.

It was Abbott, as prime minister, who recommended to the Queen that Prince Philip, her gaffe-prone consort, receive a knighthood for services to Australia — a bizarre initiative which he subsequently admitted was “injudicious” but it did at least disclose his mindset. The point here is that the Duke of Edinburgh had a known record of scorn and disregard for India. Particularly hurtful was his challenging of the death toll of the massacre at Jallianwala Bagh in 1919, in which British soldiers opened fire on a peaceful independence protest and killed, according to Indian authorities, over 2000 Hindus, Sikhs and Muslims. The prince’s disbelief, it seems, stemmed from the fact that he had served in the Royal Navy with the son of the officer who had ordered the firing, Colonel Reginald Dyer, and found the accusation unacceptable, no matter its basis.

To this, Morrison is seemingly oblivious. Equally, he must be of the same mind as regards his championing of Modi as a passionate democrat who shares Australia’s commitment to liberal democracy. To put it bluntly, Modi is far from a democrat, and India’s credentials as a democracy have, for some time now, been in a state of severe and increasing disrepair (as noted recently on this site). India’s governance is increasingly characterised by restrictions to fundamental freedoms which are the norm in authoritarian regimes — the broad phenomena being described as “democratic backsliding”.

Morrison’s remarks, therefore, are not in accord with reality but rather are indicative of the world he is determined to assert exists, depending on the audience and no matter the countervailing evidence. In this mode of operating he appears in many guises as a person of infinitely flexible principles. As an easy maker of political enemies with a tendency to authoritarianism and populism, he displays shades of Billy Hughes. For promoting hoaxes, he follows the template of P. T. Barnum. When selling remedies to regional Australia, there are elements of the fictional confidence man in the 1960 film Elmer Gantry. If only a single template is allowed, then, as a reviser of history who needs to deny all contradictions in order to remain in power, he is in direct line of pedigree from the Vicar of Bray.