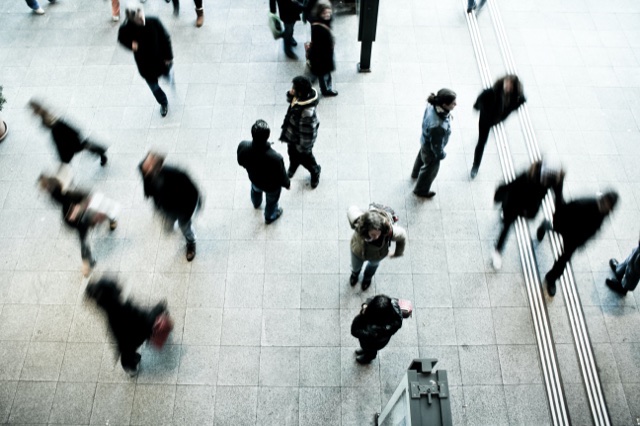 While Prime Minister Morrison initially told temporary entrants in Australia to go home, relatively few followed his instruction. His Government’s new message to these people is to stay and work in largely unskilled jobs. This ignores the long-term consequences of a growing and permanent underclass that will have to be dealt with after the election.

Since Australia’s international borders closed and travel was limited based on quarantine capacity from end March 2020, the volume of people movement (both inwards and outwards) has not only plunged but its composition has also changed dramatically.

Monthly arrivals fell from around 2 million per month prior to covid to around 20,000 in April 2020. By citizenship, these arrivals have been dominated by returning Australian citizens and more recently by New Zealand citizens as part of the trans-Tasman travel bubble (see Chart 1).

Departures also fell sharply from around 1.8 million per annum pre-covid to a low of 35,420 in May 2020 (Chart 2). July to September 2020, departures increased to over 50,000 per annum driven by an increase in departures of Australian, Chinese and Indian citizens. Departures of Australian and New Zealand citizens increased in April 2021 due to opening up of the trans-Tasman travel bubble. 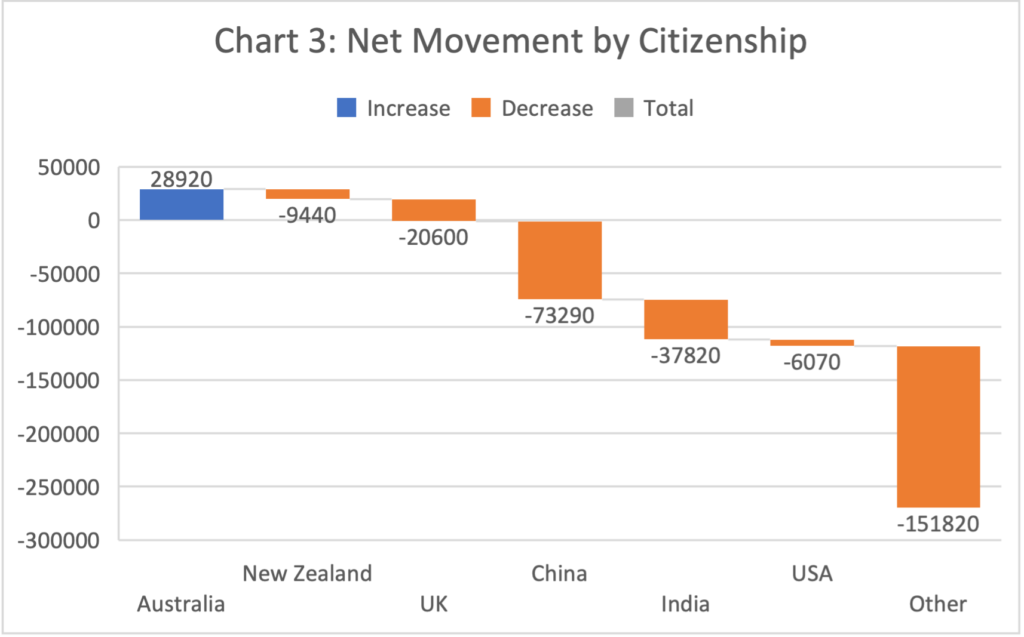 Arrivals by visa category (Chart 4) show a steady increase once places in quarantine opened up from October 2020. Apart from substantial numbers of permanent visa holders arriving or returning (around 5,000 per month), the two other substantial contributions to arrivals have been visitors and other temporary visa holders. This latter group is likely to include people arriving for specific events (eg sports people) as well as for various short term work activities (eg seasonal agricultural workers; key skilled workers and business people).

Departures of people on visas have been dominated by students, particularly Chinese students, visitors and other temporary visa holders (Chart 5). An average of around 3,500 people per month on permanent visas have departed over the 13 months. This has been trending upwards, especially in April 2021 when the temporary suspension of the four year wait for social security had expired (some of these people may have lost access to Job Seeker and had difficulties securing appropriate employment). By contrast, departures of people on student, visitor and working holiday maker visas have continued to trend down.

The overall net people movement of negative 270,120 between April 2020 and April 2021 has included almost 100,000 students, 79,380 visitors and 46,380 working holiday makers (Chart 6). There has been only a very small net contribution from people on permanent visas – slightly more people on permanent visas arrived compared to those having departed reflecting the fact the formal migration program is being delivered mainly from people already in Australia.

The overall stock of temporary entrants in Australia declined from 2,147,998 at the start of April 2020 to 1,740,890 at the start of April 2021 – a decline of around 400,000. This is much larger than the 270,000 net departures being reported by the ABS most likely due to temporary entrants being granted permanent residence, particularly partner visas, Global Talent Independent visas and state-sponsored visas.

The stock of students in Australia declined from 567,924 at the start of April 2020 to 377,725 at the start of April 2021 – a decline of over 190,000. The greater decline in the stock of student visa holders in Australia than being reported as having departed by the ABS is likely due to a mixture of students moving onto other visas, particularly the Temporary Graduate visa, as well as there being a substantial number of onshore student visa applications in the extraordinarily large bridging visa backlog of over 359,981. An extraordinary reflection of visa processing paralysis (or a deliberate policy to slow processing)?

There has been a small but significant increase in the number of people in Australia on the new covid stream of the Sub-Class 408 visa (Temporary Activity). This has increased from 8,773 in June 2020 to 16,365 at the start of April 2021. While international borders remain closed, the number of people on this visa will continue to rise, possibly quite strongly.

The Government has assumed in the recent Budget that international borders will remain closed until mid-2022 (ie after the next Federal Election). With very few temporary entrants now departing Australia, it is likely the stock of temporary entrants in Australia by mid-2022 may not be much different to the current level of over 1.7 million. Almost all of these people will have been living in Australia for at least two years – many will have been here much, much longer.

The policy risk is that many will have abandoned their studies due to the availability of unlimited work rights in hospitality and tourism, and an increasing number will have moved onto the covid version of the Sub-Class 408 visa. There will also be a growing number of unsuccessful asylum seekers, currently around 27,000 but steadily rising – a legacy of former Home Affairs Minister Peter Dutton. The UK situation provides a good example of what happens when a nation ignores a growing number of unsuccessful asylum seekers.

A large portion of the 1.7 million temporary entrants in Australia will have few pathways to permanent migration but will either not want to leave or be unable to leave. Many will become a permanent underclass of exploited people in Australia.

While Australia has long avoided the emergence of such an underclass – unlike the USA and Europe – we can no longer pretend that to be the case.