Personalised politics: the Liberals meet their Jonestown in Victoria 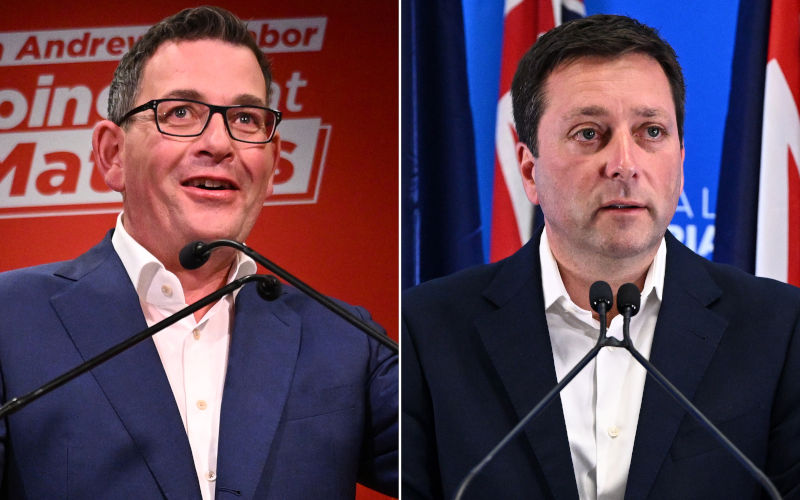 The Victorian Liberal and National parties’ political strategy of targeting premier Daniel Andrews was a dismal failure, underpinned by policies that seemed to fall into a heap of vacuity. Their failure means that Victoria has no credible or viable opposition.

Political campaigns tend to be characterised by matters of personality or issues of policy. Rarely do the two meet in harmonious assembly. Victorian premier Daniel Andrews, considered in certain vestiges of the commentariat as one of Australia’s most divisive figures, was the obvious target for the opposition Liberal Party and their coalition partners, the Nationals. But in the whole festive targeting of the man, policies seemed to fall into a heap of vacuity.

It all came down to the leaders, which left Matthew Guy of the Liberal Party particularly vulnerable. He had already received a harsh and thorough belting the last time around in the 2018 election. Inexplicably, Liberal Party hacks and apparatchiks decided to return him to the position of party leader over Michael O’Brien who, at the very least, offered some sense of sombre critique of the Premier.

A stunning feature in this campaign was how incapable the Liberal Party, and opponents of Andrews, seemed of keeping the policy debate sharp and succinct. Much could have been made about the efforts to ram through the pandemic management bill, which has essentially placed Victoria on a permanent emergency footing, to be triggered by executive direction. It took amendments proposed by minor parties to add, for instance, a right to protest, and to neutralise, to some degree, the vast powers available to the health bureaucracy.

There were other issues specific to the overall management of the pandemic that should have interested party strategists: the leaks arising out of quarantine, the disproportionate social, economic and mental strain placed on vulnerable communities and migrants arising from lengthy lockdowns; the heavy policing of public health orders. But the planners were evidently asleep, preferring to focus with near pathological interest on comic-book villainy with a “Dictator Dan” motif.

What unfolded for Guy and his party in this most personalised of ballots was electoral slaughter, prompting RedBridge pollster and former Liberal Party strategist Tony Barry to draw a gruesome parallel. “The Liberal Party room is beginning to look a little bit like Jonestown. And I suspect we’ll keep on drinking the Kool-Aid next term as well.”

Even on a “bad night”, Barry surmised, the party should have been able to gain 10 seats. Instead, the party failed to make much of an impression on young professional women, and Asian-Australians in such areas as Box Hill, Ashwood and Glen Waverley.

A shell-shocked David Davis, the Liberal Party’s shadow treasurer, could only concede that “headquarters was not good with multicultural communities… I think that is one factor through some of those seats that we’ve got to really focus on.”

Unfortunately for the hapless Davis, he had also shown himself to be less than good with numbers, a failing rather telling in a treasurer. On November 24, after the parliamentary budgetary office’s final accounting of the parties’ policies, he found himself unable to say how much the Liberal Party’s election promises would cost the state.

The predictions and approaches in the conservative media sphere were not much better. The Spectator Australia’s elevation of independent Ian Cook’s electoral chances in the Premier’s own seat of Musgrave must be filed as a treasure.  “Dan faces a highly credible independent candidate, a symbol of hard-working, family small business in Victoria, and a victim of blatant and shocking Victorian government behaviour.”

The independent, like so many of Andrews’ detractors, focused on the man with his “Cook not Crook” campaign. For him, it was purely personal given allegations as to why his business ICook Foods was closed by the Dandenong City Council and Victorian Health Department in 2019. Cook alleges a link between the closure and the creation of Community Chef, a catering business created under the oversight of Andrews in 2009, when he was health minister.

To be fair to Cook, his personalised message did get one vote in five in first preferences, bettering the Liberal candidate, Michael Piastrino’s 15.8% effort. This must have come as something of an embarrassment to a man calling himself the “Italian Stallion” and keen to bring Andrews “to justice for the murder of 800 people”. We await the Musgrave short documentary titled, “The Italian Stallion, the Cook, and the Premier.”

The “teal” effect, which was always going to be less barnstorming than it had been at the federal level, promised to capture two seats – Hawthorn and Mornington – further damaging the Liberals in areas traditionally seen as electoral strongholds. (At the current count, the Liberals may just cling on.)

The Greens also struck a note of triumphalism, but their vote increased from 10.7% to roughly 11%, hardly the stuff of “greensliding”. Ironically enough, the Liberals, in their desperate effort to oust Andrews, channelled voting preferences to Greens candidates by preferencing them ahead of Labor.

In terms of conservative politics, the only party surviving the bloodletting were the Nationals, who managed to pick up three seats in regional Victoria. Up to a point, the personal politics of attacking Dan the Man played out more effectively in such areas. “There is a real resentment for how regional Victoria has been treated during the restrictions, perhaps disproportionately,” insists Deputy Nationals Leader Emma Kealy. “The whole of Lowan didn’t have a COVID case for over a year and still our kids couldn’t go to school.”

Their failure means that Victoria has no credible, or viable opposition, certainly in the lower house. The threat of hubris, already forecast in the less than gracious speech by Premier Andrews, is a foretaste of things to come. In the meantime, as Barry so accurately summarised, the Liberal Party will have an inquiry into its electoral failings which will only serve to protect the guilty and punish the innocent.