“We are one and free” – sarcasm, lie or delusion?

Perhaps Morrison got muddled, fuddled and confused about what he was saying, and got the anthem mixed up in a marketing message about something else, like being “one and the same” with Donald, two sides of the Legion of Merit. 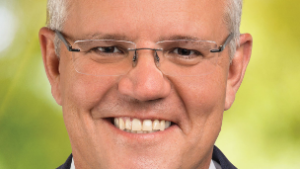 It cannot be described as quaint that Scott Morrison inhabits a cute palace in his head where it is acceptable to say that “we are one and free”. Surely not even Morrison, in one of his mini-Trumpist inspired delusions or imitation of a Trump-lite wilful lie, could think that changing “young” to “one” in the national anthem is anything but a joke in bad taste.

Perhaps it was meant to be sarcastic, a kind of middle-finger to the elderly who died in their hundreds due to rampant exploitation of them in for-profit aged care facilities, and a middle finger to the underpaid and under-resourced workers in those institutions who often needed another job (or jobs) to make ends meet.

To be fair to Morrison, perhaps he got muddled, fuddled and confused about what he was saying, and got the anthem mixed up in a marketing message about something else, like being “one and the same” with Donald, two sides of the Legion of Merit.

Morrison now will always be viewed as Trump’s Australian surrogate, no matter how hard he and his mentors at the Menzies Research Centre and elsewhere try to revise the history of his close association with Trump, and twist it to a new marketing angle of serving Australia’s “national interest”.

Ever since Morrison became Prime Minister he has backed Trump and Trumpism to the hilt, including when Trump refused to accept the election result and sought to disenfranchise the voters of Wisconsin, Georgia, Pennsylvania and elsewhere in a blatantly corrupt attempt to retain power.

By the time that Morrison accepted the US Award of Merit for his efforts on behalf of Trump during the time he has been Australia’s Prime Minister it had long been obvious that Trump was pathologically corrupt, decadent, dishonest, unethical, callous, inhumane and cruel, and probably the most morally bankrupt person to have occupied the White House.

Therefore, while it can be acknowledged that Morrison believes that divine intervention has placed him in the Lodge and that a kind of Louis XVI sense of personal narcissistic hubris glows within him at being recognised as a kind of ex officio member of Trump’s inner circle – his little titanium man down-under – this is a somewhat inadequate explanation for his quest to serve as Trump’s special trumpeter and spruiker whenever asked to do so.

It could be said that Morrison simply followed the Howard model, of course, serving eagerly and energetically as Trump’s puppet in emulation of John Howard’s role as George W. Bush’s lapdog “deputy sheriff”.

In that context it deserves emphasis that a number of senior members of Howard’s administration – including Howard himself – retain influence behind the scenes.

As late as the week before Christmas, at the annual Christmas bash of the arch-right wing Menzies Research Centre, John Howard expressed regret at Donald Trump losing the election by laying blame for his defeat on his failure to deal with the coronavirus pandemic. This was when it was undeniable that Trump was intent on pursuing all means to overturn the election result.

“If Donald Trump had handled the pandemic half-decently he would have won the election,” Howard lamented, apparently willing to ignore all Trump’s attempts to wreck what remained of US democracy, its institutions and its electoral system. Howard’s comments followed a speech given by former National Party leader John Anderson, who also lamented that Trump had been undermined by the media in Australia and the US by characterising him as a “terrible person” rather than analysing his policies.

The conclusion to be drawn from that is that Trump is not a terrible person and his policies are all very nice. “Trump has his flaws”, mused Howard in response, while expressing hope and optimism that Republicans would retain control of the Senate. In short, for Howard, Trump’s grotesque racism, xenophobia, misogyny, rampant vandalism, quest for authoritarian control and complete disdain for the health and well-being of everyone except his cronies, are nothing more than “flaws”, perhaps not even minor misdemeanours in the scale of things.

Howard and Anderson should be taken at their word. Their unequivocal support of Trump is a timely exposure – and reminder – of the extreme right wing views held within the current Liberal and National Parties. They are a timely reminder that the radical anti-intellectualism, the rejection of science, the inhumanity, the contempt for accountability, the acceptance of corruption, the return to old myths of xenophobia and social Darwinism, the dismantling of equality under the law and the promotion of socio-economic inequality in the provision of essential services, are enshrined within the operating principles and goals of the Morrison administration.

It should be no surprise then, that Morrison’s love-in with Trump has actually gone well beyond the frame of Howard’s love-in with Bush, although Howard began the process whereby the notion of the “national interest” shifted towards Australian LNP governments becoming de facto players in support of the US Republican Party.

Since Morrison became Prime Minister that shift has become more transparent. It is not simply that Morrison’s love-in with Trump is based on shared values and policies, like demonising and destroying the lives of refugees, or climate change denialism, or destroying the natural environment, or increasing the wealth of the wealthy, or opposing UN efforts to protect the rights of children, or smashing the age-old Magna Carta rule of habeas corpus.

Nor is it now simply that Australia is a lackey state of the US, neither a nation for a continent nor a continent for a nation. Morrison’s relish at being given a lavish State Dinner by Trump, to serve as his ally in snubbing the United Nations climate summit, to campaign with him in the Midwest in 2019, to actively work on his behalf during the Mueller investigation, to support him on every major foreign policy issue, from embassy locations in Israel to being his proxy in relations with China, goes much further than continuing Australia’s willingness for the US to control its foreign and defence policies.

This has all been confirmed by the most obvious manifestations of direct political affiliation between LNP politicians and Trump, which are now thoroughly normalised. Federal politicians wear Trump MAGA hats. Others openly support Trump’s lies about widespread voter fraud. Joe Hockey, a former ambassador to the US, and avid Trump supporter, whose fulsome support for Trump surely compromised his role as a genuine “Australian ambassador”, publicly supported Trump’s claims of voter fraud.

“We are one and free” is a colossal heap of bull dust, in direct contradiction of everything the Morrison government is intent on achieving in its promotion of inequality, and its determination to wreck the land itself, and in direct contradiction of the reality of servility to Trump’s political interests, a shocking subordination of Australia to the most rotten US administration since the American War of Independence.

“We are one and free” is pathetic in its Versailles-like ignorance of the continent, and its failure to see Australia for what it is beyond the parameters of exploitation and destruction.