PETER LEWIS. When it comes to choosing the US or China, perhaps our chickens are coming home to roost (The Guardian 20-8-19)

Essential poll finds Australians less emphatically American than many would have predicted – is economic self-interest winning?

Australia’s diplomatic imperative of strategic avoidance, its quest to not have to choose between the last remaining superpower of the 20th century and the emerging one of this century, is coming under increasing pressure.

With a bellicose White House whipping up a trade war, the Red Army bearing down on Hong Kong and the rising influence of China in the Pacific, a series of flashpoints are challenging Australia’s determination not to have to pick a team.

At home, politicians from across the aisle have been amping up the rhetoric, one backbencher likening the rise of China to that of Nazi Germany, while the influence of Chinese money on both sides of politics comes under heightened scrutiny.

Implicit in these interventions is an assumption that, if push comes to geopolitical shove, Australians will come to their senses and revert to their traditional western ally. But findings in this week’s Essential report suggest that the public mood may not be so clearcut.

When it comes to the United States of America, we remain largely positive about the republic that gave the world the Declaration of Independence, came to our defence in the second world war and provided a cultural soundtrack from Hollywood to Facebook. 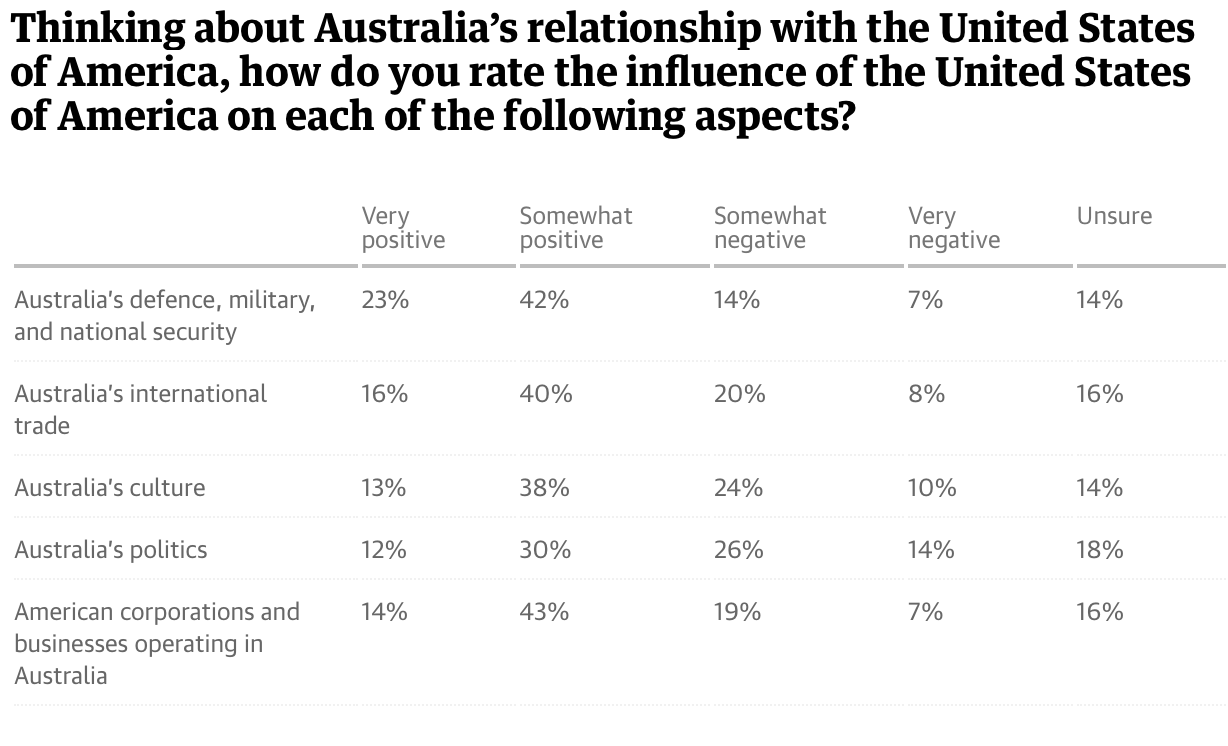 The strongest endorsement of US influence is in our national security and, to a slightly lesser extent, trade. Less clearcut are our judgments on the influence of the US on Australian culture and politics, where a sizeable minority are perturbed about the American influence.

In contrast, attitudes to China’s relationship with Australia are more conflicted. Having ridden the wave of China’s appetite for natural resources for nearly two decades, we recognise the importance of Chinese trade with our economy but there is significant concern about the impact of the relationship on national security and Australian politics. 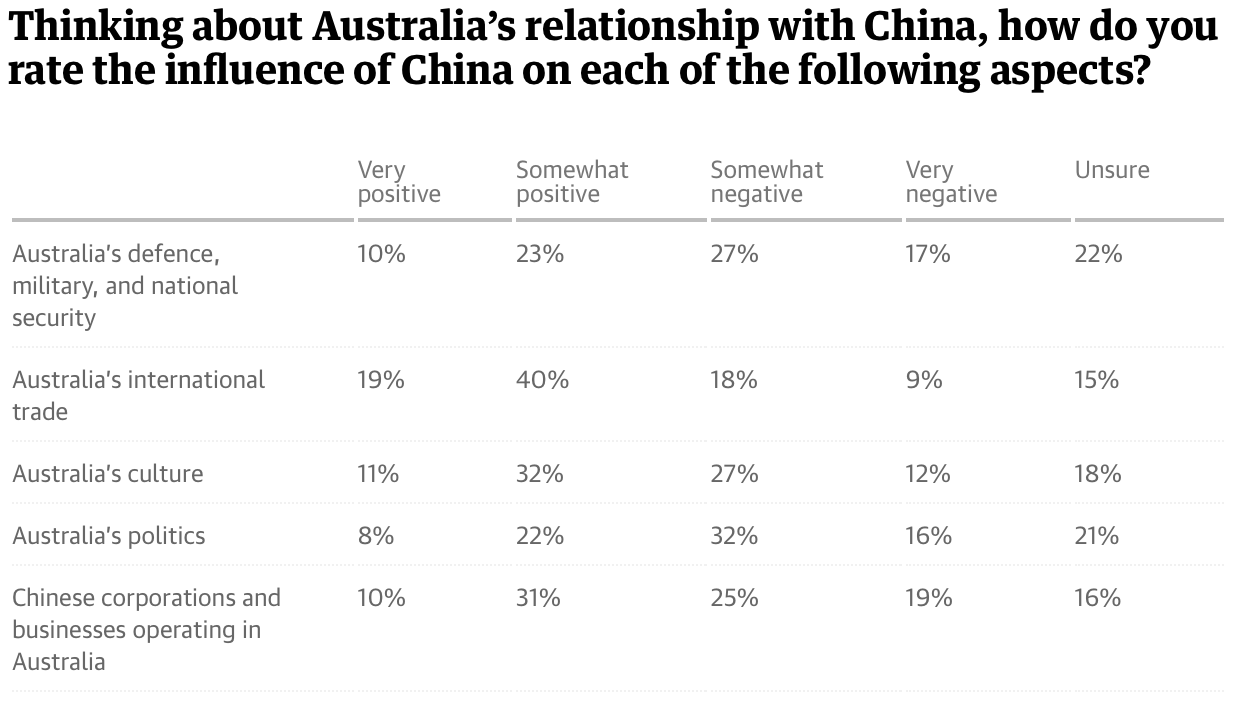 Read together, these findings reflect nuance in our attitudes to both the superpowers and their relative contribution to our national interest. Even at a time of heightened theatrics in both Washington and Beijing, we seem capable of breaking the relationships down to their component parts.

The most interesting table in this series though is what I will call our “preferred superpower index”. If forced to choose between one of the superpowers we are less emphatically American than many would have predicted.

The attitude of voters from the progressive side of politics are particularly conflicted, with Greens voters prioritising relationships with China over the US and Labor voters evenly split. 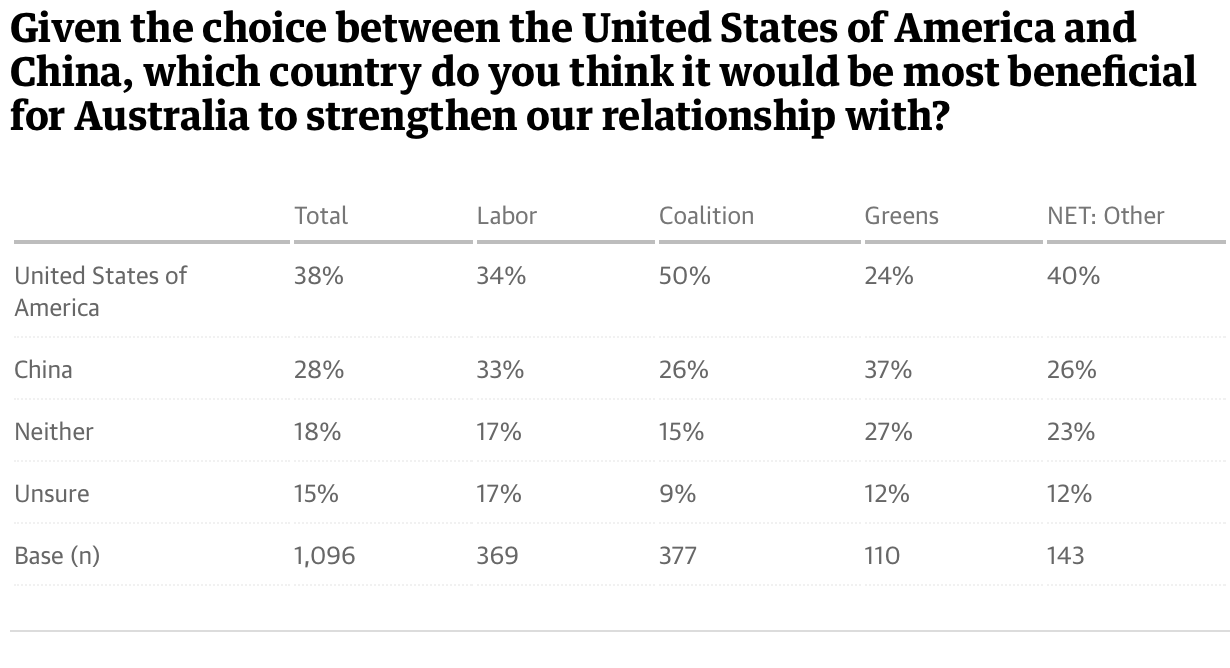 This suggests the reflex glance across the Pacific is no longer our default national geopolitical setting and, with it, assumptions about western cultural asymmetry may no longer be as profound as they once were.

It also suggests we are capable of separating out concerns about the operation of the communist state and the lived experience of a society that is being increasingly integrated within its regional sphere of influence.

Maybe this can simply be read as a particular reaction to the current president and his self-defeating reimagining of American exceptionalism, but I suspect there is something more profound at play.

Perhaps our western chickens are coming home to roost; as Trump and the Brexiteers and, to a lesser extent, our own motley local crew construct political agendas by dumping on the institutions of liberal democracy, they are doing more long-term damage.

Because if our leaders don’t embrace a free press, international conventions on human rights, climate change and separation of powers, then the comparative cost of transition to something less open is not so great.

As western leaders look more and more like despots with little regard for the institutions of liberal democracy, why wouldn’t global politics just become a zero sum game of economic self-interest?

Sure, a dictatorship of engineers may monitor its citizens, repress free speech and expand its economic interest, but absent a clear and functioning alternative maybe we will all just shrug our collective shoulders and look after Number One.

Peter Lewis is an executive director of Essential

This article was published by The Guardian on the 20th of August 2019.