PETER MARTIN. How billionaires get uber-rich at our expense- A REPOST from June 1 2017

“The rich are different from you and me” the saying goes. “They have more money“. But that’s not the only way they are different. In the updated Financial Review Rich List released on Friday, 45 of the richest 50 Australians are men. And they are highly likely to have made their money in real estate or finance; something government-controlled.

Very few of them have made their wealth by expanding what is possible, like Larry Page and Sergey Brin did with Google, Steve Jobs did with Apple, and Bill Gates did with Microsoft.

Instead most have made money by doing things that could have done by anyone, such as being in the right place at the right time to get a mining licence, or land rezoned for redevelopment. They haven’t so much expanded what’s possible as been lucky enough to do would have been done anyway.

But it’s more likely to be because, in Australia, there are more straightforward ways to make money.

Paul Frijters is the coauthor of a new book (with Cameron Murray) about the way Australians make money called Game of Mates.

A few years back he examined the Rich 200 List with economist Gigi Foster for the Australian Economic Review.

They found that “over 80 per cent of the wealthiest Australians have made their fortunes in property, mining, banking, superannuation and finance generally – all heavily regulated industries in which fortunes can be made by getting favourable property rezonings, planning law exemptions, mining concessions, labour law exemptions, money creation powers and mandated markets of many stripes”.

In 2015, two United States economists Sutirtha Bagchi and Jan Svejnar used the international Forbes Rich List and an extensive search of newspaper reports to estimate the proportion of billionaires in 22 countries who owed their wealth to political favours. 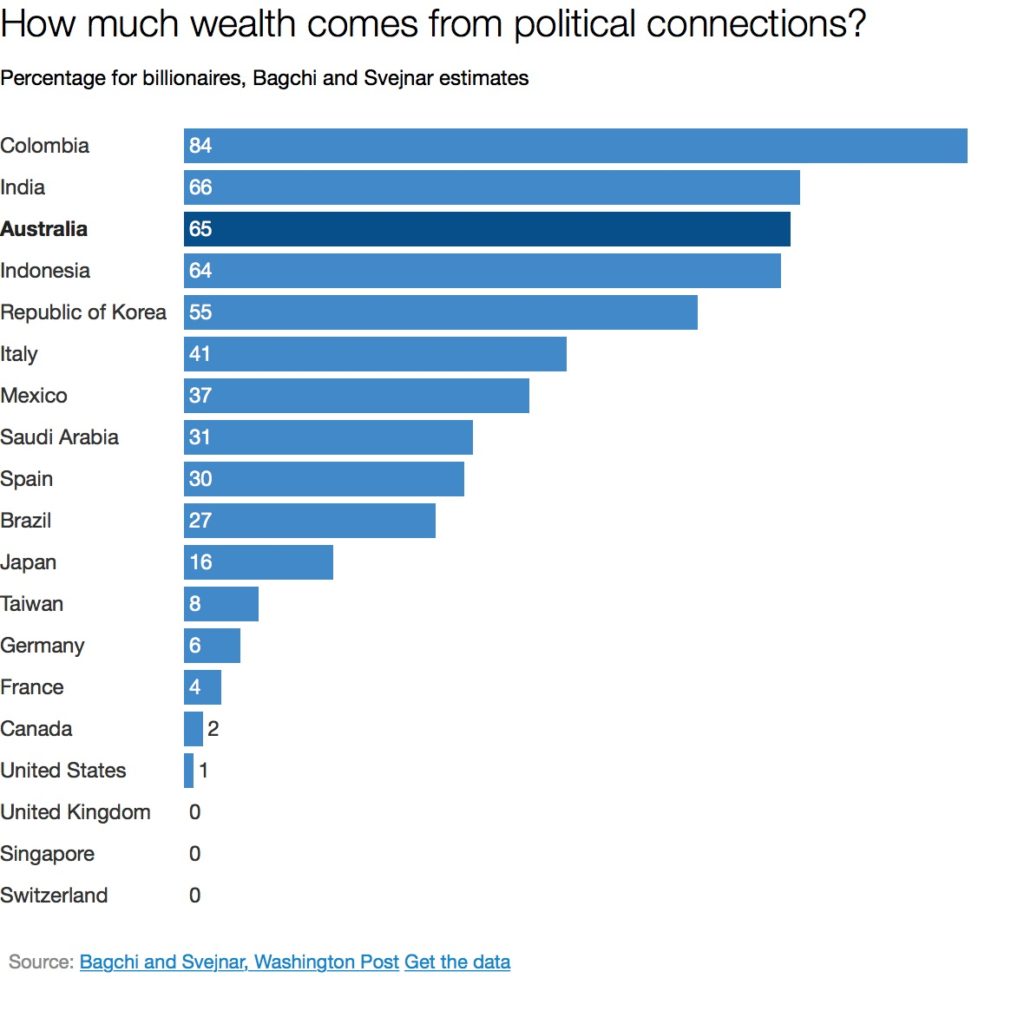 Conceding that their categorisation was somewhat subjective, they said they were “conservative about classifying someone as being politically connected”.

In the United Kingdom, Singapore, Switzerland, Sweden, the Netherlands and Hong Kong, they found no-one; not a single billionaire. In the United States they found only 1 per cent of the billionaires to be politically connected. But four countries stood out.

In Colombia 85 per cent of the billionaires were politically connected, in India 66 per cent, in Australia 65 per cent and in Indonesia 64 per cent.

That’s right, on this one rough and ready measure, Australia had more in common with Colombia than with the United States.

Game of Mates will convince you that seeking favours, be they planning approvals or the right to build casinos or toll roads, is what makes Australia go round. Certainly it makes Australia’s job market go round. Local council planners move into positions with developers, state and Commonwealth government ministers take up positions with companies they used to regulate and former Treasury officials sit on the boards of private banks. The book’s appendix on movements in and out of the offices of mining ministers is eye-popping.

There are two implications. One is that Australia needn’t feel particularly worried about taxing billionaires. It doesn’t much stifle innovation. That’s not how Australian billionaires make their money.

As Frijters and Murray put it: it’s one thing to break into your house and steal your TV, it’s another to set fire to the house on the way out.

Peter Martin is economics editor of The Age. This article appeared in The Age on Sunday May 28, 2016.