PETER MARTIN. It’s time for sweetest tax of them all.

Never before has a tax been such an instant success. I am talking about what happened in Britain last Friday. That’s when new so-called sugar tax sprung into life, with much of its work already done.

The whole idea was to cut the consumption of sugar, something we have just as much need to do here, given that our rates of obesity are on a par with those in Britain – an outrage that will prevent many of us living long lives. 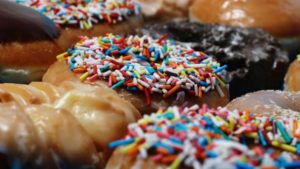 Up to one-third of us are obese, another third are overweight. Thirty years ago it was 10 percent. If you don’t think that’s shortening lives, ask my colleague, Peter FitzSimons. He says everyone he sees aged over 75 is thin. Their heavier contemporaries are dead.

A single can of cola has nine teaspoons of sugar in it. Other drinks have 13 teaspoons – more than double the recommended daily intake.

“I am not prepared to look back at my time here in this parliament doing this job, and say to my children’s generation: ‘I’m sorry, we knew there was a problem with sugary drinks, we knew it caused disease, but we ducked,’” he said.

His tax was clever. It was to apply only to soft drinks, and it wouldn’t apply for two years, until 2018. It would be set at three different rates.

The rate would be zero for drinks with 5 grams or less of sugar per 100 millimetres, meaning some would stay tax-free, including Schweppes Lemonade, Tesco Lemonade and Lucozade Sport. It’d be heavier for drinks with between 5 and 8 grams of sugar. Among them were Fanta, Sprite and Dr Pepper. And it would be high for drinks with more than 8 grams, such as Coke, Pepsi and Red Bull.

His hope was that the drinks above each threshold would cut their sugar until they were below it. It’d cut their tax from 24 pence per litre to 18 pence, or from 18 pence to nothing. They had two years in which to do it.

Within months, Tesco said it would reformulate its entire range to escape the levy. Lucozade Ribena followed, also for its entire range. It meant halving the high sugar contents of Lucozade and Ribena.

By the time the tax arrived last week, Britain had more than halved its initial estimate of what the tax would raise, cutting its estimate for takings in the first year from £520 million to £240 million ($439.6 million to $952.5 million).

The government-owned Behavioural Insights Team reckons around 750 million litres of drink has been reformatted, which would save a welcome 30,000 tonnes of sugar per year, all before day one.

There’ll be more change now the tax is in place. Retailers will more prominently display the cheaper drinks that are lower-taxed, producers will shift their marketing to products they are able to sell for less, and customers comparing prices will be more likely to pick the cheap ones. More manufacturers will cut their sugar content as a result, and even those that don’t will sell increasing amounts of their zero-sugar products and less of those with sugar.

After a while, the sugar tax might raise very little. Which was the idea. The universal truth about tax is that people don’t like paying it. It can be put to good use.

Australia did it with petrol. From 1994 we more heavily taxed leaded petrol, pushing up the price by 2 cents per litre to encourage drivers to switch to unleaded. We do it with tobacco, and, imperfectly, with alcohol.

What’s great about so-called sin taxes (or “Pigovian taxes”) is the double pay-off. Taxing more the things we want less of, including things that kill people, allows us to tax less the things we want more of, such as jobs, income and savings.

Julia Gillard did it big-time in 2012. Her carbon tax raised $14 billion. She used it to pay out$14 million in income tax cuts, grants to industries and increases in pensions and benefits. By taxing “bads”, she was able to cut taxes on “goods”.

Electricity emissions slid during those two years, then climbed again after the tax was axed.

Prime Minister Malcolm Turnbull gets the idea, at least in theory. He said so during the last election.

What about less obesity? If we designed our sugar tax like Britain’s, we could cut consumption from the day it came in. And we could use what we raised to fight obesity in other ways, or to help cut income tax.

We would be joining 30 or so countries already doing it. The Grattan Institute says our sugar industry would barely suffer. It exports most of what it makes, and it would export more if it sold less here, without much further depressing the global price.

It’d be popular too, if you believe the opinion polls. And it might actually do some good.