Relax, there’s no need to follow Trump on company tax – yet

We were mugs to believe what we were told in the election about property prices. The Prime Minister said if negative gearing went and capital gains were better taxed, prices would be “smashed”. His Treasurer said it would “take a sledgehammer” to prices.

Thanks to Freedom of Information, we now know that the Treasury thought the effects were “likely to be small”.

Now they are telling us that a cut in the company tax rate would bring about an “immediate” jump in wages.

“We would expect the effects to be immediate,” Finance Minister Mathias Cormann told ABC’s AM program last week. “Look no further than the United States” he said. “The effect after the Trump administration was able to pass their tax cuts through the US Congress was as immediate as it was dramatic. Immediately a long list of businesses in America provided wage increases and additional bonuses.”

That’s not how it would work here, and certainly not what the Treasury modelling finds. In the United States, whereas a number of companies did lift wage rates and pay one-off bonuses after the tax cuts in January, most did something different. They announced bonuses to their shareholders, big ones.

In the first six weeks of the year they announced a record $171 billion of stock buybacks. Buybacks are payments to existing shareholders that enrich them directly and help them indirectly by pushing up the price of their remaining shares.

It’s more than double the $76 million of buybacks announced by the same time last year. “It’s the largest ever, and nothing has really changed except the tax law,” said Jeffrey Rubin, a director of research at Birinyi Associates, which compiled the figures, in an interview with CNN.

It’s probably what you would do if you got an income tax cut. You’d spend a little on yourself, and only later think about working harder. Opinions differ about what companies will do in the future. The International Monetary Fund expects a short-lived boom in investment as accelerated write-off provisions (not present in the proposed Australian company tax cuts) drag planned investment forward. The Moody’s credit rating agency expects little. “We do not expect corporate tax cuts to lead to a meaningful boost in business investment,” it has told its clients. Its thinking was that if record-low interest rates didn’t ignite investment, company tax cuts wouldn’t either.

What our Treasury thinks would happen here is that foreign companies would invest more, because the returns would be greater, and that local firms would use more of their earnings to grow their business. Investment in more and better machines would make workers more valuable and worth outbidding other employers for. It’s a circuitous way to get a wage rise and far from instant. But new research from Germany suggests it exists.

The research examines the effect of 6800 company tax changes over 20 years in a nation in which 10,001 municipalities were allowed to set their company tax rate independently. It finds that workers got 51 per cent of the benefit of (and shared 51 per cent of the the cost of) company tax changes, which is about what other studies find. In a useful caveat for Australia’s union movement, it found the effect was greater where collective bargaining was greater. In a less attractive caveat for Australia, it found the effect was “close to zero” for large firms, firms that operated across borders and foreign-owned firms.

What matters for Australians (but not for company owners, to the extent those owners are offshore) is the effect on household welfare. The Treasury’s modelling of the proposed cut in the Australian company tax rate from 30 to 25 per cent puts the eventual boost to household welfare at between 0.1 and 0.2 per cent. It would be 0.1 per cent if the cut was paid for by letting bracket creep lift personal income tax collections, or 0.2 per cent if it was paid for by a hypothetical lump-sum tax. The Treasury says the nearest to such a thing in real life is a broad-based land tax.

Not everyone agrees that there would be a boost at all. Victoria University’s Dr Janine Dixon finds there would probably be a net cut in living standards, of about $1600 each. The high proportion of Australian firms owned overseas means more money would be lost in tax and have to be made up for by other tax increases than would be gained by the workers whose wages rose.

Our leaders aren’t particularly open about how they would fund the revenue they would lose by cutting the company tax (and everyone thinks they would lose something, no one thinks the cut would be self-funding). One suggestion from Dr Chris Murphy, who did some of the modelling for the Treasury, is to lift the GST from 10 to 11 per cent. Another is to impose an extra tax on banks, as Britain did when it cut its company tax rate.

Eventually we will probably have to cut our company tax rate, and cut it below 25 per cent. Tax competition from Donald Trump and others, of the kind our Reserve Bank Governor describes as “regrettable”, will make it inevitable. But there’s no reason to rush, yet. Despite what we are being told, at the moment the benefits just aren’t that big.

This article first appeared in the Canberra Times 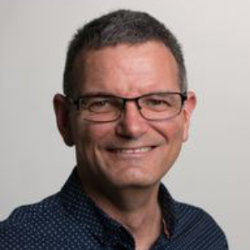 Peter Martin is Business and Economy Editor of The Conversation and a Visiting Fellow at the Crawford School of Public Policy at the ANU.

A former Commonwealth Treasury official, he has worked as Economics Correspondent for the ABC, as Economics Editor of The Age, and as host of The Economists on ABC RN.

In 2016 he was made a Distinguished Alumni of Flinders University.