Bangkok-based Father Michael Kelly – Mick to his mates – is a journalist who became a Jesuit priest who became a savvy publisher and who now runs a complex global religious media empire.

Kelly’s media career began in 1980, and he worked in Hong Kong with the UCA Catholic News Agency (UCAN,) an Asia-wide news service for the Catholic Church, before being ordained as a Jesuit priest in 1984.

Returning to Australia, he established Jesuit Publications and Eureka Street, its monthly journal of opinion in 1989.

But in 1997 he was sacked from his church duties in Melbourne. Media outlets in Australia and the UK reported that he was fired from his publications by the then-Archbishop of Melbourne, George Pell, himself a former Catholic newspaper editor in Ballarat and now a Cardinal.

But Kelly corrects the media version of events.

“My getting the sack didn’t relate to anything I was publishing,” he told Mediaweek. “It was George getting his revenge once he was archbishop for my questioning on Four Corners in 1993 of the truth of his account of an event of the sheer bullying of me.

“He never employed me and so couldn’t sack me. He waited till a weak man became my Provincial. When Pell put the acid on him, I was history in that job.”

Kelly moved to Sydney and promptly founded Catholic Telecommunications in 1997 which became Church Resources, a project he’d been incubating for two years prior to his dismissal.

He relinquished leadership of Church Resources at the end of 2007, and in 2008 became the Bangkok-based executive director of UCAN News.

He says UCAN moved its headquarters from Hong Kong to Bangkok in 1994 in anticipation of the political changes with China in 1997.

“We have 40 reporters, seven text and audiovisual editors, and five news sites – the main site in English and then sites that add local focus in India in English, and in Indonesia, China and Vietnam in their scripts.”

Kelly bedded down UCAN and began to further hone his entrepreneurial skills.

Global Pulse was edited in Rome by Robert Mickens, and produced in Bangkok.

In September 2016, Kelly sold the publication into a joint venture with French publication La Croix, which first appeared as a daily newspaper in 1883, published by Bayard Presse.

La Croix International, launched in November 2016, was the result of the JV, and at the time Kelly told Wan-Ifra that La Croix had been “looking for ways of getting out beyond French and out of France. And we demonstrated the capacity to publish and produce, so that’s where the conversation began.”

On February 9 this year the English-language edition, featuring an interview with Martin Scorsese about his film Silence on the Jesuits in Japan, was launched simultaneously with the 4,000th edition of the Italian version, as well as Spanish, French and Korean editions

In 1850, Pope Pius IX granted Italian Jesuits permission to publish La Civiltà Cattolica, so it was fitting that on the day its first English-language edition was launched, Kelly was at the Vatican to present a copy to longtime subscriber of the Italian edition, Pope Francis. 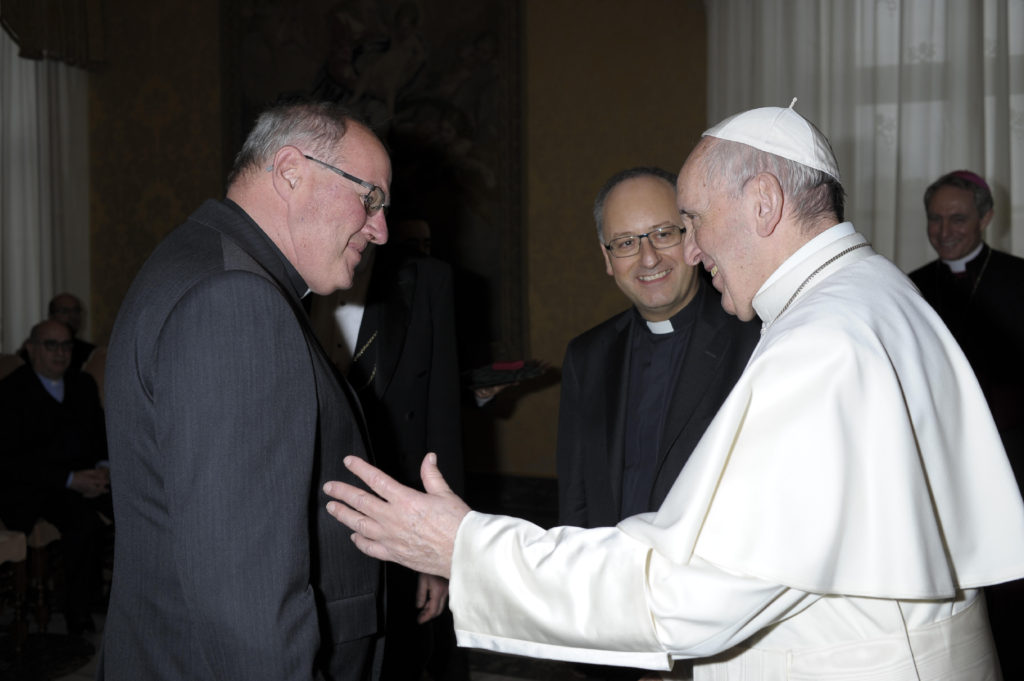 Kelly says he’s a fan of the Pope, and the occasion was a highlight of his career.

This article was first published in Media Week.

This entry was posted in Media, Religion and Faith. Bookmark the permalink.