Despite Australia committing to reduce greenhouse gas emissions by 26-28% by 2030 compared with 2005, the Australian government is projecting, but trying hard to cover up, a 3.5% increase in greenhouse gas emissions between now and 2030. It is also encouraging companies to increase their emissions if they can increase their productivity – thus confusing ‘efficiency’ with the need to reduce the total amount of greenhouse gas pumped into the atmosphere if we are to limit global warming to manageable levels. There is a need for greater transparency and honesty in government communications.

The publication is notable for obfuscation and spin rather than serious attention to the most serious and threatening issue: Australia’s projected increase in greenhouse gas (GHG) emission between now and 2030. Boldly asserting that ‘Australia continues to make good progress in reducing emissions’ the government emphasises (1) reductions over the last 5 years in its own projections of GHG emissions to 2020 and 2030 (attempting to be reassuring with ‘we’re saying that things don’t look quite as desperate now as we said they did in 2012’), (2) a roughly 7% reduction in GHG emissions between 2005 and 2017, and (3) projected reductions between now and 2030 in emissions per capita of population and the emissions intensity of our economy, i.e. how much GHG is emitted per unit of gross domestic product (GDP) generated. The government loves to highlight these last two measures because they hoodwink the casual reader but they are completely meaningless in terms of averting catastrophic climate change. Global warming will not be reduced by greater ‘emissions efficiency’ (fewer GHG emissions per capita or per unit of GDP). It will be contained only by limiting the total amount of GHGs that we pump into the atmosphere; global warming obeys the unchangeable natural laws of physics, not the flaky oft-disputed ‘laws’ of economics or the dark arts of political spin.

What Australia’s emissions projections 2017 report skates over, with no mention of the facts highlighted below in the Executive Summary or a 3-page accompanying fact sheet, is that (see Figure 3 of the report, reproduced below): 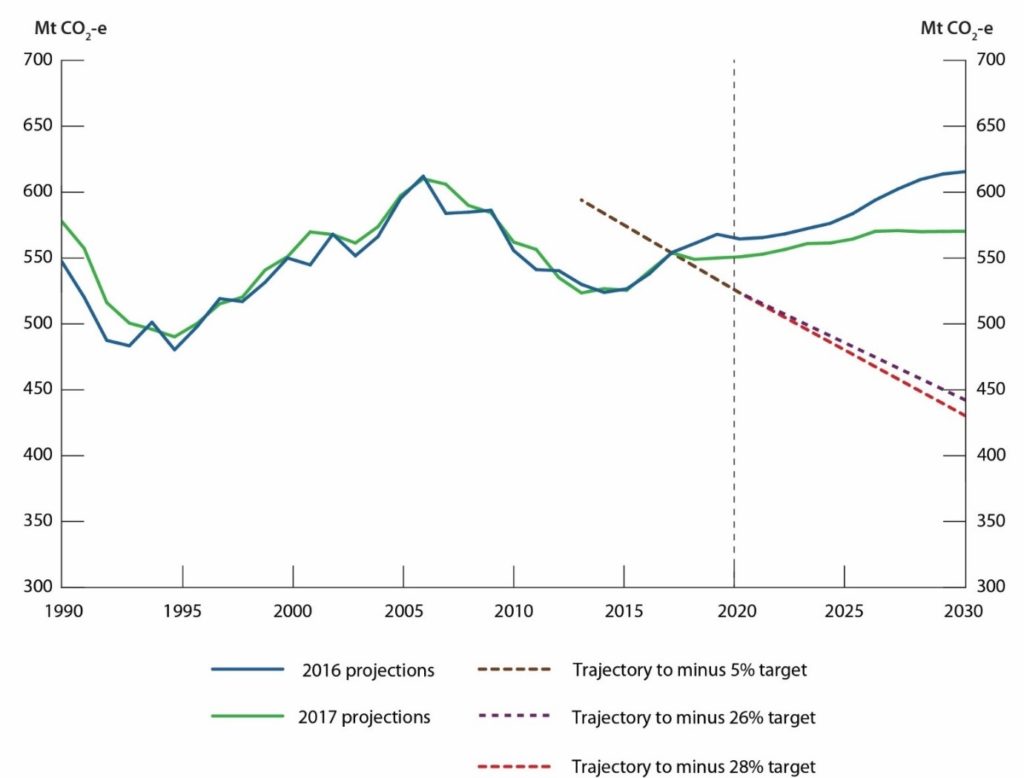 The true measure of the government’s commitment to reducing GHG emissions can be gauged from another report released in December 2017, the 2017 Review of Climate Change Policies (http://www.environment.gov.au/system/files/resources/18690271-59ac-43c8-aee1-92d930141f54/files/2017-review-climate-change-policies.pdf ). No mention at all in this report of the projected increase in Australian emissions to 2030. Rather, the government intends to continue and possibly make ‘fairer and simpler’ (i.e. make more available) the so-called Safeguard Mechanism. This is a safeguard for polluting businesses, certainly not the environment or human health, whereby a facility can increase its GHG emissions if it increases its production capacity by more than 20%. So for instance, a company that produces a million widgets and a million tons of GHGs this year can emit even more GHGs next year if it produces more than 1.2 million widgets. The laws of physics don’t care how economically efficiently GHGs are produced but the government makes explicit that promoting Australia’s international competitiveness and supporting jobs is more important than preventing a global catastrophe.

It is staggering that the Australian government can in 2017 be blithely projecting an increase in GHG emissions over the next decade and encouraging individual companies to increase their emissions. The scientific evidence is clear for all to see. The global average of just over 1oC of warming that we have experienced since the beginning of the industrial revolution is already damaging the natural environment (e.g. dying coral reefs, melting glaciers, ice sheets and permafrost, and rising sea levels), changing weather patterns (e.g. increased frequency and severity of extreme weather events such as heatwaves, droughts and cyclones), and causing highly preventable illness, injury and death in humans around the world.

All nations have agreed to limit warming to 2oC by 2100 but it must be recognised that 2oC has been agreed, after much international wrangling, by the world’s politicians. A rise of 2oC is not, as many seem to think, a ‘safe’ level of warming for the natural environment or human health based on the scientific evidence. A global average temperature increase of 2oC will, for instance, create many regions that are uninhabitable for humans, generate more and more-damaging extreme weather events, threaten food and fresh water supplies, and cause many animal and plant species to become extinct (https://academic.oup.com/bioscience/article/67/12/1026/4605229 ;https://www.climateemergencyinstitute.com/uploads/2C_Chris_Shaw_2015.pdf ). And notwithstanding that nations have agreed to limit warming to 2oC, their commitment to meaningful action remains poor: the cumulative pledges in Paris to take action on GHG emissions will limit warming to only an even more disastrous 3.5-4oC.

Science tells us that to have even a 66% chance of limiting global warming to 2oC by the end of the 21st century global GHG emissions must peak by 2020 and then reduce at 10% per year every year for the next three decades (http://www.rescuethatfrog.com/wp-content/uploads/2017/03/Rockstrom-et-al-2017.pdf ); what Christiana Figueres and others have called the Carbon Crunch (https://www.nature.com/news/three-years-to-safeguard-our-climate-1.22201 ). Another way of looking at it is that emissions must reduce by about 50% every decade to 2050. And even if we achieve that, we will still need to draw carbon out of the atmosphere in the second half of the century to be below 2oC in 2100, something we currently do not have the technology to achieve.

Being positive and focused on the short term, however, to achieve emissions reductions all nations must work together. The developed nations must not only reduce their own emissions dramatically; they must also help low and middle income countries with technology and finance to develop socially and economically while simultaneously leapfrogging the high carbon-emitting fossil fuel powered industrial systems that enabled the rich ‘western’ nations to become over the last 200 years what they are today. During that time Australia has emitted more than its fair share of carbon and has got very rich as a result. It is selfish and unprincipled for us now to argue that we are responsible for a relatively small percentage of all current GHG emissions and hence have little obligation to reduce our own emissions or help other less fortunate nations. It’s time we developed some moral backbone and it’s time the government and Malcolm Turnbull led the way. They could start by being more honest and transparent in their publications and speeches.

Peter Sainsbury is President of the Climate and Health Alliance (www.caha.org.au ).