How much can we trust the certification system for palm oil? Not much according to two reports over the last 4 years. Air pollution kills 3,000 Australians each year – there’s an opportunity to put pressure on ministers to enact higher national air pollution standards. Bankers are increasingly recognising the need for urgent action to combat climate change but governments are planning to increase the production of fossil fuels over the next decade.

Palm oil is in 50% of all household products: soaps, cosmetics, foods, biofuels – it’s a $70 billion per year business. Palm oil is cheap to produce and has a long shelf life. Unfortunately, as is well known, there are many problems associated with its production and use: felling and burning of rainforests, destruction of habitats (most famously of orangutans), fuelling climate change, abuse of Indigenous land rights and poor treatment of workers. Fifteen years ago the Roundtable on Sustainable Palm Oil (RSPO), a voluntary certification system, was established by the industry to ensure that palm oil is being produced and processed to high environmental and human rights standards. RSPO now has 4,500 members (farmers and manufacturers) in over 90 countries. Indonesia and Malaysia, where two million hectares of rainforest are destroyed each year for palm oil plantations, produce over 90% of the world’s RSPO certified palm oil. Shoppers can now look for the RSPO symbol on products for reassurance. Sounds good, doesn’t it.

You’ve guessed it … there’s a ‘but’ coming: the system is often simply greenwashing. In 2015 the Environmental Investigation Agency identified major failures in the RSPO’s system of scrutiny and made a series of recommendations for improvement that the RSPO promised to implement. Disappointingly, a follow up report this year demonstrates that the RSPO has made little if any improvement: ongoing abuse of community land rights, chopping down and burning of primary forests, inadequate and fraudulent auditing on plantations, RSPO ignoring its own rules and colluding with companies to hide violations of standards. Some of the world’s largest manufacturers need to clean up their act: Unilever, Procter &Gamble, Johnson & Johnson, Pepsi, Colgate-Palmolive. The 7 minute video at the end of the link is worth watching.

Most people think we have clean air in Australia but air pollution causes 3,000 deaths per year here and it also responsible for great suffering from conditions such as asthma, lung cancer and heart disease among the living. Australia’s air pollution standards are well below international best practice. The nine Australian jurisdictions have recently completed a review of the air pollution standards for the very toxic oxides of sulphur and nitrogen, most of which originate from coal-fired power stations and vehicles. Remarkably, 18,000 submissions were made to the review. Recommendations for stricter standards are now under consideration by Australia’s nine environment ministers and six need to be in favour for the standards to change. Feel free to encourage your minister to support the stricter standards.

Bankers around the world are waking up to the economic threats posed by climate change. The European Investment Bank, the world’s biggest public lender, will end financing of unabated fossil fuel energy projects by the end of 2021, direct future financing to energy efficiency and renewables, and align all its financing with the goals of the Paris Agreement by the end of 2020. ‘Climate is the top issue on the political agenda of our time’ said the bank’s President. Although all fossil fuels are covered by the ban, there are some loop holes for gas.

Notable not so much for what is being said (it’s all been said before) but for who is saying it, the International Monetary Fund has issued ‘How to Mitigate Climate Change’. The Executive Summary gives the drift: ‘climate change is urgent and existential’, ‘action to date has been inadequate’, ‘policy makers need to act urgently to mitigate climate change’, ‘the longer that policy action is delayed, the greater the cost of stabilizing global temperature’, ‘carbon taxes are the most powerful and efficient [mitigation strategy]’, ‘urgent need to shift energy supply investment toward low-carbon sources’. Communities want action. Bankers and intergovernmental bodies want action. Seems like it’s the national governments in between who are missing-in-action.

Returning to one of my favourite refrains, we won’t solve the climate change problem simply by exhorting billions of people to change their behaviours and burn fewer fossil fuels: use public transport, don’t fly, insulate your house, eat local foods, etc. All worthwhile but changing personal behaviours is not that easy. We must turn off the supply of coal, oil and gas. That may be obvious but it’s not where we are going. Governments are planning to produce 50% more fossil fuels by 2030 than is consistent with keeping warming under 2oC and 120% more than needed for a 1.5oC limit. The gaps are even larger in 2040 and are largest for coal production. The Australian government is projecting a one-third increase in Australia’s coal and gas production by 2030. . If you want to really depress yourself, see what China and India are doing. 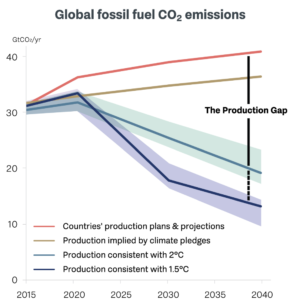