PETER SAINSBURY. Sunday environmental round up.

Without the ‘services’ provided by nature, humanity could not exist – so why do we keep destroying nature? Financial institutions have cold feet about investing in Alberta’s oil sands and the Premier directs a blow torch at their bellies. A follow up to last month’s Siemens story and hints for environmentally sustainable alcohol intake. Finally, a reminder that the Great Barrier Reef is still in danger.

A report presented to the World Economic Forum in Davos has highlighted the high dependence of the global economy on services provided by nature – more than half of global GDP is moderately or highly dependent on such services. This is particularly true in fast-developing countries such as Brazil, India and Indonesia. Agricultural, construction, pharmaceutical and food and drink industries are highly exposed because of their reliance on resources extracted from forests and oceans or on nature’s ability to provide healthy soils, clean water, pollination and a stable climate. The report also identifies the contradictions in trade agreements between developed and developing countries. For instance, some European countries reject products from countries with big environmental footprints and criticise their use of pesticides while continuing to import their beef and soy and export to them chemicals banned in their own country. While it is appropriate to be critical of the ongoing destruction of nature in developing countries in South America, Africa and Asia, the causes of the destruction extend well beyond each country’s boundaries.

The production of petroleum from Alberta’s oil sands is very good for Alberta’s economy (at present) but not so good for the environment, not only because the final burning of the petroleum produces carbon dioxide but also because the process of extracting the petroleum from oil sands produces a lot of greenhouse gases. As elsewhere, financial institutions are beginning to get cold feet about global warming and several have decided to stop investing in Alberta’s oil sands and/or their pipelines. Moody’s has even downgraded Alberta’s creditworthiness because of its dependence on oil sands. This has prompted a pugilistic response by the Albertan government. It has established a ‘war room’ to attack anyone criticising the industry, has indicated that it will stop doing business with the deserters, and has criticised the teaching of climate science to school children. The government has also pointed out the hypocrisy of institutions pulling out of Alberta but continuing to support oil production in Iran and Saudi Arabia that have the added complication of terrible human rights records. Defending his province’s actions, Alberta’s Premier reckons that ‘It’s about responding to an existential threat to Alberta’s — and Canada’s — economy and to the livelihoods of hundreds of thousands of Canadians’. Looks to me like climate change is prompting some of the world’s capitalists to squabble over the generation and distribution of the system’s surplus value.

‘Siemens’ stake in Adani coal mine not even economically sensible’ is the headline of an opinion piece in one of my go-to sources of information, the blog of the Institute of Energy Economics and Financial Analysis (IEEFA). The text under the header is noteworthy not so much for what it says (climate change is a disaster already; we don’t need more coal; global demand for coal is plummeting; the mine will become a stranded asset; financial institutions and contractors are running from Adani because of the financial and reputational risks) as for the credentials of the author, Rob Anderson. I have not previously encountered Mr Anderson but I note that his brief bio describes him as ‘former chief economist at the National Australia Bank and Dresdner Bank, [and] a senior policy advisor to the Australian Treasury and Department of Prime Minister and the Cabinet’. Mr Anderson seem to be a bit out of step with the people he advises. (For those in holiday mode in January, Siemens’s decision to provide the signalling on the new rail line needed to take the coal away from Adani’s proposed Galilee Basin mine was met with a storm of criticism which itself prompted a bellicose response from now ex-Minister Canavan.)

OK, so you like a drink but are worried about the carbon footprint. What can you do?

Who knew that those little stickers on the fruit you buy can increase climate change?? The stickers are made of plastic and are not biodegradable. This can result in composting facilities rejecting loads of rotting fruit which then goes to landfill instead, decomposes without oxygen and produces methane. Non-plastic alternatives are available.

With the focus, understandably, on the bush fires, the fate of the Great Barrier Reef has been pushed into the background this summer. However, warm seas have started to cause some coral bleaching. The photograph below, showing several bleached corals, was taken by Lyle Vail off Lizard Island on 21 February. The Great Barrier Reef Marine Park Authority is putting out excellent weekly updates on conditions on the Reef. I thoroughly recommend the 3-5 minute video updates for February 20th and 27th by Dr David Wachenfeld, GBRMPA’s Chief Scientist. 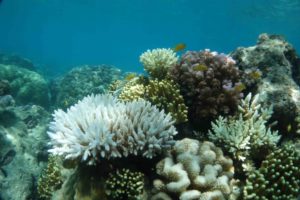