Ship owners start to clean up their highly polluting fuel; forests are being felled and burned around the world but ordinary Brazilians want more done to prevent the loss of their iconic rainforest; and the fashion industry starts walking the talk on environmental sustainability. Finally, Saudi Arabia ? and Timor Leste ? have different feelings about Australia.

I am neither a marine engineer nor a petroleum chemist but, as I understand it, after all the good stuff has been distilled off from crude oil you are left with a range of cheap and highly polluting petroleum products that are still burnable. One, high sulphur fuel oil (HFSO), also known as bunker fuel, has been used to power shipping for years and is largely responsible for the 2% and rising of global carbon dioxide emissions attributable to shipping, To get to the (moderately) good news, the International Maritime Organisation decided some time ago that from 1 January 2020 the maximum sulphur content of HFSO for ships without sulphur scrubbers will be reduced from 4% to 0.5%. Result: demand for and price of HFSO has plummeted recently. The demand for HFSO is expected to fall by 60%. Shipping’s pollution problems are not limited to sulphur or only to commercial shipping. Cruise ships also burn bunker fuel and dump enormous amounts of a range of pollutants into the water and air while at sea and when docked – ask people who live near cruise terminals. (Incidentally, international shipping’s CO2 emissions are not included in any nation’s emissions inventories.)

80,000 acres of rainforest are destroyed worldwide each day. If I’ve done my homework correctly that’s a square with 18km sides … every single day! Annually it’s an area about the size of Belgium. Three of the most affected rainforests are the Brazilian Amazon, where deforestation is mainly for growing soy and raising cattle; forests in the Democratic Republic of the Congo, for mining valuable minerals and timber; and forests in Indonesia and West Papua for timber, mining and palm oil plantations. A mosaic of illegal activities, corruption, human rights abuses, intimidation and conflict, and pollution of land, rivers and air operates in all three locations. The details in the article paint a very depressing and distressing picture.

Regarding the increased land clearing in the Brazilian Amazon since Bolsonaro became President and the extensive fires that have garnered considerable publicity recently, it is particularly interesting to note that ordinary Brazilians place a very high value on their rainforest. Over 90% feel that the Amazon is essential for Brazil’s identity and pride and for the health of the Brazilian and global environment, and are concerned about and want the President to prevent illegal deforestation. Even those who voted for Bolsonaro feel the same.

And while I’m talking about the fires in the Amazon rainforest, if you are wanting to gain a better understanding of how they start, how they spread, why the situation is currently getting rapidly worse, the threats they pose and what can be done about it, I thoroughly recommend this article by Dan Nepstad, a forest scientist with decades of experience working in South America. Nepstad highlights the role of the normally shaded, damp ground-level scrub in preventing the spread of fires and the disastrous consequences when this layer dries as a result of logging and drought. Vicious cycles are established and at some point, possibly soon, there will be insufficient trees in the forest to maintain the rainfall which is essential to the Amazon’s survival. Nepstad makes recommendations for Brazil and the international community for better fire detection and better firefighting to control fires in the short-term, and better prevention in the longer-term.

Here’s a first for P&I, I suspect: a hyperlink to an article in Vogue. Stella McCartney (you know … environmentally-conscious fashion designer, daughter of Paul) has used activists from Extinction Rebellion as glamorous models in the advertising campaign for her new collection. Needless to say, she and the activists have received quite a bit of blowback – hypocrisy seems to be an underlying theme. As the author of the Vogue article discusses, however, there is no single, simple, obvious or even unconflicted path of action to combat the climate crisis. For me, the actions of Ms McCartney and the ER activists demonstrate the need to be clear about why you are doing something: what specifically are you trying to achieve in the short term and how does it contribute to the ultimate goal? Perhaps Ms McCartney’s campaign is an ‘unfreezing’ activity: using the tools at her disposal to unfreeze the minds of sections of the community who may not be well acquainted with global warming or the contributions of the fashion industry to environmental destruction. As one of the activists involved in the campaign says: ‘at the end of the day, we’re all hypocrites. It’s really hard to be perfect in an imperfect system’.

Vogue hyperlinks are like London buses: none for ages, then two in a minute. President Macron has initiated a Fashion Pact with 32 companies (including some that even I have heard of) to reduce the industry’s environmental impact in three areas: achieving zero greenhouse gas emissions by 2050; restoring biodiversity; and preserving the oceans, particularly by reducing the use of single-use plastics.

All smiles below for Scott Morrison, Senators Corman and Birmingham and the de facto head of government of one very rich fossil-fuelled country (with a dubious, to be generous, human rights record but very powerful friends) at the G20 Summit in June. Previous heads of government of Timor Leste, a country with aspirations for fossil fuel riches but of no strategic relevance, weren’t quite so happy when talking about Australia’s disgraceful negotiating strategies, contempt for international law and shocking ethical standards during this week’s Four Corners program on the prosecution of Witness K and Bernard Collaery. 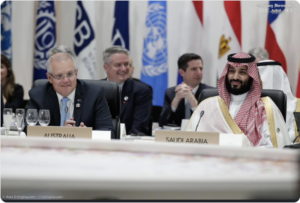