Water features strongly this week: while Birdlife Australia is being innovative to protect our water birds, the governments and shooters of Tasmania, Victoria and South Australia are wilfully destroying them in the hundreds of thousands; the citizens of Toledo (think Klinger, not El Greco) approve a Lake Erie Bill of Rights; Melbourne’s water supply is threatened by logging native forests; and, perhaps drawing a longish bow, financial institutions are abandoning their support for coal (the mining of which requires a lot of water).

Each year millions of Australian shorebirds undertake migrations of thousands of kilometres to and from the Arctic. Some, remarkably, do it in single hop, but most have B&B stops along the way. Unfortunately, many of the coastal wetland areas in Australia, Asia and North America where birds stop for a rest and a feed have been, and continue to be, destroyed by developments. The result is that our shorebird numbers are declining alarmingly. To provide a stopover for these long-haul flyers, Birdlife Australia is trialling the use of 1000 oyster bags to create artificial floating roosts in Philip Bay, the Hunter Estuary and Japan. (Don’t miss the short video of Red-necked Stints standing on a floating island of seagrass.)

The voters of Toledo, Ohio, have passed the ‘Lake Erie Bill of Rights’, giving Lake Erie the right to ‘exist, flourish,  and naturally evolve’ and citizens the right to sue polluters on the lake’s behalf. Despite a strong ‘No’ campaign, 61% voted in favour of the measure, demonstrating that it isn’t just greenie zealots who are concerned about the environment (and their water supply). Toledo joins a growing number of places with ‘Rights of Nature’ legislation.

On Friday P&I carried an article by economist Jeffrey Sachs, not known for Marxist sympathies, arguing that the currently much discussed Green New Deal for the USA is (a) necessary and (b) economically feasible. Earlier in the week, Ross Gittins made the economic case for closing down the native-forest logging industry in Victoria’s Central Highlands. Not only does the industry (worth about $12 million per year) rely on government handouts to survive but also logging in the Highlands is destroying Melbourne’s water supply, which has an annual economic value of approximately $310 million. It’s good to see respected economists destroying the tired old argument that concern for the environment will cripple the economy.

Approximately half of global CO2 emissions come from burning coal. To prevent catastrophic global warming (too late to prevent extremely harmful warming), coal has to disappear completely from the energy mix in the next couple of decades. Financial institutions are increasingly waking up to the fact that coal is a dying industry and 100 financial companies, including some major global players, are reducing their funding of coal. In a recent report Tim Buckley, Australian expert on the coal industry in China and India, says: ‘For environmental, reputational and financial reasons, thermal coal is a toxic asset for global investors increasingly announcing new and improved policies responding to climate change’. Talk of the demise of coal in Australia elicits vigorous assertions to the contrary by the usual suspects and the industry aggressively promotes its interests to all and sundry. But where is the voice of the renewables industry telling pollies and the public about the environmental and economic superiority of their product?

Returning to waterbirds, it’s disappointing that in Tasmania, South Australia and Victoria it is legal to shoot ducks – in a country where native wildlife is supposed to be protected. In Victoria alone, as the graph below demonstrates (page 18 of the report from the Victorian Game Management Authority), approximately 400,000 ducks are ‘harvested’ each year – based on the shooters’, no doubt honest, self-reports. Better look out, ducks, the three months of legal massacre is now open for all those good sports with guns; you’d be safer if you were a brumby. What a literally bloody disgrace! 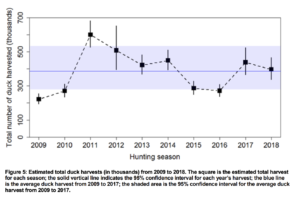