PETER SAINSBURY. Sunday environmental round up, 10 May 2020

Australians think they have it tough with bushfires, coronavirus and bleaching of the Reef but the people of Pacific and African nations have a multitude of other problems to cope with as well – few of which they caused. Are the world’s governments up to the challenge of creating the structural change needed during the post-COVID recovery? CO2 emissions may be down this year but will it last? And will it make any difference to the world’s melting glaciers and ice sheets?

While Australia has been dealing with the crises of the bushfires, coronavirus and the all-but forgotten bleaching of the Great Barrier Reef (the third in five years), several Pacific nations have suffered another disaster related to climate change. Tropical Cyclone Harold hit the Solomon Islands, Vanuatu, Fiji and Tonga in early April causing over thirty deaths and great damage to homes, infrastructure and communications. This article by an inhabitant of Vanuatu summarises the challenges of managing Harold and coronavirus simultaneously. The author highlights ‘a great injustice: Pacific nations produce only a tiny fraction of global emissions, but the Pacific and its people are on the frontlines of climate change. Cyclones are getting stronger and more frequent, rising sea levels are threatening the very existence of low-lying islands, and warmer oceans and coral bleaching mean less income for fisherpeople. Countries with high per-capita emissions have the power – not to mention the responsibility – to mitigate these changes. But so far, meaningful steps towards emissions reduction have been few and far between.’ Nor have developed nations fulfilled their promises to make US$100 billion per year available to support climate action in developing nations.

From small island states to a continent. African nations face multiple challenges. In the short term, dealing with the coronavirus pandemic itself while exports of raw materials (including oil) collapse in the face of a global recession. In the longer term, developing national energy security, moving towards a low carbon economy, and charting a development and transformation plan to lift millions out of poverty. Tackling climate change may not be a priority for African governments in the immediate post-coronavirus world, and selling oil and gas may be attractive to governments now, but longer-term development plans will need a different resource base: ‘economy and ecology are two sides of the same development coin’.

In essence, developed countries have caused the Earth’s ecological problems, continue to make them worse, benefit from the ongoing production and burning of fossil fuels and ignore the disastrous consequences being suffered by those who have done least to cause the problem and have the least capacity to respond. As the article from Vanuatu concludes: ‘So my plea to the leaders of polluting countries is this: in your moment of economic crisis, please, build back better. For all our sakes’.

This is a sentiment shared by George Monbiot. ‘Do Not Resuscitate. This tag should be attached to the oil, airline and car companies’, says Monbiot in his plea for governments to bail out the planet, not its destroyers. According to Monbiot, governments completely fluffed their first chance in 2008 when they bailed out the rich, the banks and the dirty old economy. 2020 is humanity’s second chance – it may be our last. But governments are showing every sign of repeating the mistakes of 2008 – with the very same players holding out their hands for the cash. Monbiot calls for structural change to the energy, transport and building industries, to taxation and wealth distribution and to urban design. He wants to change the name from a stimulus package (‘we’ve stimulated consumption too much’) to a survival package for bailing out people, humanity and the living world.

Energy-related (i.e. not total) carbon dioxide emissions were more than 5% lower in the first three months of 2020 than in the corresponding period in 2019. Emissions from coal were down 8%, oil down 4.5% and gas down 2.3%. Emissions in China, the USA and the European Union were all down 8-9%. The International Energy Agency (IEA) is predicting an 8% decrease in emissions for the whole of 2020; caused by a decrease of 2.4Gt of CO2 emissions (1.1 Gt less from coal, 1 Gt less from oil and 0.4 Gt less from gas).

The graph below clearly demonstrates that the annual decline in energy-related CO2 emissions is the largest ever, twice as large as 1945 and six times as large as 2009 in the immediate aftermath of the GFC (the unlabelled vertical axis is the annual change in Gt of CO2 emissions). It all sounds a bit like losing a pound and finding sixpence to me (younger readers, if I have any, may need to look this up). The Guardian has highlighted other findings from the EIA’s report.

All that said, empty skies, empty roads, empty office blocks, empty educational establishments, whole industries shut down, economies collapsing – and all we’ll get is an 8% fall in emissions!! That’s the real indicator of the challenge ahead.

To close, some great illustrations of the effects of climate change on glaciers, ice caps and ice sheets globally and in Antarctica and Greenland between 2003 and 2019 (the lower two graphics showing the average annual change in ice thickness). While there are regions in both Greenland and Antarctica that have gained ice (from higher snow fall), these are vastly overshadowed by the loss of ice – 200 gigatons per year in Greenland and 118 gigatons per year in Antarctica – causing about 14mm of sea level rise. Most of the ice loss occurs from ice shelves that flow into the ocean at the edge of land masses, although this particular source of melting causes no sea level rise. 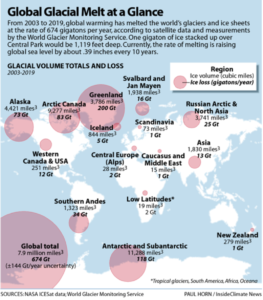 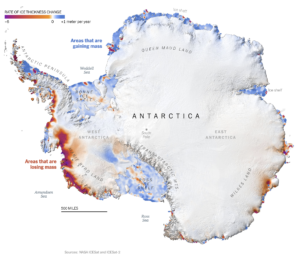 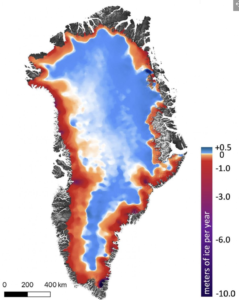