Nearly all about climate change this week: 20 fossil fuel companies responsible for producing 35% of all greenhouse gas emissions and confusing the public and politicians about the causes of climate change; the USA starts the formal process of withdrawal from the Paris agreement: will others follow? is the Paris agreement dead in the water regardless?; and security companies making big profits from climate migrants. Finally, our sea eagle chicks fledge and Richard Flanagan talks about birds.

Twenty coal, oil and gas companies are responsible for the production of 35% of all greenhouse gases since 1965, the year a report to President Johnson clearly explained the risks of human induced climate change and when the President of the American Petroleum Institute told its members of the risks. Many of the companies are privately owned – household names such as Chevron, ExxonMobil, BP, Shell and BHP – but many are state owned by, for instance, Saudi Arabia, Russia, Iran, India, Venezuela and China. The video embedded in this Guardian article clearly explains the futility of expecting the climate change crisis to be abated by individual behaviour change: changing demand. It is essential and urgent that supply is restricted and this means the fossil fuel companies rapidly curtailing production, voluntarily or as a result of government policy.

The activities of fossil fuel companies over the last three decades in confusing politicians, policy makers and the public about the role of fossil fuels in creating climate change, exaggerating the costs of renewable energy, and delaying appropriate policy action are well documented. ExxonMobil, one of the world’s largest companies, not simply one of the largest oil and gas companies, whose brands include Exxon, Mobil and Esso, has (I’d better say ‘allegedly’) been a prominent sower of this obfuscation and doubt. Less well known is that in the late 70s and 80s Exxon held a somewhat different position. They recognised the dangers associated with burning fossil fuels, were conducting and publishing robust research to better understand the issues, and were seeking to participate in the development of responsible responses. The full story of ExxonMobil’s early concern and their reversal is revealed in a report by Inside Climate News. Also interesting is a news clip from 2015 when New York state began legal proceedings against Exxon for alleged fraud relating to misleading shareholders on the issue. Rex Tillerson, ex Exxon CEO, ex Trump buddy, recently gave evidence in the case.

President Trump has this week made good on his commitment to notify the United Nations that the USA will withdraw from the Paris climate change agreement (it’s worth looking at this link just for the picture of the three stooges). The USA will formally exit the agreement in November 2020, immediately after next year’s Presidential election. Despite this and despite the roll-back of many pieces of domestic environmental legislation by the Trump administration, Climate Action Tracker predicts that the USA’s greenhouse gas emissions will still slowly decline over the next decade. By 2030 USA’s emissions will be only 3% higher than they would have been without Trump’s actions, and still 13% lower than 2005, although this is nowhere near what is required to keep global warming under 2oC. Essentially, Trump’s policies have not stopped the rapid decline of coal-fired power or the rise of renewable energy in the USA. Although the USA’s domestic emissions are continuing to fall, they are exporting lots of emissions. The USA is now the world’s largest producer of both crude oil and natural gas.

Contrary to fears, the USA’s much publicised intention to withdraw from Paris over the last two years has not prompted any other countries to follow suit. Russia has even joined the Paris agreement recently, although I won’t be holding my breath for any increased commitment by Putin to reduce their emissions. The big question is whether the Paris agreement will hold together over the next few years without the USA’s participation, or will all the other nations, despite being signed up, lose enthusiasm for making the emissions reductions necessary to stay under 1.5 or even 2oC? A Democrat in the White House might re-join Paris in 2021 but is the Paris agreement so fundamentally flawed that the USA’s participation is largely irrelevant?

Climate change is recognised as a contributor to the war in Syria which displaced millions and of the migration of people in South and Central America to the USA and people in West Africa to Europe. Reports from the Red Cross and the UN’s International Organization for Migration estimate that within 10 years 150 million people will require humanitarian assistance due to climate change and that by 2050 there may be 200 million climate migrants. The USA and countries in Europe are responding to this by increasing their investment in border security and detention facilities. Private companies, part of the ‘border industrial complex’ (a new phrase for me), are profiting hugely from this and are protecting their interests by helping to shape immigration policies. And as reports from Australia’s detention centres suggest, they are also guilty of human rights abuses. This is all part of the emerging ‘disaster capitalism’ business – private companies making money by providing responses to the problems caused by capitalism in the first place.

Two birdy pictures to finish this week. First, an empty nest, which is great news because I’m delighted to tell you that Sydney’s two White-bellied Sea-eagle chicks that I’ve been updating you about over the last few months are now fully fledged. To have two eggs produce two fully fledged young eagles is a fantastic result this year. Second, a picture of a beautiful Eastern Rosella from a lovely but also sad article about birds by Richard Flanagan. 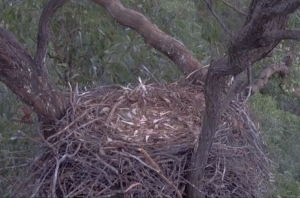 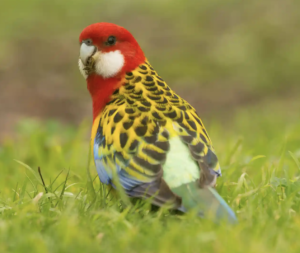