Sunday environmental round up, 11 August 2019

Last week we were deep in the oceans. This week we’re high in the sky: the global warming effect of air travel and ways of reducing it: technology, government intervention, industry initiatives, personal behaviour change and buying carbon offsets. And if you’re still keen to get on a plane, stories from Bangladesh and the Mekong Delta in Vietnam.

Greta Thunberg has been in the news again this week, not this time for berating world leaders about their dilatory approach to tackling climate change but rather for her travel plans to her next round of plain speaking. There are some important climate change meetings coming up in the Americas but the redoubtable Ms Thunberg refuses to fly because of air travel’s carbon emissions. How to get there? Answer: a low comfort, but also low carbon, racing yacht.

Of course, Ms Thunberg’s dilemma is not new. Air travel accounts for just over 2% of global carbon dioxide emissions – incredibly, the emissions from international flights, just over half of the total, are excluded from the Paris Agreement and nations’ commitments to reduce their emissions. Additional global warming is caused by the water vapour and chemicals exhausted from plane engines that freeze to form contrails – the white streaks you see behind planes high in the sky. When air traffic is heavy these can spread and mingle to form clouds that trap the earth’s heat. Aviation-induced warming is projected to increase at 5% per year as a result of the increasing demand for air travel as developing nations become more affluent. (As an aside, if this increase doesn’t happen the Australian and NSW governments are going to be left with an underutilised flashy new airport in western Sydney and their plans for an aerotropolis-driven ‘Western Parkland’ city in Sydney’s west in complete disarray.)

So, how to tackle the current and increasing emissions from air travel? Should we rely on individuals changing their behaviours and refusing to fly like Ms Thunberg, or at least buying carbon offsets whenever they do take to the air? Should governments step in and limit air travel in some way? – for instance by imposing large jet fuel or landing taxes to increase the price dramatically. Or should they build high-speed electric rail systems such that the only international air travel that would be needed would be crossing the Atlantic and Pacific Oceans and getting to and from Australia and New Zealand? What about technological innovations: more efficient planes to reduce emissions or electric planes to eliminate them? Is the airline industry’s current (pretty pathetic) CORSIA program sufficient? Whatever it is, some solution must be found – unchecked, international air travel alone could push warming to 5oC this century.

Returning to carbon offsets – paying someone else to reduce their emissions or increase their carbon sink while you continue to emit: are they part of the solution? There’s a compelling argument that the climate emergency is so desperate that we all need to reduce our own emissions and preserve existing or create new carbon sinks. According to this argument, purchasing offsets to ease your conscience while sipping a G&T in business class over India is a bit like paying a beggar to mourn at your mother’s funeral while you play golf. But let’s assume you’ve decided to fly but you want to minimise the damage. What confidence can you, a concerned traveller, have in the offset deals offered by airlines when you book your ticket? Is the airline taking you for a ride (so to speak)? And even if the airline is genuine, how comfortable can you feel that the appropriate number of trees will be saved from logging in Brazil? There’s no easy answer to that dilemma; it rather depends on how much you trust your airline (Qantas v Cheap&Cheerful-Jet) and how much information they give you about the schemes they support.

An alternative is to organise the offsets for yourself, and there are websites to help you. Organisations such as Gold Standard, Green-e and Cool Effect help you support projects that have verified environmental integrity when reducing their carbon emissions. Many of the projects on offer are in developing countries and also contribute to sustainable development. The cost of removing a tonne of carbon from the atmosphere seems to be in the range US$5-20 for most of the projects. As a rule of thumb, this suggests that for every hour you spend in the air, you should be purchasing Aus$1-2 of offsets. So, a Sydney-London round trip would work out at $45-90.

Should Vietnam still be on your travel plans, you might care to consider the environmental problems in the Mekong Delta, an area of tremendous agricultural and economic importance to Vietnam. In particular, the intensive farming of rice in the Delta is threatened by unsustainable agricultural practices (river and groundwater irrigation and high fertiliser use), rising sea levels, land subsidence, dams on the Mekong River, reduced delivery and retention of river sediment, other sectors’ water demands, and soil and water salination. The causes of some of these environmental problems, particularly the construction of dams in China and Laos, are beyond Vietnam’s control. But the Delta produces food for almost 200 million people and collapse of the agricultural sector will cause food security problems beyond Vietnam’s borders.

Here’s a photo and article to wind up the Righteous Right: transgender people in Bangladesh rallying for a safe climate. Evan Ahmed Kotha, a transgender activist said: ‘Climate crisis is a global problem and we (Bangladesh) are the ones who are badly affected. So, I would like to ask the entire world to stand beside us so we can put pressure on high carbon emitting countries.’ 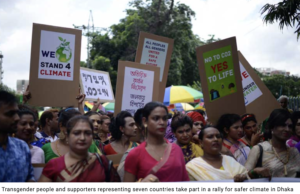