Biodiversity features heavily this week: a distressing update on bleaching on the Great Barrier Reef but good news that the right action now could restore the Earth’s oceans to good health by 2050; the Tasmanian government hellbent on logging native forests; and the decline of Spotted Frogs in the USA heralding bad news for humans. Finally, a cause and effect conundrum.

In recent weeks I have provided links to a couple of the weekly, very informative 5 minute video briefings  on the health of the Great Barrier Reef (GBR) by Dr David Wachenfeld, Chief Scientist at the Great Barrier Reef Marine Park Authority. Dr Wachenfeld’s concern that the GBR might experience another mass bleaching event in 2020 has now been confirmed. Earlier this week Professor Morgan Pratchett from James Cook University provided a synopsis of the results of a recent aerial survey (minutes 5-21) of 1000 of the GBR’s 2000 reefs. Morgan’s talk clearly demonstrates the dramatic build-up of heat in the waters of the GBR in January and February – indeed February recorded the hottest ever sea surface temperatures on the Reef – and the mass bleaching that has occurred along the length of the GBR, most severe in the southern half. This is the third mass bleaching event on the Reef in five years and has occurred in the absence of El Nino which brings warm waters to the Queensland coast. Not all corals that bleach die but many do and recurrent bleachings provide insufficient time for corals to recover and lead to long term degradation of reef systems. Professor Morgan concludes ‘climate change is the foremost threat to coral reefs (including the Great Barrier Reef), and the only way to prevent ongoing bleaching is to reduce CO2 emissions’. I’ll conclude with this tweet (and 3 minute video) from Professor Terry Hughes, the leader of the aerial surveys in 2016, 2017 and 2020: ‘I’m not sure I have the fortitude to do this again. It’s heartbreaking to see the Great Barrier Reef decline so fast’ (@ProfTerryHughes, 7 April 2020). 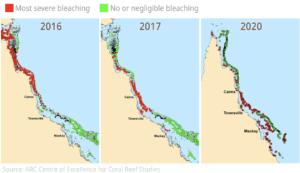 Somewhat more positively, a report in Nature  documents the recovery of the abundance, structure and function of marine life and ecosystems after conservation interventions. Despite decades of overfishing, coastal destruction, ocean acidification, oxygen loss and global warming, immediate determined efforts to protect large areas of the oceans and coastal areas in marine conservation areas, control pollution and transition to sustainable fishing could fully restore the health of the world’s oceans in 30 years (the original paper is behind a paywall unfortunately). The authors claim that the financial cost would be returned ten-fold in terms of food security, better coastal protection from rising sea levels and storm surges, and absorption of carbon dioxide. ‘If you stop killing sea life and protect it, then it does come back. We can turn the oceans around and we know it makes sense economically, for human well-being and, of course, for the environment’ said co-investigator Callum Roberts.

Although global warming is the major threat to coral reefs, land use changes, predators and chemicals also damage and reduce the resilience of coral reefs. A similar combination of threats is also bad news for frogs. Spotted Frogs used to be widespread, common and noisy in the Rocky Mountain states of the USA but now they are rare. Damming rivers for expanding, water-hungry human populations, such as Las Vegas, has destroyed many of the frogs’ wetland habitats and longer, deeper droughts caused by climate change threaten many remaining wetlands. Spotted Frogs are very adaptable to a range of habitats and climates but they are particularly vulnerable to the hotter summer days, rather than the higher annual average temperatures, associated with global warming. Also, chytrid fungus, which has already rendered 90 species of amphibians extinct worldwide and whose global spread is associated with climate change, has devastated the USA’s mountain-living Spotted Frogs, but not those that live in springs in the deserts. The serious decline in Spotted Frog numbers is a disaster in itself  but the widespread loss of natural ecosystems and habitats which it indicates also poses problems for humans.

The Tasmanian government is currently examining what would be required to achieve net zero carbon emissions by 2050. So you might think that the state, which has been a native forest battleground for decades, would be wanting to facilitate the achievement of this goal by stopping all further logging of native forests and putting their money into restoring degraded forests rather than propping up the doomed forestry industry. But no, on Tuesday the Tasmanian Minister for Resources issued a press release that included this statement, ‘Where the industry can demonstrate a need for the wood, the Government would welcome any future applications’. ‘Need’ presumably referring to a need for more woodchip and veneer for export, although it might relate to the burning of the 60% of the timber which is simply left on the ground and burnt to prevent any native forest regrowth and hence facilitate conversion to plantations. No logging applications have been received so far but the Gutwein government is clearly keen to open up for commercial logging the 356,000 hectares of high conservation value native forest that have previously been protected under the Tasmanian Forest Agreement. Forests that are the homes and breeding sites for threatened species such as the Swift Parrot, Tasmanian Devil and Spotted Quoll. That is all by way of background to encourage you to watch Christine Milne (‘Save Tasmania’s Forests: Virtual Rally’, 8th April 2020, minutes 27-35) excoriate Tasmanian governments of both persuasions, timber unions and the forestry industry for the years of revolving doors for staff, rorts and public money wasted on logging industry exit packages, retraining programs and new job initiatives that allowed companies to re-invent themselves a few years later and re-enter the space.

A reasonable explanation of the top graph below might be that whatever the red line represents the arrows seem to indicate events that caused or at least helped it to increase and to do so at an increasingly rapid rate. A more sceptical explanation would be that the events indicated by the arrows had nothing whatever to do with what the red line represents. A third explanation is that the increase represented by the red line precipitated the events shown by the arrows. The lower graph, with the details restored, suggests to me that explanation 3 is the most likely. The creator of the graph, Wolfgang Knorr, a climate scientist, is none-too-complimentary about the failure of climate scientists to be more active in bringing about climate action over the last 40 years. 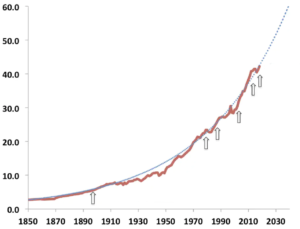 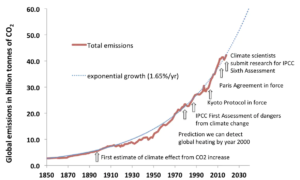