The dismal failure of the Madrid COP meeting in December starts the round up for 2020, and no one should be surprised by Australia’s disgraceful performance in Madrid when they see the government’s latest greenhouse gas emission projections to 2030.  In better news, the highest court in the Netherlands has required the government to reduce greenhouse gas emissions by 25%. Nothing about the fires themselves, just a couple of observations about reactions to them.

Two days after its scheduled close, the Madrid climate change (COP) meeting finished on the day my last round up of 2019 was published. In that round up I identified six much-needed indicators of success for the negotiations . Unfortunately, my hopes were unfulfilled:

Had the negotiators’ performance been judged like a student’s, they would be required to re-sit the exam. What’s that? Yes, you’re right, they will get another chance later this year in Glasgow. They’ll need to do a lot of work behind-the-scenes between now and then though to improve the results. Perhaps some of the more ambitious nations (??? led by China, the UK and the EU) need to set up an informal parallel process to push things along. And Australia, one of the most disruptive students in class, will need to improve its attitude and stop associating in the playground with delinquents such as the USA, Russia, Saudi Arabia and Brazil.

Multiple reasons have been identified for the failure of the Madrid meeting to deliver the much-needed progress in limiting greenhouse gas emissions and coping with the consequences of climate change. One of the enduring weaknesses of the whole UNFCCC process is the requirement for consensus which allows individual or small groups of countries to block progress. Another problem is the negotiators’ focus on the arcane wording of diplomatic agreements rather than the urgent tasks of actually reducing emissions, promoting adaptation, and helping poorer nations that are already suffering loss and damage from climate change. The now habitual use of overtime at the end of the Conference also works, possibly intentionally, to exclude developing nations from last minute decisions. If you are very keen to know more about the meeting, this is an excellent issue-by-issue summary.

A long running legal case in the Netherlands came to a close just before Christmas with the Dutch government being required by the courts to reduce greenhouse gas emissions by 25% by the end of 2020 compared with 1990.  The Dutch Supreme Court, the highest legal authority in the Netherlands, rejected the government’s appeal against similar rulings in lower courts. The case against the government had been brought by Urgenda, a Dutch climate and sustainability organisation. The legal arguments pitted the government’s inalienable right to set national policy against its obligation to protect the rights to life and wellbeing of citizens. Rather like recent climate-related legal rulings in NSW, this will be seen as an important precedent world-wide.

No need for me to cover the bushfires – I’m sure readers have enough access to words and pictures to know what’s going on, including some excellent commentaries in Pearls & Irritations. Two observations. The one good thing to come out of the fires is that Morrison’s true colours have been on display for all to see: ignorance, superficiality, lack of respect and incompetence. Second, there is speculation that the fires are a social tipping point in the determination of the nation to act on climate change. Time will tell.

The government is projecting a 4.3% decline in Australian greenhouse gas emissions between 2020 and 2030. That’s a total decline of 4.3% over the whole 10 year period (i.e. 0.4% per year), not an annual rate of decline. And just in case you were already in festive mood and missed my last round up of 2019, were global emissions to start coming down now we would need reductions of 7.6% per year to stand a reasonable chance of keeping warming below 1.5oC, and if we delay until 2025 the annual rate of reduction will need to be 15.5%. Difficult to believe that will happen as emissions are still rising globally and there was so little appetite in Madrid for increasing corrective action. 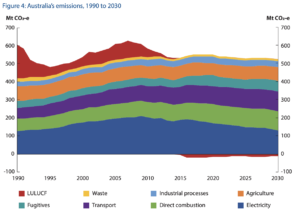