A physical trip to the USA looks unlikely in the foreseeable future so I’m taking you on a virtual tour this week. Stories about the effects of warming on life in the largest and smallest states, the harmful effects of heat and air pollution on pregnant women and their foetuses, and, in better news for the environment and humans, three oil and gas pipelines hit stormy weather. And dropping into the UK on the way home, even the Royal Family is abandoning fossil fuels.

Question: what do these two aerial photographs of the same area in Alaska in 2002 and 2019 show and what is the red arrow pointing to? Answers further down. 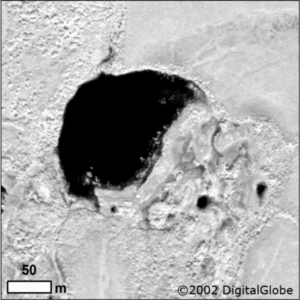 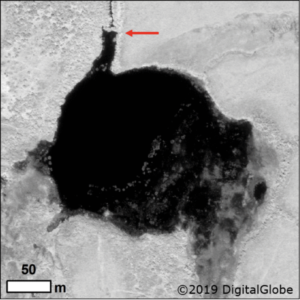 A systematic review of 68 research reports (involving a total of almost 33 million births) in the USA since 2007 has demonstrated that air pollution and high temperatures are both related to poor birth outcomes. Exposure of pregnant woman to PM2.5 (a very fine particle that is a common component of air pollution) or ozone was associated with a higher incidence of premature birth, low birth weight and stillbirth. Similarly, exposure to high temperatures during pregnancy was associated with a higher incidence of the three unwanted outcomes. The magnitude of the increased risk was mostly around 10-15% if exposure occurred throughout the pregnancy. Women from non-European, particularly African-American, backgrounds were at particularly high risk of delivering premature or low birthweight babies if exposed to air pollution or heat during pregnancy, as were women who had asthma. There are plausible biological mechanisms to explain how air pollution and heat cause poor birth outcomes. For instance, the worse outcomes for black (i.e. socially disadvantaged) populations in the USA may be related to where they live. It is not uncommon for neighbourhoods housing lots of poor black people to be closer to sources of air pollution (for instance coal-fired electricity generators, industrial plants and busy roads) and more likely to experience the urban heat island effect, and for their homes to be less likely to be air conditioned.

Oil and gas pipelines have been strongly contested issues in the USA for many years, with battles fought not only in the courts. The last fortnight has seen three wins for the environment: arising from two separate court decisions concerning oil pipelines, work on the Dakota Access Pipeline must cease while a new environmental review is conducted, and approval to restart construction of the Keystone XL pipeline was denied; and the companies responsible have abandoned plans to build the Atlantic Coast Gas Pipeline. There are many more pipelines in the pipeline but community activism, legal challenges, falling demand and prices, and a potential change of President combine to make the future for oil and gas less rosy.

The map below might be the closest you’re going to get to the USA for a couple of years so I’m showing it to help you read an article by a young and obviously talented journalism and environmental science student about rapidly rising temperatures in New England, not to remind you of what you’re missing. Most of what we hear and read about global warming relates to the 1oC that the temperature has already risen in the last couple of hundred years, the need to keep the temperature increase below 2oC or even better 1.5oC, and the track we’re currently on to hit 3 or 4oC of warming this century. But these figures are the average change over the whole surface of the globe – land, water and ice; highland and lowland; desert, forest and pasture – and they mask large regional variations. Abby Weiss’s article highlights the higher than average warming that is occurring in several regions of the USA and focuses on the greater than 2oC increase already being experienced by the folks of New England. Possible explanations for this localised higher than average warming include warmer winters that produce less snow and ice and leave more of the land exposed, exchanging heat-reflecting white surfaces for heat-absorbing dark ones; warming of the adjacent Atlantic Ocean; different flow patterns in the atmospheric jet stream; and changes to the North Atlantic Ocean’s Gulf Stream that deliver more warm water from the south and less cold water from the north to coastal areas. Summer temperatures are also increasing and Connecticut is set to have summers like present-day South Carolina, 1300 km to the south. To add to the local problems, rising sea levels, higher rainfall and stronger storms will likely produce more storm surges, flooding and economic damage to New England’s coastal communities. But it’s not only coastal communities that will feel the effects: farmers will also have to cope with more droughts and higher temperatures inland. No prizes for guessing the recommended response: flatten and bend the greenhouse gas emissions curve globally. 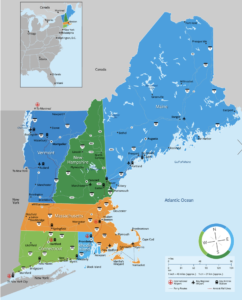 Queen Elizabeth is taking her money out of fossil fuels – well, sort of. Coutts, the private banker to the Royal Family, has committed to drop its investments in tar sands, Arctic oil and gas exploration and thermal coal extraction and generation and to reduce the carbon intensity of its holdings by 25% by the end of 2021. Longer term, they aim to reduce the emissions of their entire holdings by 50% by 2030. According to a senior Coutts executive, ‘We want to minimise our exposure to anything that’s inherently unsustainable because we believe the growing push to protect the environment will ultimately impact the value of the companies involved’. Critics suggest they could go further, such as investing more in renewable energy and, while they do still hold investments in fossil fuel companies, investing only in democratic countries with high standards of accountability. Nonetheless, if Australia’s queen is getting out of fossil fuels, it seems disloyal to me, treasonous even, for Australia to keep digging, pumping, burning and exporting them.

Back to the photographs at the top and one of my favourite stories of the year. We all know that global warming is causing permafrost to thaw and that as it thaws it releases methane and carbon dioxide which increase global warming, which causes permafrost to thaw more quickly, which … you get the picture. Now we have to factor beavers into the equation. Beavers are moving into the areas where permafrost has melted, building dams, creating bigger and deeper ponds (the red arrow is a beaver dam), and further increasing the rate of permafrost thawing. In a 70km2 area in NW Alaska the number of dams increased from 2 in 2002 to 98 in 2019, and their industry produced two-thirds of the increased surface water area during this time. This may be bad news for permafrost and climate change but it’s good news for the animals and plants that need to find new, more northerly habitats as their old ones are destroyed by anthropogenic climate change. 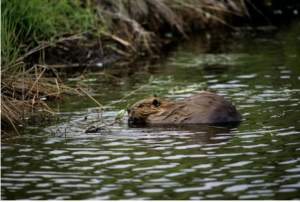