PETER SAINSBURY. Sunday environmental round up, 12 May 2019

A new petrochemical and plastics hub is being developed in the USA based on locally mined unconventional gas, while the carbon dioxide produced by Australia’s exports of coal and natural gas greatly exceed our domestic carbon dioxide emissions. In better news, authors of a recent scientific paper have looked at climate change and loss of biodiversity together and come with proposals that will benefit both.

Climate change is undoubtedly the most discussed aspect of humanity’s multiple assaults on the natural environment over the last 250 years, particularly since 1950. Loss of biodiversity (often expressed as the sixth great extinction) might be the second most discussed. But there are other equally serious, though perhaps not quite so pressing, threats to maintaining an environment that can sustain human life, for instance shortages of fresh water, disruptions to the nitrogen and phosphorous cycles, and ocean acidification. The Planetary Boundaries concept identifies nine domains of principal concern.

Although it is well recognised that the nine domains are closely inter-connected – in the causes of their problems, in ways that they influence each other, and in strategies required to keep the earth hospitable to humans and other species – discussion of any one often ignores the others. A recent scientific paper has, however, tackled two of the domains simultaneously – climate change and loss of biodiversity – and proposed a ‘Global Deal for Nature’: the objective of which is to protect ecosystems to combat climate change and to combat climate change to protect ecosystems. The authors recognise that global warming above 1.5oC will increasingly destroy ecosystems that provide environmental services that are essential for humans (e.g. coral reefs and the Amazon) and that natural ecosystems (e.g. plants, soil, the oceans) are immense sinks for carbon dioxide – sinks that are far better understood, safer, more effective, and more readily available on a pressing timescale than the proposed, untested, artificial carbon drawdown technologies. Building on, for instance, EO Wilson’s concept of Half-Earth, the central goal of the Global Deal for Nature is that we should protect at least 30% of the earth’s land surface by 2030 and 50% by 2050 (with similar goals for the oceans). The authors present many scientifically justified strategies to achieve this, including stopping ongoing assaults such as forest clearing, overfishing and building roads and dams in inappropriate places. (The original paper is lengthy but interesting.)

Plastics have been found throughout the biosphere: on the surface and in the depths of the ocean, at the tops of mountains, in the atmosphere, and of course all over the land. The problem is well recognised and some action is being taken to try to reduce the problem but it looks as though our production of plastics might well increase in coming decades. For example, in northeast USA a new petrochemical and plastics manufacturing hub is being developed, with the old steel city of Pittsburgh at its centre. This hub is based on ‘cracking’ ethane from unconventionally mined natural gas. No points for guessing who is leading the charge to establish the new ethane cracking industry: Shell. (Interestingly they are starting in Potter Township, Pennsylvania. Capra fans will note the dark parallel to Pottersville in ‘A Beautiful Life’. If you haven’t seen the movie starring Jimmy Stewart do yourself a favour, watch it soon.)

Australia’s domestic carbon emissions have been increasing slightly in recent years and are projected to continue to increase until about 2030. That said, in the longer term they have pretty stable for two or three decades. Not so the emissions from the coal and natural gas we export. Carbon emissions from those are currently about double our domestic emissions and rising rapidly. 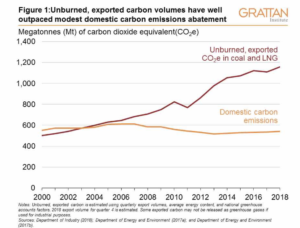