The ALP supports the Adani mine in the Senate, assisting Australia’s exported carbon emissions to increase greatly. The USA’s coal industry continues to decline but not without first screwing the workers and the environment to maximise short term rewards at the top. Bill McKibben identifies three strategies for tackling the urgency of climate action, while Barnaby continues to express his passion. Fortunately Victoria delivers a couple of pieces of common sense.

At last the ALP has jumped down from the fence and adopted an unequivocal position on the Adani Carmichael coal mine development. On July 4th the ALP voted unanimously in favour of this motion in the Senate: That the Senate supports the development of the Carmichael Mine project and the opening of the Galilee Basin.

Does anyone know the backstory to this?

Readers of Friday’s P&I may have seen this Freudenberg-Calwell quotation from 1964 referring to Calwell’s opposition to the Vietnam war:

‘I offer you that sure and certain knowledge the generations to come will recall with gratitude that when a reckless government wilfully endangered the security of this country the voice of the Labor party was heard, strong and clear.’

Not much chance of future generations recalling with gratitude the ALP’s strong voice on climate change.

Bill McKibben has been fighting the good fight against climate change longer than most. He’s a journalist but rapidly realised that simply educating people about the science and the consequences of global warming was not going to change the world. So he developed new strategies: mobilising people, confrontation, divestment, undermining fossil fuel companies’ social licence and linking action on climate change to action on social justice. In The Climate Movement: What’s Next? he identifies three priorities for creating the global change needed in the short time left: easy-to-join consciousness and profile raising programs (think Greta Thunberg), fighting for effective government policies, and an overarching framework to inspire action, McKibben’s example (I have my reservations) is the USA’s Green New Deal. To McKibben’s recommendations I would add the need for a theory and process of change that starts from the urgency of the situation. Climate activists have lots of strategies at our disposal to move us along the track towards an environmentally sustainable, equitable, peaceful global society. But which of them are likely to create the global changes needed within the timeframe available, i.e. the next decade if we are to avoid an environmental and human catastrophe? Until we tackle this question, we’re keeping ourselves busy without necessarily doing anything useful.

Fossil fuels rest on a foundation of colonialist exploitation and rent-seeking. That’s how they came in; that’s how they’ll go out’ concludes a recent report from the USA. Notwithstanding the President’s best efforts, the coal industry in the USA is dying, and faster than expected; first Appalachia and now Wyoming and Montana. While that’s good news for the environment and human health, during the industry’s death throes coal producers are causing many local social and environmental problems: ‘vulture capitalists are buying up mines, squeezing the last bit of profits, and declaring bankruptcy, leaving behind an environmental mess and workers without jobs or pensions’. All while directors and executives continue to receive hefty bonuses and legislatures turn a blind eye or freeze in the headlights. No need for Australians to feel left out though – it’s all coming to a community near you.

For a bit of light relief let’s see what climate science expert Barnaby Joyce has to say about climate change: ‘I believe this is one of the greatest policy phantoms, the misguided and quite ludicrous proposition that Australia can have any effect on the climate. If we could, we should be the first to make it rain and, more importantly, stop the recurrence of an ice age any time in the coming millennium’. Once again Barnaby demonstrates his shaky understanding of the consequences of uncontrolled emissions and his reluctance to take full advantage of safe, low cost, widely used prophylactic technology.

Fortunately, Victoria provides a couple of pieces of better news. First, responding to the inevitability of the demise of coal (and of logging native forests), Friends of the Earth has produced ‘Transforming Vic: Creating Jobs While Cutting Emissions’. Recommendations include: secure good jobs for affected workers, priority for Indigenous and excluded communities, regional planning rather than plant-by-plant responses, building community power (in both senses of the word), rapid transition to 100% renewable energy, rapid and deep emissions cuts, no more fossil fuel development, mine rehabilitation, and ending logging of native forests. FoE proposes a Victorian Just Transition Authority to plan, oversee and manage the required transition, and a Minister for Transition. This is the sort of planning that is required in all regions affected by climate change itself and/or by the policy responses that will eventually be implemented. Or we could just listen to Barnaby.

Second, the Victorian government is providing financial support for a new recycling plant to be built in Melbourne’s northern suburbs which will be powered by a wind farm under construction near Ballarat. The recycling plant will process 70,000 tonnes of waste each year. This will include turning almost half of Victoria’s plastic waste into plastic flakes which are then used to create more of the things that have been recycled: drink bottles, food containers, fencing, furniture, pipes and clothes. A win-win … I think.

This week’s graph, from page 4 of ‘Evaluating the significance of Australia’s global fossil fuel carbon footprint’, presents more evidence to combat the Australia’s-emissions-are-too-small-to-matter argument. Three points to note: 1) Australia’s combined domestic and exported fossil fuel emissions currently account for about 5% of global CO2 emissions; 2) this will increase over the next decade (based on current government and industry projections to about 13% of the global emissions compatible with limiting warming to 1.5oC); and 3) our exported emissions (‘don’t blame us, we just dig ‘em and sell ‘em, others burn them’) consistently and increasingly exceed our domestic ones. Global warming aside, Australian coal will kill thousands in Asia every year from air pollution. How good is Australia, ScoMo? 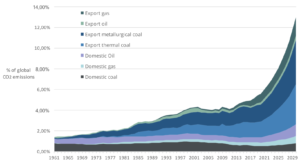