Strong evidence that every day’s delay in reducing greenhouse gas emissions makes the ultimate task more difficult (and less achievable; exploding the myth that natural gas is a safe, low emissions transition fuel to a carbon free world; hoped-for outcomes from the current COP meeting in Madrid; some Christmas suggestions; and a visual tribute to a genuine hero of 2019. Happy Christmas and let’s hope 2020 sees progress towards the creation of an environmentally sustainable world.

The 2019 Emissions Gap Report produced by the United Nations has received considerable coverage in the general media, including in P&I. The depth of the problem is illustrated by the text as much as the numbers: ‘the findings are bleak’, ‘countries collectively failed to stop the growth in GHG emissions [which] have risen at a rate of 1.5 per cent per year in the last decade’, ‘no sign of GHG emissions peaking in the next few years’, ‘deeper and faster cuts are now required’, ‘incremental changes will not be enough and there is a need for rapid and transformational action’, ‘countries must increase their NDCs (Nationally Determined Contributions) 3-5-fold in 2020’, and ‘climate protection and adaptation investments will become a precondition for peace and stability’.

One piece of data that has received little attention highlights the short-sighted and financially costly stupidity of governments. Had governments started acting on the science in 2009, emissions reductions of 3.3% per year would have given us a reasonable chance of keeping warming under 1.5oC. Action starting now requires reductions of 7.6% per year. Delaying action until 2025 will require cuts of 15.5% per year. Every day we delay matters. But let’s be honest, with emissions rising for the foreseeable future and little likelihood of the global community being determined enough to reduce emissions by 15% per year only 6 years from now, we should probably stop perpetuating the 1.5oC myth.

One major reason for the continuing increase in greenhouse gas emissions is the growth in the burning of gas, production of which is rocketing in the USA and Australia. Gas is often promoted by producers seeking profits and governments seeking jobs and revenue as a lower emissions transition fuel between coal and renewables. There are three problems with this. First, gas is not currently replacing coal, it is supplementing it as energy demand increases. Second, when emissions across the whole life cycles of the production, transport and burning of coal and gas are compared, gas is no better than coal. Third, gas has serious health and environmental hazards of its own.

By the time you read this, Madrid’s COP meeting will be all over. Next year’s meeting will be in Glasgow and will be extremely important because it’s when each of the 200 countries that are the ‘Parties’ to the Conference is due to increase its commitments to reduce greenhouse gas emissions – increased commitments that are sorely needed. So what outcomes might we look for from the Madrid meeting to help make Glasgow a success:

This may all seem rather arcane and beyond our day to day lives but although I have little faith in the COP process or the Paris Agreement the simple fact is that at present they are the only tools in the shed for avoiding catastrophic climate change.

If you are thinking of buying some new Christmas lights remember that LED lights use up to 80% less power, are eco-friendly, cooler, safer, and last 10-50X longer. You can save even more power by putting them on a timer so that they aren’t blazing away unappreciated all through the small hours, and by hanging highly reflective ornaments and mirrors nearby to achieve a similar stunning effect with fewer lights. Outside, this is also  better for the night’s insects, birds and bats.

Talking of insects, climate change, habitat loss and insecticides are wreaking havoc on their numbers. Here are five tips to help them survive: grow flower-rich plants, create insect sanctuaries, eat organic food, turn off outside lights and go green in your garden. If you’re looking for a last minute Christmas present for someone, why not give them something that is good for our insects.

The Sunday environmental round up will be taking a break for three weeks, back on January 12th. The best way I can finish 2019 is with these visual tributes to Greta Thunberg. Just 15 months separate the two photos. 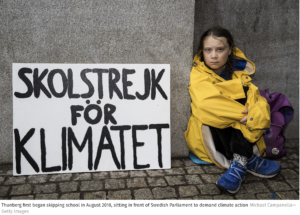