Teck Resources withdraws from an oil sands mining project in Alberta Canada and Equinor oil company pulls out of drilling for oil in the Great Australian Bight, even though the project has already received Australian government approval. Coronavirus is just one of a string of dangerous new infections caused by the clearing of forests by multinational agribusinesses. Ongoing coal mining in India is causing extreme human suffering as well as warming the planet.

There has been an interesting development in Canada where Teck Resources, a large natural resources company, has withdrawn from the environmental approval process for a Can$20 billion oil sands mining project in Alberta (whose government has a rather combative attitude to quitters). Teck CEO’s letter to the relevant Minister explains that the decision ‘will allow Canadians to shift to a larger and more positive discussion about the path forward [concerning] a broader debate over climate change and Canada’s role in addressing it [because of] an urgent need to reduce global carbon emissions and support action on climate change. … The promise of Canada’s potential will not be realized until governments can reach agreement around how climate policy considerations will be addressed in the context of future responsible energy sector development.’

Others in the fossil fuel industry play hardball in Alberta. Two cartoons – one showing a sexual attack on Greta Thunberg, the other a train ploughing through demonstrators – were made available on line for printing on decals (I had to google it) intended for workers’ hard hats at X-Site Energy Services. The creator of the train cartoon thought it was funny.

In an Australian parallel to the Teck story, the Norwegian state-owned oil company Equinor last month withdrew its already government-approved plans to drill for oil in the Great Australian Bight. ‘Not commercially competitive’ was the company’s official reason and this may well be true – no point investing millions to produce oil that is a lot more expensive than your competitors’. But the proposal also met huge opposition from environmental groups and local communities in South Australia and Victoria on the basis of environmental safety (think Deepwater Horizon) and threats to tourism and local businesses. Not to mention the urgent need to reduce not increase fossil fuel production, and particularly not to open any new fields of production.

The laws of probability say that there must be some P&I readers who also read The Australian. So those of you who cancelled your order for a new electric vehicle (EV) after reading would-be Aussie Bjorn Lomborg’s recent article rubbishing EVs might care to read Auke Hoekstra’s demolition of Lomborg’s arguments. Hoekstra is clear that walking, biking and public transport are better for the environment than any vehicle but after that EVs are a lot better than petrol driven vehicles.

According to evolutionary biologist Rob Wallace, the increased occurrence of new viruses that are harmful to humans is related to industrial model food production and the profitability of multinational corporations. Governments focus on the chaos created by each new virus but ignore the fact that many – COVID-19, Ebola, Zika – are related to the same structural factors associated with agribusiness. For example, viruses previously isolated in remote wild areas started turning up in areas of human habitation as forests were destroyed, legally and illegally, for logging, livestock production and palm oil, and as urban areas and farmland spread into the cleared areas. Forest clearing also pushes wild food operators to move even deeper into forests in search of beasts for the table, where they are likely to encounter organisms that have been safely cocooned in their traditional ecosystems well away from humans. The true source of the problem, however, lies in the centres of capital such as London, New York and Hong Kong. The remedy lies in a complete reorganisation of the way food is produced, away from multinational agribusiness towards local agroecological models.

My back of the envelope calculation suggests that the women pictured below in coal-rich Jharkhand in India are carrying about 50kg on their heads. The decades of inaction on reducing coal and other fossil fuel production, detailed in the accompanying article from Nature, have led not only to increasing levels of greenhouse gases and global warming bordering on the catastrophic. The wasted decades have also perpetuated abusive practices such as this – these women don’t look to me to be the ones profiting from this coal mine. And carrying heavy loads isn’t the only problem with Indian coal mines. 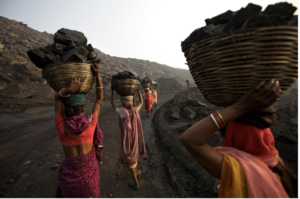