A focus on the economic aspects of climate change this week: business-as-usual will reduce global GDP but climate action is blocked by potential financial losers; the Adani mine is viable only because of massive government subsidies, while in India investment in coal facilities is plummeting; and hydrogen power seems to have some answers for Australia if the right investments are made. To combat the heat island effect, Singapore is going green.

Not for the first time, a report has found that a business-as-usual approach to climate change could reduce global GDP by 7% by 2100, with some countries (e.g. USA, New Zealand, Canada) losing 10% or more. Much of the cost arises from extreme weather events, damage to human health and reduced worker productivity. If greenhouse gases were reduced in line with the Paris Agreement the global loss of GDP would be 1%. Looks like a pretty clear economic justification for action to me.

So what is preventing governments taking the necessary action to prevent catastrophic climate change? The Real Obstacle to Climate Action suggests that the problem is not the total cost of the green transition but that it will create winners and losers. The transition winners are weakly motivated to promote action because they are widely spread across the whole population and see only marginal personal gains. The losers are well placed to resist change because they can see their personal losses more clearly and are concentrated in social and/or geographical groups: the very rich beneficiaries of the status quo and lower income groups who will lose their jobs and/or suffer higher prices on basic necessities. Compounding this is the ‘free rider’ problem: countries are reluctant to take decisive action ahead of everyone else when there is no penalty for being a late starter. The authors’ suggestions to combat these problems are less insightful, mainly involving tinkering with the current system.

‘… here there’s a gentle breeze, plenty of light, no direct sun, a sparkle off the waterfall, the fresh smell of green, and a pervading sense of peace.’ Not a description you would normally associate with bustling, high-rise, steamy Singapore. But the government and the people want comfortable outdoors rather than air-conditioned indoors as the temperature rises. So the government has sponsored ‘Cooling Singapore’, a project with 86 strategies to reduce the heat island effect, the showpiece of which is 101 hectares of the spectacular Gardens by the Bay. All Singapore’s developments and redevelopments are now required to create green space of at least the same size as the building’s footprint. Roof and vertical gardens are booming but some of the green space has to be accessible open-air public space at ground level. Where in Australia has this sort of vision?

An analysis by the Institute of Energy Economics and Financial Analysis (IEEFA) concludes that over the next 30 years Australian and Queensland government subsidies to the Adani mine will total $4.4 billion. These will take the form of public handouts, favourable deals and tax concessions, the largest of which is the federal fuel tax credit scheme. The report also notes that Adani has not paid any corporate tax since 2011 in Australia despite owning and operating the Abbot Point coal export terminal. ‘If these subsidies were not being provided, Adani’s Carmichael thermal coal mine would be unbankable and unviable’, says IEEFA. My back of the envelope calculations suggest that the Australian and Queensland governments could simply give 1,500 ‘workers’ $100,000/year each for 30 years for the same amount of money and avoid all the environmental damage. Even better, they could pay them to do something useful.

As I reported recently, Adani’s Queensland coal is destined for Bangladesh rather than India. Which is just as well as investment in coal-fired power plants in India is plummeting. In 2017, twelve coal-fired projects with a combined capacity of 17GW received US$9.35 billion. In 2018, the figures were 5 projects, 3.8GW and US$850 million. Two-thirds of this lending for coal power came from government and public banks. Total lending to renewable energy in 2017 was US$3.55 billion, of which US$2.64 billion (74%) came from private banks. As in Australia, the future of the coal industry is dependent on government support. For a more detailed analysis, read Tim Buckley.

‘So this one […] sounds like a small thing, but if you look at it in the ecosystem, it could have a hugely detrimental effect on the whole ecosystem should it not be able to continue’. Go to the top of the class if you can correctly name what the quotation is referring to (clue: it’s in NSW and it’s remarkable how concepts get co-opted for nefarious purposes).

There’s shedloads of it. It can power vehicles, homes and industry. It could be half the cost of electricity. It produces no greenhouse gas emissions. It could generate thousands of Australian jobs, many in regional areas. It’s hydrogen. 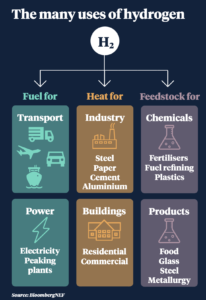