Migration is the focus this week, particularly within country migration, with stories about human migrations in Sub-Saharan Africa, Latin America, South Asia and the USA, bird migrations in Australia and bee migrations in the USA.

Sub-Saharan Africa, Latin America and South Asia contain 55% of the developing world’s population. If the world continues on its current global warming track, the World Bank estimates that by 2050 these three regions will generate  approximately 120 million internal refugees. These are people who migrate within their own countries because of the slowly emerging impacts of climate change: lower availability of water, crop failures, rising sea levels and storm surges. Policies that reduce greenhouse gas emissions globally could reduce this number to around 50 million. Catastrophes (floods and hurricanes, for example) will add to these numbers. And it goes without saying that the poorest people will be hardest hit and will have the least resources to respond. Populations most at risk of climate-induced migration are those living in coastal areas, low lying cities and rural areas exposed to water shortages. The migrations will place stress not only on the individuals who move but also on those who remain, and on the facilities and services (housing, transport, employment, education, health and social services) available in the both the source and destination communities. The World Bank recommends that affected countries should be developing policies and plans now to cope with the problems that will emerge.

The first thing that springs to many Australian minds at the mention of climate migrants is Pacific Islanders. Less considered are the Australian residents who will migrate internally as a result of increasing heat, bushfire risk, cyclones and sea level rise. On the basis of migration patterns following previous hurricanes, researchers in the USA have started to model the movements of the 13 million Americans expected to be displaced from coastal areas, principally in Florida, by six feet of sea level rise in 2100. Higher neighbouring suburbs and nearby cities are likely to receive most of the displaced, with serious consequences for the receiving areas: e.g. increased urbanisation, pressure on local services, increased property values, people made homeless by housing costs. Whether the current predictions are totally accurate is not particularly important. What matters is that despite the climate change denialism at the top in the USA, some people are starting to plan for the changing conditions to a far greater extent than is obvious in Australia. For communities continuing to build developments in crazy places though, see the final story.

Preliminary figures indicate that at least 19 birds species have lost more than half of their habitat in our summer fires and 58 have lost over a third.  Australia’s number of threatened birds, currently at 134, is set to rise by over 25%. The Southern Emu-wren and Glossy Black Cockatoo on Kangaroo Island have been particularly hard hit but so have many birds on the mainland, including Lyrebirds, Regent Honey-eaters, ground parrots, some owls and the Eastern Bristlebird. As a result of habitat destruction and shortages of food and water, some species are now being seen in previously unrecorded locations – nice at a superficial level but this has worrying long term implications for species survival.

Bushfires and cyclones are pretty obvious manifestations of climate change; declining populations of insects not quite so. Bumblebees are furry little critters that easily overheat, so they don’t like hotter climates. A study of bumblebees comparing 1901-1974 with 2000-2014 has demonstrated marked declines in populations of 66 species in North America and Europe. This is associated not with increasing average temperature but with increasing frequency of heatwaves – periods when it is simply too hot for the bumblebees to survive. Not surprisingly, then, population declines have been most marked at the southern, warmer end of the bees’ range and there have been some, but much smaller, increases at the northern, cooler end. Heatwaves aren’t the only threat to bumblebees: habitat loss and pesticides are also significant. Bumblebees are important pollinators of not only wild plants but also crops such as fruits, veggies and nuts, particularly at higher altitudes and at the beginning and end of summer because of their tolerance of cooler temperatures. It is likely that bumblebees are not alone in their sensitivity to extreme heat, as we know in Australia (where there are no native bumblebees) from the experience of fruit bats. Apart from limiting global warming, bee survival can be assisted by avoiding the introduction of non-native bees which can spread diseases, reducing the use of pesticides, re-establishing flower-rich grasslands, and creating bee-friendly parks, median strips and gardens. There’s also a role for citizen science in monitoring bee populations.

Nothing to do with migration, unless it makes you want to emigrate, but this might amuse you. I’m sure many of you already know about Juice Media but just in case you’ve been missing out on the fun, you might enjoy this example of their work. Best not to watch it with the grandkids, although Juice are now making PG versions of their videos.

Looks like some of the residents of South Carolina in the USA might have to relocate in the not too distant future. I strongly recommend the short videos in the linked story. 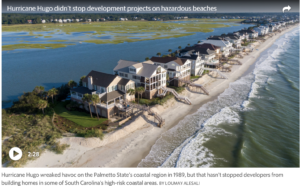