A strong emphasis on economic, ethical and equity issues associated with climate change this week. Global warming has increased inequalities between rich and poor nations; tackling climate change and reducing inequalities must occur simultaneously but only rich and powerful nations and individuals have the resources required to do it; even low emitting nations have a responsibility to contribute to global efforts to fight climate change; and action on climate change makes economic sense but we should do it even if it didn’t. Is Theresa May’s commitment to reach zero emissions in Britain by 2050 all it seems? And to lighten the load, watch nesting White-bellied Sea Eagles live.

It is well known that the countries that have pumped the least amount of greenhouse gases into the atmosphere over the last two centuries (that is, the poorest countries and ones that for the most part continue to be very low emitters) are the ones most at risk from climate change, for instance countries in Africa, Asia, the Pacific and South and Central America (the ‘Global South’). Now, a study has confirmed that between 1961 and 2010 global warming has increased economic inequality between the rich, high emitters and the poor, low emitters.

The study found that compared with a hypothetical world that had not experienced global warming during this period, increasing temperatures had reduced economic growth by around 25% in the hotter, poorer countries at low latitudes (e.g. India) and actually increased growth by about the same percentage in cooler, richer countries at higher latitudes (e.g. Norway). This is not to say that global warming has sent poorer, hotter countries into recession, their economies have grown, but by about 25% less that they would have without global warming over the 50 year study period.

So, not only have rich, heavy fossil fuel using countries become rich in large part because of burning fossil fuels for the last 1-2 centuries but also their continued burning of fossil fuels is continuing to make poorer countries poorer than they otherwise would have been. Those Australians who argue that there is no point in Australia cutting its greenhouse emissions because we are such a low source of emissions (despite the fact that we rank about 14th in current and cumulative emissions) might consider the ongoing economic and social harm we are causing to poorer nations as we continue to burn fossil fuels and have particularly high emissions per capita. Or maybe it wouldn’t make any difference to them.

Faced with the seriously urgent threat of rising sea levels, Fiji’s Prime Minister Bainimarama has no doubts about the responsibilities of countries with low emissions: ‘[Low lying nations] are very small emitters, be we cannot afford to be fighting [climate change] from the rear’. This from an article in Time about the leaders of small ‘sinking’ countries banding together to successfully influence global climate change negotiations. When Time writes about climate change in terms of ‘crisis’, ‘urgency’ and ‘existential threats’, things must be getting serious.

Continuing the equity theme, Tom Athanasiou identifies a number of publications (e.g. Wallace-Wells’s ‘The Uninhabitable Earth’ and last year’s IPCC 1.5oC report) and events (e.g. the Extinction Rebellion demonstrations) that have pushed the ‘climate emergency’ concept onto the scene. According to Athanasiou, ‘We know how much trouble we’re in, but we don’t know what we’re going to do about it [and a believable transition strategy] can only be composed if and when we face the justice side of climate change’.

To do this we must examine the extreme economic inequality in ‘the twice divided world’: rich and poor people (half of the world’s population receives less than 10% of its income) and rich and poor nations (the Global North and South). Why? Because the rich (individuals and nations) produce the vast majority of greenhouse gases – the richest 10% produce 50% of emissions. And of course the very rich are also the very powerful.

To effect change, Athanasiou recommends getting rid of the lies, supercharging the Green Revolution and visionary planetary-scale cooperation to produce global solidarity. This will be possible only if economic inequality is simultaneously mitigated. For this to happen the power-controlling rich nations and super-rich individuals will have to provide the trillions of dollars necessary, because the poor and powerless don’t have any to contribute. So far so good but I am less optimistic than Athanasiou that the Paris Agreement holds the key to this transformation.

Different but complementary perspectives on the economics of tackling climate change have recently been presented in The Guardian by two well-known economists. Nobel laureate Joseph Stiglitz dismisses ‘Can we afford it?’ criticisms of the proposed Green New Deal in the USA by arguing both that the USA can afford it and more importantly that it cannot afford not to act. Stiglitz compares the current existential threat posed by climate change with the Japanese attack on Pearl Harbour; no one then asked, ‘Can we afford to fight the war?’. On top of which, a correctly-waged war on climate change would stimulate demand and be good for jobs and the economy. Australia’s own Richard Dennis, in a well-argued and amusing piece, agrees that tackling climate change makes economic sense but also asserts that even if it didn’t it would still be the right thing to do. Highlighting some of the personal and government decisions that ignore any rational economic analysis, Dennis says ‘… what does it say about Australia if we are only willing to save ourselves, and our kids, if we can get a good deal on the price of renewables?.

Readers will probably be aware of Theresa May’s last minute attempt to bolster her legacy by legislating net zero greenhouse gas emissions for the UK by 2050. Good news? yes; vastly better than Australia? yes; all that’s necessary? far from it. Kevin Anderson, the always blunt, tell-it-as-I-see-it academic, identifies serious problems with May’s commitment: the UK’s continuing investments in fossil fuels, particularly oil and gas and for aviation; reliance on unproven negative emission technologies; proposed use of international carbon credits (like paying a poor person to mourn in your place at a funeral); and overestimating how much of the carbon budget the UK is entitled to take and giving themselves too much time to reach zero. (The government has subsequently clarified in parliament that they don’t intend to use carbon credits.)

And to relax you, why not check out Eagle Cam, the live stream of two White-bellied Sea-Eagles preparing their nest for the breeding season at Sydney Olympic Park. 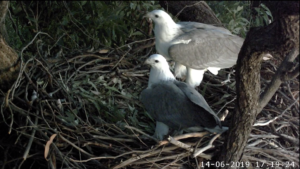