PETER SAINSBURY. Sunday environmental round up, 17 May 2020

In the absence of urgent climate action, rising temperatures over the next 50 years will render much of the globe uninhabitable for humans and trees. But global fossil fuel consumption is still rising and a NSW coal company has repeatedly and grossly underestimated the CO2 emissions when its coal is burnt. A pandemic caused by a coronavirus: what a surprise. NOT! And Madagascar’s remarkable flora and fauna.

Human beings thrive in a very narrow range of mean annual temperatures: roughly 5-25oC (mostly 11-15oC) where conditions are good for human health and food production. New research finds that, without rapid action to reduce greenhouse gas emissions, up to three billion people are likely to live in conditions that are hotter than are suitable for human life to flourish in 2070. Los Angeles and Paris will experience desert-like temperatures and cities in Africa and Asia will have deadly heat waves every year. Without migration, an option not available to all, one-third of the global population (about 3.5 billion people in 2070; of which 1.2 billion will live in India) will reside in areas where the mean annual temperature is warmer than 29oC. These hot areas will cover 19% of the world’s land surface in 2070, including most of northern Australia from Exmouth to Cape York. Currently such conditions are experienced over less than 1% of the world’s land, mostly in the Sahara.

Part of the explanation for these high temperatures lies in the fact that the average temperature increase over land is about double the overall global temperature increase because the oceans warm more slowly than the land. And looking at where people actually live, the average is about 2.3 times greater than the global increase – an average global increase of 3.25oC will translate into an average increase of 7.5oC in inhabited areas. Needless to say, it will be those with least resources to cope with these temperatures (e.g. people least able to move, install renewable energy-powered air conditioning and afford expensive imported food) that will suffer the most. Without immediate climate action, the changes over the next 50 years will be greater than any experienced in the previous 6,000.

A real surprise emerging from this research was the comment by Michael Mann, one of the world’s most respected and outspoken climate scientists (not associated with this research): ‘The good news is that it doesn’t appear we’re headed on that trajectory [to a largely uninhabitable planet] now, given the progress already being made world-wide in transitioning away from fossil fuels.’ Really?? That’s not my reading of the situation – see the graph below demonstrating still increasing fossil fuel consumption. It doesn’t matter what promises are made by corporations and governments; it doesn’t matter how much renewable energy we install; until fossil fuel consumption approaches zero, greenhouse gases will keep accumulating in the atmosphere and global temperatures will keep increasing. 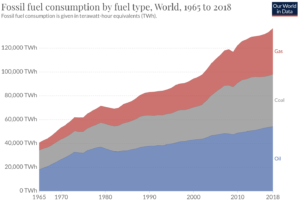 It’s not only humans that are going to roast and die as temperatures soar. Ten years of research on tree mortality concludes that ‘most trees alive today won’t be able to survive in the climate expected in 40 years’. Although warmer conditions and more CO2 in the air is causing some ‘greening’ in some locations, this is being outpaced by increased tree mortality due to warmer temperatures, drying of the soil, droughts and insect infestations, compounded by fewer seeds produced and poorer conditions for germination for those that are. At the current pace of warming, much of the world will be inhospitable to forests as we know them within decades and its possible that none of the trees alive today will be able to survive the projected climate. A temperature increase of 2oC may be the threshold beyond which mass arboricide occurs.

Centennial Coal’s mines supply about a third of the coal burnt in NSW power stations. It turns out that when they’ve been estimating the carbon dioxide emissions from burning their coal (scope 3 emissions) – as required by the NSW Department of Planning during the development application process – they have repeatedly grossly underestimated the emissions. And when I say ‘grossly’, I mean by a factor of 10, or on one occasion 30. It’s not as though it’s a difficult calculation to make: basically just multiply the tonnage of coal by 2.4 to get the tonnage of CO2 released. And yet on five occasions over the last decade the error was missed by the consultants who prepared the environmental impact statement for Centennial, Centennial themselves and the Department of Planning. Explain that if you can. A spokesperson for Centennial said they had ‘stuffed up’ and the NSW Department of Planning is apparently investigating. So, who discovered this stuff up? The consultants, Centennial Coal, the Department … when one of them was conducting a best-practice, internal quality assessment exercise? No, the NSW Nature Conservation Council.

COVID-19 was not a ‘black swan event’, not a bolt from the blue, not completely unexpected and unpredictable. Coronaviruses and their natural hosts, in southern China particularly, have been studied for decades by scientists from many countries. They knew that the changes that humans were making in the natural world rendered it only a matter of time before one coronavirus jumped across to humans. They warned anyone who would listen; some did listen, but not enough or not consistently. Broadly speaking, there are three ways that environmental changes influence emerging infectious diseases. First, changes in land use – deforestation and the introduction of settlements, agriculture and resource extraction into wild areas – pushes potential pathogens and humans closer together. Second, global warming and rainfall changes are expanding the areas inhabited by insects that carry disease (such as mosquitos and malaria) and exposing more humans to the danger. Third, warming is releasing some viruses that have been locked away in the ice; for instance, anthrax was released from a thawed reindeer carcase in 2016.

Even if you don’t read the text, have a look at more of the fantastic pictures of Madagascar, its country, animals and people. 90% of its fauna and flora are found nowhere else on earth. On the negative side of the ledger, 90% of its forests have been lost since humans arrived. 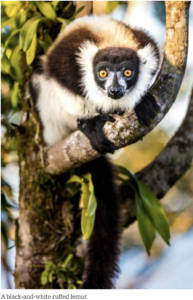 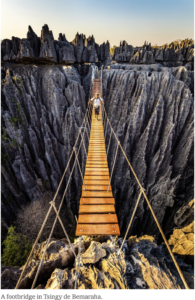