The bushfires – which aren’t really an appropriate topic for an environmental blog as we all know that they aren’t related to climate change and even if they were it would be insensitive to discuss the link at this moment – have dominated the news this week. One of the most remarkable contributions to the discussions has been the very public statement by five ex-fire chiefs, on behalf of a larger group of 23, of their assessment of the unprecedented situation. Their message is clear: the bushfire emergency is underpinned by the climate emergency. According to Greg Mullins: ‘climate change is supercharging the bushfire problem in Australia and overseas’. These very experienced fire fighters – ‘shouty Australians’ in the PM’s dismissive jargon,  despite their suits and Australian honours – express their serious concerns for the safety of emergency workers and the physical and mental health of community members and of their own children and grandchildren. They have been trying to see the Federal government since April to warn them of the coming dangers and impress upon them the need for more resources and equipment to fight the fires and for urgent action on the fundamental problem, the burning of fossil fuels that is creating climate change. But, Greg Mullins again: ‘this [Federal] government fundamentally doesn’t like talking about climate change’. For a very blunt assessment of the political problem in Australia, watch the video between minutes 19 and 22.

Climate change isn’t the only problem caused by the burning of coal. Fly ash, a problem I touched on in March, is a major issue in Indonesia as this short video illustrates. If Australia were serious about combating climate change, we would not only be reducing our domestic greenhouse gas emissions and rapidly reducing the coal (and gas) we export but also assisting our less wealthy neighbours to make their own transition to 100% clean, healthy renewable energy. We wouldn’t want our kids living, playing, going to school in air like that experienced by children in West Sumatra.

I realise it is hardly on the same scale as the ill-health and death caused by bushfires and air pollution but I am nonetheless sad to report that my joyous report last week that both of Sydney’s Sea-eagle chicks had fledged was premature. One was found dead during this week, apparently from lack of food. See the Diary entry for 6 November for more details.

The International Energy Agency released its annual World Energy Outlook this week, identifying several factors that will significantly influence energy trends to 2040. While there is some good news, it is mostly overwhelmed by the bad. Renewable energy, particularly solar and off-shore wind farms, continues to get cheaper and grow its share of total energy output. By 2030 it is expected to produce 42% of global energy and to have overtaken coal as the largest source. But greenhouse gas emissions will continue to grow because energy demand will keep growing and fossil fuels, particularly coal and gas, will still be pumping out those harmful molecules. The sale of electric vehicles will continue to surge but so will the sale of petrol guzzling SUVs; currently they account for 42% of worldwide sales. I know I sound like a broken record but this emphasises yet again that we must change the supply side of the equation, not rely on billions of consumers individually changing their personal demands. Third, energy efficiency improvements in new homes and commercial buildings are stalling. Finally, urbanisation in Africa is set to take off rapidly. The challenge will be to help African nations do it on a cleaner path than those in Asia have followed.

The CEO of Adani Ports, the division of the company that runs its export and import terminals in India and overseas, including the Abbott Point coal terminal in Queensland, is quoted in the Australian Financial Review –  by a journalist who travelled to India as a guest of the Confederation of Indian Industry – as saying: ‘Our target is [for our ports] to be carbon neutral by 2025’. Reassuring … NOT! (You’ll need to Google ‘Adani boss bullish on company’s carbon neutral future’ for the AFR article.)

If you’ve been wondering where the Adani Carmichael mine is up to these days, I can report that construction of the mine site is going ahead with lots of national and local subcontractors doing their bit. I know because I and six other health professionals were arrested on Wednesday morning for barricading the construction workers’ camp about two hours from Clermont in central Queensland. Our action had several goals: to obstruct and delay the building of the mine; to highlight that climate change is a major health issue, already damaging human health and causing premature deaths, and that this will inevitably get worse; to pressure the Federal government to take urgent action on the climate emergency and the related health emergency; and to demonstrate, like the ex-fire chiefs, that ‘shouty Australians’ are ordinary Australians who are truly concerned about and committed to protecting the health and safety of our fellow citizens. It is the members of the Federal government, individually and collectively negligent, who are the real threat to safety here. 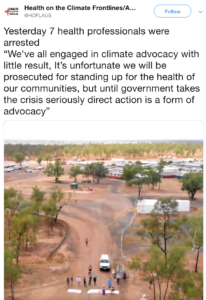 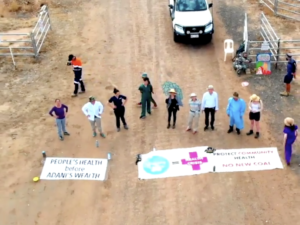