Sunday environmental round up, 18 August 2019

A new report from the IPCC focusing on land and climate change draws together many threads from the environmental and social crises facing the world. CO2 emissions from fossil fuels are of course the major cause of global warming but methane from fracking and tipping points in earth systems also magnify the problem. Victorians send a very clear message to their government about how much they value and want to preserve their native public forests.

Many readers will already be aware of the recent report – Climate Change and Land – by the UN’s Intergovernmental Panel on Climate Change (IPCC). It is impossible for me to summarise it here. I will, however, make some comments. First, the report’s subtitle: ‘An IPCC Special Report on climate change, desertification, land degradation, sustainable land management, food security, and greenhouse gas fluxes in terrestrial ecosystems’ provides an excellent indication of the report’s ambitious and comprehensive scope, and emphasises the interconnected nature of all these issues. Any one cannot be understood or tackled without looking at them all. Second, in general interconnectedness is good news because well-designed actions in one domain produce co-benefits in others. But there can also be contradictions and trade-offs, for example using land to produce biofuels may cause problems with food security and biodiversity. Third, including land tenure, poverty and public health in the subtitle would also have been appropriate in terms of highlighting the report’s concerns. Fourth, farming is a cause of global warming and land degradation and it experiences many of the problems but it’s also part of the solution. Fifth, as the report makes clear, the window of opportunity for effective action is closing rapidly. Sixth, to beat one of my drums again, individual behaviour change is important for a variety of reasons but the problems are not going to be solved by eight billion people becoming vegetarians or vegans. Political action is more important. Seventh, ‘Climate Change and Land’ is a scientific report that presents evidence about the problems, the causes, the threats and potential solutions. It does not tackle the hard political task of making change happen. For those wanting more, the most comprehensive but concise summary of the report is probably to be found in the report’s Headline Statements. The New York Times has produced a more reader-friendly summary of some aspects.

Perhaps drought-tolerant hybrid maize is part of the solution. This apparently good news story from Kenya is part of the Stress Tolerant Maize for Africa project run by the International Maize and Wheat Improvement Center.  (Apologies if I’ve got this one all wrong and the Center is a front for the CIA or Bayer-Monsanto. If so, please tell us all.)

Up to now the increases in greenhouse gas emissions, the concentration of greenhouse gases in the atmosphere and global surface temperatures have been broadly linear – each one increasing relatively smoothly and in a reasonably predictable manner. However, we are increasingly aware of the risk of tipping points in some of Earth’s physical and biological systems. A tipping point occurs when what appears to be a small additional change in a system results in a fundamental change such that there is no way back. Think of a rose bud: it steadily grows bigger but once it bursts into flower there’s no way of re-packing it all into the bud. Four of the Earth’s features are particularly vulnerable to crossing a tipping point in the foreseeable future – melting of the Arctic permafrost, Amazon deforestation, warmer oceans destroying marine food chains, and melting glaciers causing sea level rise. Making matters worse is that once the Amazon rainforest or the Arctic permafrost crosses its tipping point: (1) instead of being part of the solution to climate change (by being carbon sinks that absorb and/or  store massive amounts of carbon), they will exacerbate the problem by becoming massive reservoirs for the release of more greenhouse gases into the atmosphere, creating a vicious cycle; and (2) unlike emissions from burning fossil fuels, greenhouse gases originating from forest diebacks and melting tundra will not be controllable by humans and we may have runaway climate change on our hands.

Carbon dioxide is the main one but it isn’t the only greenhouse gas that’s been increasing in the atmosphere. Over the last decade levels of methane, a very potent and health-damaging greenhouse gas, have been rising steeply. Research has now demonstrated that the main culprit is fugitive emissions associated with the fracking boom in the USA and Canada where, incredibly, between 2005 and 2015 gas from shale deposits increased from 31 to 435 billion cubic metres – 90% in the USA. Because methane is a relatively short acting greenhouse gas, stopping fracking (which Trump has no intention of doing) would make a useful contribution to limiting global warming between now and 2050.

Returning to land use, the Victorian government has just released the results of the first of three phases of the Future of Our Forests community engagement process to inform a vision for the management of Victoria’s public native forests, including the modernisation of Regional Forest Agreements (RFAs). Almost 5,000 people participated in an online survey and face to face meetings, including a Youth Forest Symposium. The (encouraging) top three common themes  and top three goals of forest management are shown below. While most people believed that timber harvesting of native forests should be stopped, regional respondents had a higher concern for jobs and economic opportunities than city slickers. Let’s hope the government acts on what the majority of Victorians are telling them. 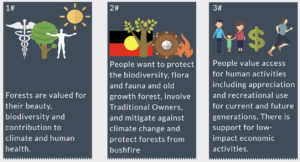 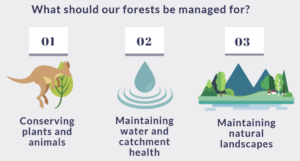