There’s a plan to decarbonise the industrial sector by 2070 but the burning question of the moment is whether coronavirus will spell the end of the line for fossil fuels. I doubt it but coal, oil and gas are all struggling in different ways. Getting bored? Build a hotel.

About one third of global greenhouse gas emissions come from industrial processes – the production of iron and steel, chemicals and plastics, cement and aluminium mainly (see pie chart below from Inside Clean Energy newsletter for 9 April). China in particular and Asia in general account for the vast majority of emissions in all these processes. Industrial processes will be among the most difficult sectors to decarbonise, but not impossible. Despite the wide range of industries and processing plants involved, new research has identified ways to eliminate these emissions by 2070, principally relying on electrification, energy conservation, material substitution, hydrogen fuel, recycling and carbon capture use and storage. The authors emphasise the need for more funding for the development of the necessary technologies, carbon pricing and government purchasing of low carbon materials. 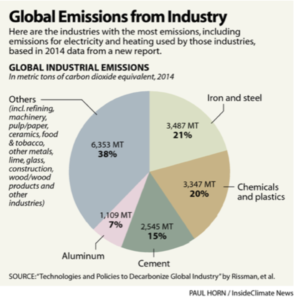 The big question for all fossil fuel companies at present is what will happen to demand for their products once the global COVID-lock down is released? Will fossil fuel’s aggregate share of energy production stay strong, with oil and gas continuing to displace coal while renewables supply the increasing demand for energy but don’t actually replace fossil fuels? Or will governments, investors and consumers finally respond to the urgent need to reduce greenhouse gas emissions, increase investment in renewables and reduce the demand for fossil fuels? Australian shareholders are certainly getting testy with Santos’s failure to align its plans with the Paris Agreement.

Oil prices have plummeted recently as a result of the COVID-induced reduction in demand and a price war between Saudi Arabia and Russia. This has led to predictions of oil company bankruptcies and possibly the rapid demise of the whole oil industry – which the environment might celebrate. Not surprisingly, and with thanks to Adam Hanieh, the situation is rather more complex.

Oil is not simply a very convenient, energy-dense, flammable liquid. During the 20th century it generated oil-centred capitalism and became central to global geopolitics. The high price of oil in the early 21st century allowed the USA to develop their expensive to exploit non-conventional sources (e.g. shale oil) and become not only a net oil exporter but by 2013 the world’s largest producer. By flooding the market with oil in the last few weeks, and hence lowering its price, the Russians and Saudis are probably hoping to make US oil production uneconomic and force some of the producers out of the market. Then along comes COVID. Oil can be bought for US$10-20 a barrel, oil companies slash their spending on exploration and construction, and some start filing for bankruptcy.

So far so good for the environment but this is where oil’s central position in the global and national economies kicks in. Oil companies have built up large debts in recent years and defaults would have serious consequences. Shock waves would flow through financial markets similar to 2008 and bankruptcies of smaller oil companies would allow ‘Big Oil’ (e.g. Exxon, Shell, BP) to buy up their more valuable assets. These mega-companies, that already have enormous influence over governments, would use the COVID-induced economic downturn to argue for further relaxation of environmental controls to stimulate economies.

This is already happening in the USA and we all know which way Trump will jump. Beyond the US, the rich oil-producing Gulf states are similarly likely to consolidate their position at the expense of developing nations that produce less oil (e.g. Nigeria and Ecuador and some of the USA’s currently favoured nemeses such as Venezuela, Iran and Iraq). COVID-19 may see considerable mortality among smaller oil producing companies and states but it is unlikely it will send the oil industry into a rapidly terminal condition. (During the last few days the major oil producing nations have agreed to cut oil production by about 10% per day but the precipitous COVID-led fall in demand remains.)

Oil’s problems are not all recent. Over the last decade the five major oil producers (Chevron, Total, ExxonMobil, Shell, BP) have seen at best sluggish growth in their share price. Even before COVID struck, only Chevron’s share price was higher than in 2010 and even its performance was unimpressive. Maybe potential share buyers are put off by the fact that only 60% of the Famous Five’s dividends and share buybacks have been funded from profits. The rest has come from borrowing and asset sales, hardly the sign of a thriving business with a solid future. 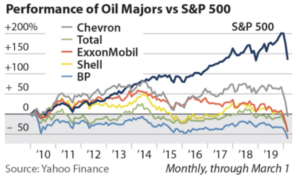 In fact the bankers at JPMorgan Chase, Wells Fargo, Bank of America and Citigroup are getting so nervous about companies defaulting on debt repayments that they are establishing their own oil and gas companies. Their aim is to pick up and manage the assets of smaller, debt ridden companies as low prices and low demand send them broke rather than simply repossessing the assets and selling them at fire-sale prices to the bigger oil companies that are better able to ride out the storm.

Talking of dodgy prospects, coal’s death spiral continues with at least 126 globally significant financial institutions (banks, insurance companies, asset managers) now having formal policies that exclude or limit investments in thermal coal mining and coal fired power plants. Around twenty new or enhanced policies have been announced so far in 2020, with two large Japanese banks (Mizuho and Sumitomo Mitsui)  recently adding to the list. Although Japan has no coal mines it is a major funder of coal infrastructure in developing countries and even lending policies with holes are a significant step forward.

Believe it or not, you can build a hotel on spare land around your home without any planning approval whatsoever. And even if the accommodation gets a little crowded you won’t contravene any public health orders concerning social distancing. You don’t even need to consult the neighbours, although a joint venture might attract more guests. So while you’re confined at home, why not survey your property, draw up the plans, order the materials and start building. You might spawn an empire.

I’m finishing with an auditory treat rather than a visual one this week. Not sure how many readers I have in tropical Queensland but to encourage more to hop on to the P&I website here is the call of not just one but two White-lipped Tree Frogs from the Daintree National Park.