Excess heat will be responsible for 8.5 million deaths per year by 2100. Russia possibly developing plans for adaptation to climate change but Australian politicians continue to rage against the dying of the coal-generated light while investors flee coal companies. Meanwhile an Australian hero works for a just transition.

To start, here is an account by Linda Groom of a journey through the Kosciuszko National Park earlier this week. It highlights the increased threats now posed to native flora and fauna by feral animals and the opportunities presented by the devastation to governments to undertake some much needed feral species control.

‘More people will die from climate-driven temperature changes in 2100 than the number who die today from all infectious diseases’ the US Congress was recently told. Results emerging from not yet completed research indicates that in 2100 there will be 85 deaths per 100,000 people attributable to heat. If we assume a global population of 10 billion, this translates to 8.5 million deaths per year. The researchers (economists) calculated that this temperature-driven mortality alone generates a social cost of carbon of US$24 per ton of carbon emitted. The total social cost of carbon (the cost of the health, social, environmental, economic etc. damages done by carbon emissions) is probably more than four times higher. That plus government subsidies to fossil fuel companies is the price the community is paying for ‘cheap’ coal and ‘cheap’ electricity (see Canavan’s letter below).

Russia is the world’s fourth largest emitter of greenhouse gases, currently responsible for 5% of annual global emissions. So it’s difficult to know what to make of their first climate change adaptation plan. It’s good that Russia is acknowledging that droughts, floods, forest fires and infectious diseases arising from climate change will have serious effects on economic development, living conditions and human health, and that kids should be taught about climate change in schools. Not so good that the plan lacks operational details and urgency and the commitment to reducing emissions is vague at best. Also worrying is Russia’s explicit desire to take advantage of Arctic warming to open up shipping routes and oil and gas mining opportunities. Still, I suppose that they are at least recognising the existence of anthropogenic climate change and the need to start taking action. In comparison, watch Pauline Hanson on Channel Nine’s Today show earlier this week. In fairness to her, I suspect that blissful ignorance rather than wilful deceit explains her statements on climate change.

Which is more than I can say for Minister Canavan. Many readers will be aware of the recent wrath vented on Siemens (the self-proclaimed ‘global powerhouse’ of electrification, automation and digitalization) over their decision to provide the signalling technology for the rail line that needs to be constructed to deliver coal from Adani’s Queensland mine to the world. In reviewing their decision Siemens sought the views of the Minister. We are indebted to Siemens for making Canavan’s response public – please do read it. His ability to incorporate so much anger and invective and so many unsubstantiated assertions and allegations into a single page of prose demonstrates considerable rhetorical genius. Logic and evidence don’t seem to be such a strong point for the Minister, however. (Just by the way, Senator Canavan’s brother John is Managing Director of Winfield Energy coal company and a former Peabody executive – google ‘Matt Canavan’s family obsession with coal’ for an AFR article.)

Sharan Burrow is an unsung Australian hero. Many will remember her as President of the ACTU but these days she is General Secretary of the International Trade Union Confederation. She is a strong and honest voice for a just transition: action that combats climate change and protects affected workers and communities, especially those in dying fossil fuel industries. This 5-minute video profiles Sharan’s realistic but caring approach to the economic and industrial changes that climate change makes inevitable and the just transitions that will be required for individual welfare and social harmony.

When is the best time to sell Australian coal mining shares? Answer: 9 months ago. When is the next best time? Answer: Now.

The graph below (a bit messy but quite simple really: January-December 2019 on the horizontal axis, share price change on the vertical) shows the change in share price of selected Australian companies. Since early 2019 the share prices of four Australian coal miners have fallen dramatically: Whitehaven Coal (down 37%; red line); New Hope Corp (down 37%; black); Coronado Coal (down 32%; yellow); Yancoal Australia (down 18%; purple). Meanwhile, Wesfarmers (green), which exited coal mining in 2018, rose 27% and the overall Australian equity market (blue) rose 20%. According to Tim Buckley, 2019 may have been the tipping point when global capital markets accepted the technology-driven inevitability that sustainable clean renewable energy is replacing coal. The complete demise of coal may take a couple more decades but investors see falling profits and stranded assets and are not hanging about: ‘financial markets are not waiting to see if the Paris targets might be met’. This is reinforced by the decision of BlackRock (and here), the world’s largest fund manager, to progressively reduce its exposure to coal, and the remarks of Mark Carney, recently retired Governor of the Bank of England, about the future of fossil fuel companies in general. 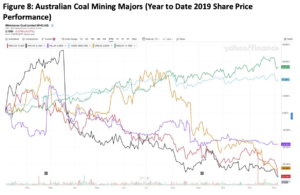