Despite the rhetoric of support for action to combat climate change from senior company executives and members of government, banks and rich nations continue to fund the development of coal mines and power stations, even in countries that currently don’t have any coal power. Centuries of abuse of waterways leads to problems along the Mekong River and in the Everglades, and plagues of locusts devastate crops in East Africa.

In the three years following the Paris Agreement (2016-2018) US, Canadian, European, Chinese and Japanese banks provided US$1.9 trillion of finance to fossil fuels: tar sands oil, Arctic oil and gas, ultra-deep water oil and gas, fracked oil and gas, liquefied natural gas, coal mining and coal power. The total has increased each year and a third of the total went to 100 of the largest fossil fuel companies to finance expansion! JPMorgan Chase is the biggest funder (US$195 billion over the three years) but Wells Fargo is closing fast on them. Bankers obviously know something climate scientists don’t.

One of the craziest, most short-sighted, most counterproductive aspects of the climate change problem has to be the funds that the rich world continues to provide as aid funding and loans to help developing countries build fossil fuel facilities – mines, pipelines, power stations, etc. New coal plants are planned or under construction in 60 countries and many of the poorer ones have no (15 countries with known expansion plans) or very little (11 countries) dependence on coal-fired power stations. It makes no sense at all to build up their dependence on coal when the future, if there is one, lies elsewhere. There isn’t even a short term pay-off for the investors as most of these facilities take years to start turning a profit. Installing coal-fired power is simply creating a transition problem a few years down the track for these developing countries and a stranded asset for the owners. It makes much more sense for the west to help developing countries leap frog fossil fuel dependence completely and move directly to clean, healthy, cheap renewable energy to power their social and economic development.

So, what to make of Boris Johnson’s recent announcement that the UK will no longer support the development of coal mines and power plants overseas? ‘There is no point in the UK reducing the amount of coal we burn if we then trundle over to Africa and line our pockets by encouraging African states to use more of it,’ Johnson said. It seems at first glance like a bold step forward but critics point out that it is really simply a formal statement of what has been UK policy for several years and that the UK will, as Johnson also said, continue to support oil and gas facility development. The most generous interpretation is that Johnson’s announcement is the first step in a rapidly escalating exit from all fossil fuel investment for the UK and provides encouragement for other countries to emulate … SOON.

More realistically, it’s important to be clear that no matter what their rhetoric, justifications, lies or obfuscations any government or company that provides funds or technical assistance for the expansion of fossil fuels is ignoring the Paris Agreement, is an active participant in increasing the levels of atmospheric greenhouse gases and is a willing party to human suffering and premature death.

Encouragingly, Indigenous and local communities throughout the world are fighting to halt the development of fossil fuel infrastructure that is destroying their culture, land, nature, food sources and lives as this two-minute video from Uganda demonstrates.

Wetlands and river systems have been abused terribly over the last 150 years, as illustrated by two vastly different stories. The Mekong River rises on the Tibetan plateau and flows through China, Laos, Myanmar, Thailand, Cambodia and Vietnam. It is now littered with dams that have severely disrupted its flow patterns, a problem exacerbated when the monsoons fail, with serious consequences for the river’s ecology, agriculture and bordering communities.

From the other geographic and economic side of the world, this part encomium, part elegy describes the wonders of Florida’s Everglades National Park, wonders that are unfortunately disappearing. Dredging, levees, floodgates, river straightening and drainage for farming and urban development have reduced the Everglades ecosystem by a half. And the half that remains is threatened by pollution, sea level rise, increased water salinity and invasive flora and fauna, including 5 metre-long Burmese pythons that are devastating marsh rabbit, raccoon, otter and bird populations. Florida sponsors annual python-killing competitions (comments from feral horse lovers welcome).

Moving on to human lovers, the dating website OkCupid now allows partner-seekers to explore the climate change credentials of their potential dates. It seems that mentioning Ms Thunberg in your profile is good for credibility in this respect.

We don’t hear much about locust plagues these days but the worst one in 70 years is currently devastating East Africa, further threatening food supplies in a region already suffering food insecurity. Single swarms can cover several hundred square kilometres and eat as much in one day as 85 million people. The plague is likely to spread to the Middle East, Pakistan and India. Unusually wet weather caused by warming of the Indian Ocean is one cause of the proliferation. 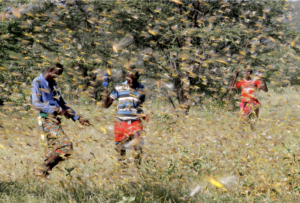